Even though the economy grew at its slowest pace since 2011 in the fourth quarter of 2012, the housing market over-performed in comparison. David Blitzer, Chair of the Index Committee at S&P Dow Jones Indices, describes the market as "punching above its weight": while residential construction makes up just 2.5 percent of total gross domestic product (GDP), it was responsible for 10 percent of GDP growth in 2012.

New home sales (Table 2) were especially strong, gaining 15.6 percent in January 2013 (28.9 percent higher than in January 2012). Inventory shrank to 4.1 months; this is in spite of the fact that new home completions rose by 6 percent (Table 1). In fact, completions have consistently been 200,000 to 300,000 units higher than sales (both on a seasonally adjusted annualized basis). 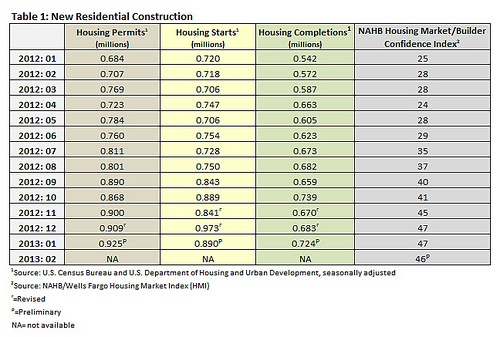 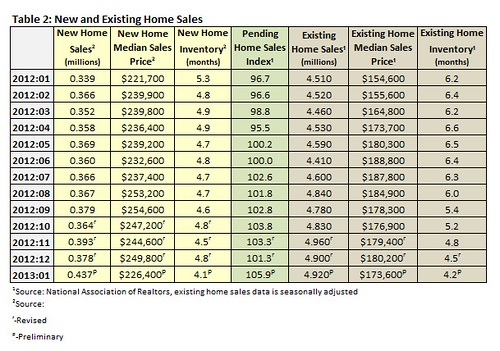 While both the Census Bureau (new home sales) and the National Association of Realtors (existing home sales) reported lower median sales prices in January, the more credible source of home price data is S&P’s Case-Shiller Home Price Index. This index reported significant gains in 2012: the National Composite rose by 7.3 percent in 2012. The S&P’s Blitzer had this to say about the data:

“Home prices ended 2012 with solid gains. Housing and residential construction led the economy in the 2012 fourth quarter. In December’s report all three headline composites and 19 of the 20 cities gained over their levels of a year ago. Month-over-month, 9 cities and both Composites posted positive monthly gains. Seasonally adjusted, there were no monthly declines across all 20 cities.”

While new residential construction statistics were mixed (starts decreased by 8.5 percent) permits continued to point to growth; they were 1.8 percent higher than in December at a seasonally adjusted annual rate of 925,000 (Table 1).

Many analysts, however, believe even if the economy falters in 2013, the housing market will continue to outperform the overall economy.

Supply chain
Australia: Demand for New Housing & Lumber Collapses
In March 2020, before the COVID-19 pandemic gripped the global economy, there were 15,386 new dwellings approved in...
END_OF_DOCUMENT_TOKEN_TO_BE_REPLACED

Housing Market
March Housing Starts Freefall in Wake of Pandemic
Not surprisingly, US homebuilding dropped sharply in March as the COVID-19 pandemic continues to wreak havoc on...
END_OF_DOCUMENT_TOKEN_TO_BE_REPLACED