Despite US stocks having lost significant ground this summer—the Dow is currently down over 1,300 points from its all-time high in late-May—the US dollar remains strong, which has kept interest rates low and buoyed housing through the construction and selling season. Housing starts for July were up, which—with the exception of a temporary dip in May—is a continuation of the positive numbers this segment has posted since early spring. 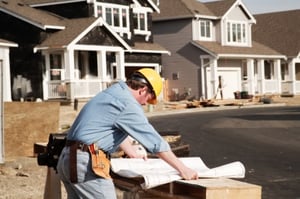 After three consecutive months of concentrated growth in multi-family housing, July was an excellent month for single-family construction; this segment posted a 12.8 percent increase (782,000 units) above the revised June figure of 693,000. August home builder confidence is up another point over last month to a level of 61, which is the highest it has been since November, 2005.

The news was not all positive, however. The long-term trend for the 30-year fixed mortgage rate continues to inch upward, finishing the month of July at 4.05 percent compared to 3.98 percent at the beginning of June. The massive sell-off in foreign and domestic stocks in recent days has caused mortgage rates to dip below 4 percent again, however. The yield on the 10-year US Treasury note (the benchmark that determines long-term mortgage rates) was nearly 2.3 percent at the beginning of August, and it recently dropped below 2 percent amid the global stock-market retreat. As investors flee the turbulence of the markets and seek out safer options, mortgage-backed bonds will attract increased attention. This is driving mortgage rates back down under 4 percent, where they may stay in the near term before reverting to the long-term trend of inching higher.

While we provided an analysis of the surge in building permits earlier this summer (the data has remained skewed due to the concentration of multi-family permits), the metric decreased significantly in July. New applications for building permits were at a SAAR of 1,119,000, which is 16 percent below the revised June rate of 1,337,000, but is 7.5 percent above the July 2014 estimate of 1,041,000.

Still, David Rosenberg, chief economist and strategist at Canadian investment firm Gluskin Sheff, stated that, “The US housing market is on fire and it is always nice when the macro data are in sync with market performance. The homebuilding data was solid again in July with the level of housing starts coming in stronger than anticipated."

Rosenberg also highlighted a few factors that are working in favor of the current housing market: rents continue to increase, and inventory levels are extremely tight. In our analysis of the housing market’s performance for 1H2015 last month, we covered this subject in detail noting that new construction of managed apartments has not kept up with demand; by the end of 2013, new apartments were available at an annual rate of 170,000 units, essentially matching the pace of growth in tenants. To make matters more difficult for the average American renter, the median rent for newly-constructed multi-family units in 2013 was $1,290, which is equivalent to half of the median renter’s monthly household income.

We also noted that single-family home starts could provide some palpable relief to the high rent trend, as homeownership seems like an obvious alternative solution for millions of Americans. New, “starter” home construction would ease the burden for many of these renters, and such homes would likely offer a higher quality of life for less cost on an annual basis, as well as the opportunity to invest and build equity in these properties.

Overall, the residential construction data for July is welcomed news for an economy that continues to operate in neutral. It may not be enough to level the erratic performance of global stock markets, but it is at least a bright spot amid the dim economic news of late.

Housing Market
US Housing Starts Reach13-year High in December
Talk about a well-timed (if late) Christmas gift for the US economy. Housing starts skyrocketed to a 13-year high in...
END_OF_DOCUMENT_TOKEN_TO_BE_REPLACED

Housing Market
November Housing Starts Jump for Second Month in a Row
The housing market is (slowly) gaining momentum, which is largely being driven by robust economic data in...
END_OF_DOCUMENT_TOKEN_TO_BE_REPLACED