While housing industry watchers haven’t yet given up hope for a late-season rally, the monthly metrics continue to disappoint and the window for a temporary surge is quickly closing. US housing starts dropped once again in July for the third straight month as homebuilding on multi-family housing units tanked, however, a jump in building permits to a seven-month high is keeping the dream alive… for now.

Privately-owned housing authorizations jumped 8.4 percent to a rate of 1.336 million units in July. Single-family authorizations were up 1.8 percent at a pace of 823,000 units. Privately-owned housing completions were up 7.2 percent to a SAAR of 1.250 million units. Per the US Census Bureau Report, seasonally-adjusted total housing starts by region included: 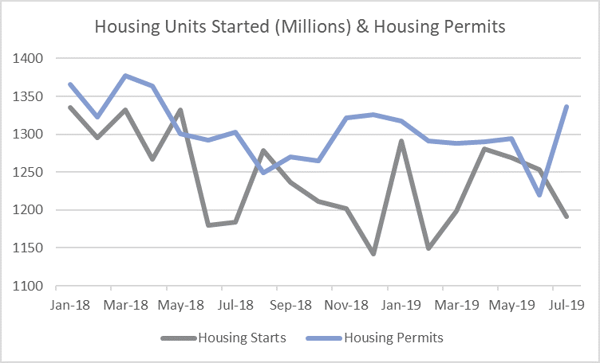 Home builder confidence inched up a single point in July to 65, per the National Association of Home Builders’ (NAHB) index. The 30-year fixed mortgage rate continued to decline in July, dropping to 3.60 percent for the month. The rate has now dropped 26 percent since peaking at 4.87 in November 2018.

A Reuters article published via CNBC noted that “Further [interest rate] declines are likely as the Federal Reserve is expected to cut interest rates gain next month amid growing risks to the economic outlook from trade tensions and slowing global growth, which contributed to an inversion of the U.S. Treasury yield curve and sparked recession fears.”

Every month, Forest2Market publishes updated forecasting products designed specifically for participants in the forest value chain. The Economic Outlook is a macroeconomic indicator forecast that supplies critical information, context and insight about general economic trends and direction. The commentary below is from the latest issue of the publication, which includes a detailed analysis of some of the demographic challenges facing the housing market in the coming decades.

Our monitoring of developments in July provides few indications that housing is poised to pull out of its current glide path—at least on a protracted basis—during the next two years. In fact, like the broader economy, risks seem over-weighted to the downside:

From 2008 through 2018, 4.4 million fewer US births occurred than the Census Bureau had projected in 2008. Each economic upturn prior to the Great Recession resulted in both a higher fertility rate and quantity of births, but the opposite has occurred during the current cycle. “Whatever policies are in place are not translating to economic and financial well being among the child bearing population,” wrote Christopher Hamilton, “and fertility and births reflect this.” 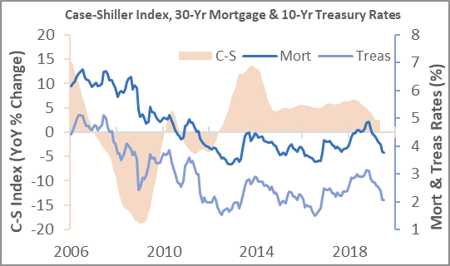 The key takeaway here is that fertility and births reflect economic and financial well-being; the lower rates since 2008 will not translate into a direct demographic impact on housing for perhaps several more decades. On the other hand, economic and financial conditions being experienced by the child-bearing demographic do directly impact their ability to purchase a home; hence, diminished fertility and birth rates suggest this demographic generally lacks the financial resources prior generations have had to fuel home purchase activity. Other data support this conclusion.

Based on Hamilton’s data sources (Center for Disease Control and United Nations) and analysis, growth in the prime home-buying demographic (20- to 64-year-olds) is slowing and, by 2021, is projected to be just 200,000 annually (Note: comparable US Census Bureau projections are nearly triple this level). Hamilton concluded “the next decade is one of essentially little to no growth among buyers while potential sellers (i.e., 65+year-olds) surge.”

Independent of the opposing conclusions one might draw because of data sources used, Hamilton’s dire forecast may be blunted somewhat by observations that residential construction has not kept pace with long-term historical population growth, and that a cumulative shortfall exists of perhaps 1 million to 4 million units.

Turning to less-speculative topics, although home price appreciation has slowed since March 2018—and more recently joined by declining mortgage rates—purchase prices remain out of reach for perhaps half of would-be buyers. “Home prices together have moved up the ladder, including the lower end that is now priced where mid-range used to be a few years ago,” wrote Wolf Richter, who added, “there is no more ‘low end’ in many markets, and the new low end has moved out of range for many buyers.”

While current mortgage rates have fallen back to 2012’s average, since June 2012 the median existing-home price has surged 52%; new-home price: +33%. “No one in the industry should be surprised that sales are slow,” Richter concluded; “high prices kill demand.”

Housing Market
US Housing Starts Reach13-year High in December
Talk about a well-timed (if late) Christmas gift for the US economy. Housing starts skyrocketed to a 13-year high in...
END_OF_DOCUMENT_TOKEN_TO_BE_REPLACED

Housing Market
November Housing Starts Jump for Second Month in a Row
The housing market is (slowly) gaining momentum, which is largely being driven by robust economic data in...
END_OF_DOCUMENT_TOKEN_TO_BE_REPLACED