Housing starts slowed in May despite consistently warm weather (ideal for building) throughout the US and a stock market that remains unexpectedly strong. Even though 1Q2016 corporate earnings reports were largely lackluster and the US dollar (USD) continues to lose strength globally, southern yellow pine (SYP) prices remain strong along with oil prices and the Dow Jones Industrial Average, which hovers around 17,850 as of this writing.

The gap in regional disparities broadened in May, as confirmed by the US Census Bureau report. The data out of the Northeast doesn’t tell the entire story, however, as single-unit starts increased by 12.7 percent in the region. "Single family builders are slowly, but surely, gaining ground on what has been a strong four years for multifamily construction," noted Ralph McLaughlin, chief economist at Trulia, an online marketplace serving the real estate industry. Seasonally-adjusted housing starts by region for May included:

The National Association of Home Builders’ (NAHB) sentiment index broke a four-month streak of unchanged readings by increasing two points to 60. “Builders in many markets across the nation are reporting higher traffic and more committed buyers at their job sites,” NAHB said in a press release. The 30-year fixed mortgage rate just barely inched downward from 3.61 to end May at 3.60. 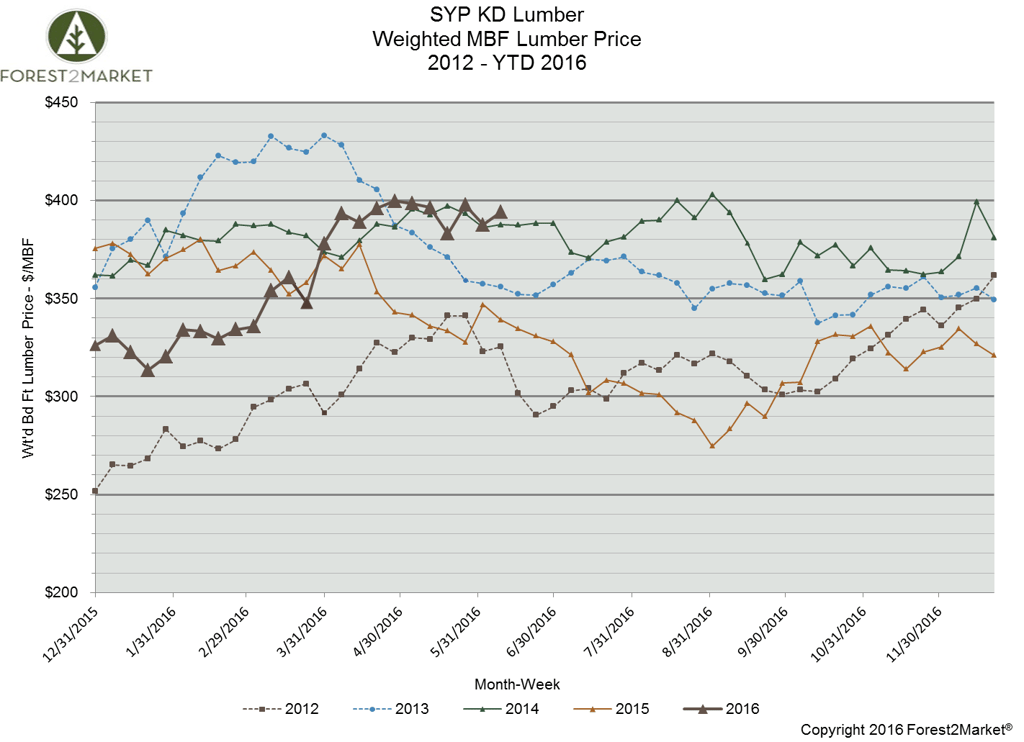 Last month, we reported on the strong data in the 1Q2016 Remodeling Index (RMI), which illustrated that the remodeling of existing homes remains a popular trend in all US regions. Along with housing starts, this trend has also helped to drive the price of SYP upward, particularly in the US South where SYP lumber is local and plentiful.

This month, fresh data from the NAHB highlights some segment concerns that are looming on the horizon. According to NAHB, lot availability recently hit a record low. Sixty-four percent of builders that responded to the May NAHB/Wells Fargo Housing Market Index reported that the supply of lots in their markets was “low” or “very low,” which is up from 62 percent last year. It also represents the highest that number has been since NAHB began collecting this data in 1997. 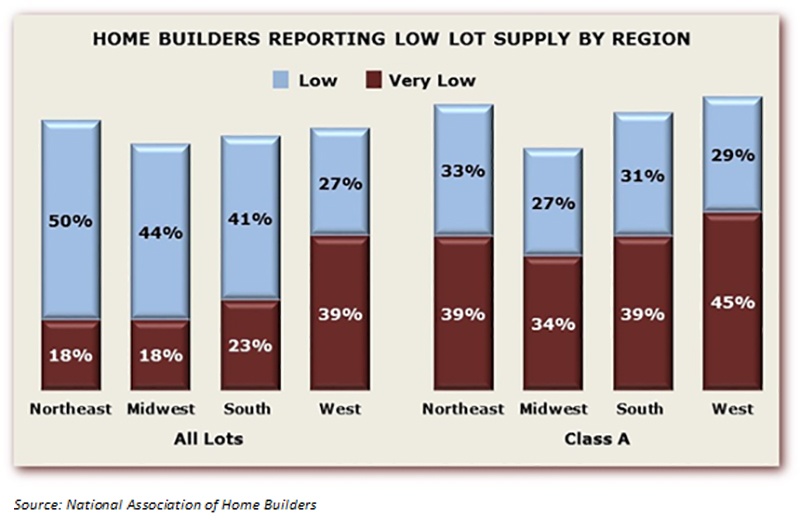 While the survey results varied somewhat based on region, builder size and lot type, the shortage of lots is most apparent in the Western US where 39 percent of builders said lot supply was “very low,” compared to 23 percent in the South and 18 percent in both the Midwest and Northeast. When referring to premium (Class A) category lots, builders in all regions reported similar opinions of shortages.

“We have monitored lot availability for the last two decades, and it is clear that the scarcity of building lots is growing,” said NAHB Chief Economist Robert Dietz. “Whether due to land use policy, geographic constraints or other regulatory constraints, the lack of lots for residential construction will have negative impacts on housing affordability in many markets.”

It is also worth noting that this record shortage of available lots comes at a time when new housing starts are at a SAAR of under 1.2 million a year. In 2005, when total housing starts were over 2 million, the share of builders reporting a shortage of lots was 53 percent.

While the housing market was (to some degree) the tipping point responsible for the 2008 economic meltdown and subsequent recession, it’s ironic that the sector has bounced back to become one of the lone bright spots in an otherwise anemic economy. Can housing maintain enough strength to carry us through the next big dip in the DJIA? “All along we expected this would be a pretty gradual recovery and that’s largely coming true,” said Scott Brown, chief economist at Raymond James Financial Inc., whose forecast for housing starts was among the closest in the Bloomberg survey. “We’re still very far from a boom period in housing at all here, but I think the fundamentals are still pretty good.”

Timber Prices
Where are Southern Timber Prices Headed?
The modern forest supply chain is without guidance for operating in the current pandemic-driven economic...
END_OF_DOCUMENT_TOKEN_TO_BE_REPLACED

Supply chain
Australia: Demand for New Housing & Lumber Collapses
In March 2020, before the COVID-19 pandemic gripped the global economy, there were 15,386 new dwellings approved in...
END_OF_DOCUMENT_TOKEN_TO_BE_REPLACED

Housing Market
March Housing Starts Freefall in Wake of Pandemic
Not surprisingly, US homebuilding dropped sharply in March as the COVID-19 pandemic continues to wreak havoc on...
END_OF_DOCUMENT_TOKEN_TO_BE_REPLACED