On the heels of March’s significant downtick (-8.8 percent), housing starts jumped in April despite signs of an economic slowdown, flagging corporate earnings reports and a US dollar (USD) that continues to lose strength globally.

Building permits also increased slightly in April; privately-owned housing unit permits were at a SAAR of 1,116,000, or 3.6 percent above the revised March rate of 1,077,000. Single-family authorizations were at a rate of 736,000, 1.5 percent above the revised March figure of 725,000. “The softness of permits signals a potentially sharp drop in May starts,” noted Ian Shepherdson, chief economist at Pantheon Macroeconomics. “But we remain hopeful that rising new home sales will lift activity through the summer and fall.”

Due in large part to the warmer weather, the gap in regional disparities began to close in April, as confirmed by the US Census Bureau report. The data has begun to equalize with the advent of a more temperate climate for building on a national level, and should continue to do so through the summer months. Seasonally-adjusted housing starts by region for April included:

The National Association of Home Builders’ (NAHB) sentiment index remained unchanged at 58 for the fourth month in a row (January was the first month since June, 2015 that it dipped below 60), and the 30-year fixed mortgage rate inched down from 3.69 to end April at 3.61.

The price of southern yellow pine lumber has surged since mid-1Q2016, and all indications look like it is poised to remain high in the near-term. SYP lumber finished week 20 at nearly $396/mbf, which is more than 21 percent above its January 2016 starting point of $326/mbf, and nearly 18 percent above its 2015 week 20 price of $336/mbf. 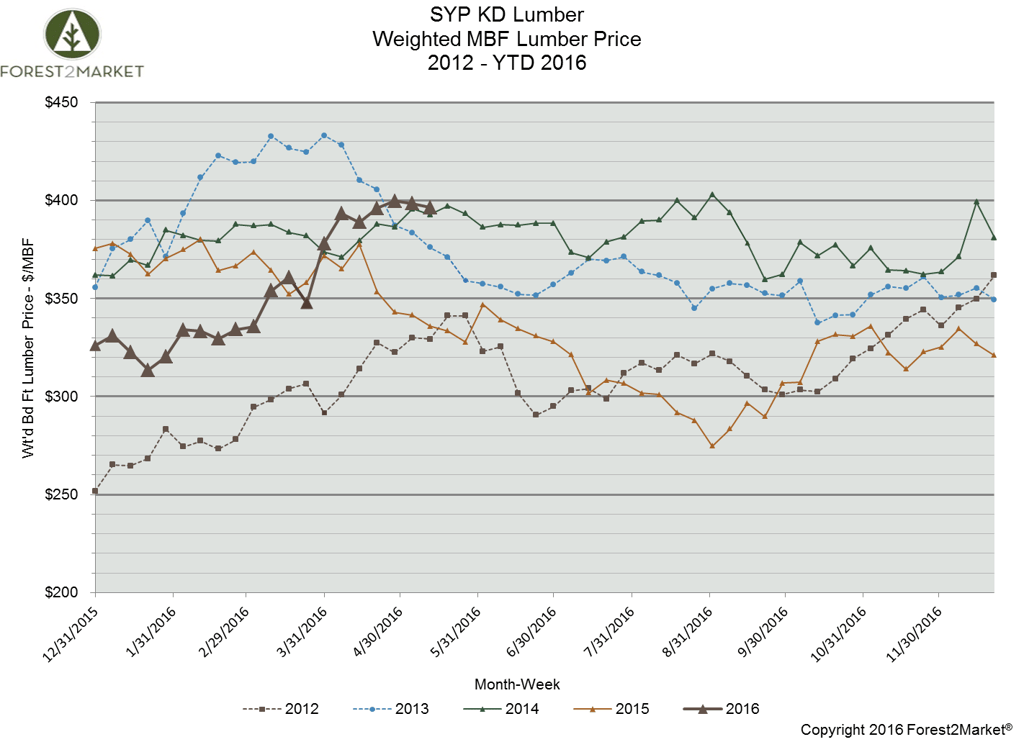 Note the trend line for 2016 in the chart above. SYP lumber prices are hovering around the $400/mbf mark, which is a price level that has only been eclipsed once (for more than two consecutive weeks) in the last five years. Housing starts remain steady on a YoY basis, but what other contributing factors are keeping prices at high levels not seen since 2013?

Remodeling existing homes remains a popular trend in all regions, but particularly in the US South where SYP lumber is local and plentiful. As noted in the Remodeling Index Chart (RMI) below, the index has remained at or above 50 (an RMI above 50 indicates that more remodelers report market activity is higher compared to the prior quarter) since 3Q2012, and the US South index very closely aligns with the national index. 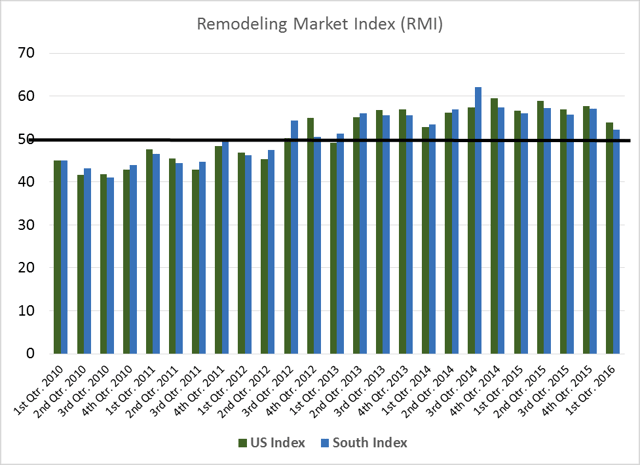 SYP is also one of the preferred species for manufacturing treated wood and many exterior projects—not limited to the US South—begin in the spring, often requiring the use of treated timbers. Inventory building at the retail level has been taking place during 1Q2016, and if economic conditions hold steady through the summer, the RMI should increase to reflect the growth in this sector.

National Association of Home Builders (NAHB) Chief Economist, Robert Dietz, noted that, “Minor declines in the small additions and maintenance categories coupled with a slight uptick in major additions resulted in a flat outcome for current market conditions. While the future market conditions of the index dipped slightly, we still anticipate modest growth in the remodeling industry over the course of 2016.”

While “flat” economic performance tends to be the new “up,” the housing sector is susceptible to taking a real beating—as it did in the Great Recession of 2008—should things deteriorate substantially yet again. As noted in the first paragraph, positive economic news is ever more elusive: Over the course of the last 30 days, the Bureau of Economic Analysis (BEA) pegged quarter-over-quarter (QoQ) growth of the US economy at a seasonally adjusted and annualized rate (SAAR) of +0.54 percent (versus expectations of +0.7 percent); the Dow Jones Industrial Index has declined over 570 points; and the USD weakened by 1.6 percent against a basket of 26 currencies on a trade-weighted index basis.

As the producer price index (PPI) edged down slightly in March, the not seasonally adjusted index for Lumber & Wood Products held at +0.3 percent for the month. We will see if the housing market can buoy a sluggish economy long enough to keep it afloat through the next several months and quarters.

Housing Market
May Housing Starts Plummet and Softwood Lumber Prices Follow
US homebuilding plummeted to a 13-month low in May, and prices for finished softwood lumber followed suit as the...
END_OF_DOCUMENT_TOKEN_TO_BE_REPLACED