If astonishing events come in “threes,” we can add the latest housing starts data to a recent list that includes the Chicago Cubs finally winning a World Series, and a real estate mogul winning the White House in what was arguably the biggest upset in US presidential election history. (At the very least, it was the biggest upset since 1948, which was an election cycle the establishment news media also got spectacularly wrong; The Chicago Daily Tribune’s headline infamously declared "Dewey Defeats Truman," despite Truman actually winning by over 2 million votes.) US housing starts surged to a nine-year high in October as growth in both single and multifamily homes continues to contribute to economic growth in 4Q2016.

The volatile multifamily segment soared 68.8 percent to a SAAR of 454,000 in October. Starts for buildings with five or more units hit their highest level since June 2015. Permits for future construction edged up 0.3 percent in October, and housing completions were up 5.5 percent above September’s estimate of 1,000,000 units.

Regional performance surged across the board in October, as confirmed by the US Census Bureau report. Seasonally-adjusted housing starts by region included:

“Homebuilding is in a steady recovery,” said Richard Moody, chief economist at Regions Financial Corp. in Birmingham, Alabama. “The fundamentals for demand are in good shape,” although “higher mortgage rates could be a potential headwind if we see further gains in rates.”

The 30-year fixed mortgage rate ticked up slightly in October from 3.46 to 3.47. This is 10.5 percent below the January 2016 rate, and is the third lowest point of the year. However, with investors anticipating faster expansion and inflation from President-elect Donald Trump’s policies, a coming rate hike is likely. A sustained rate surge could also discourage first-time purchases at a time when rising values are pricing buyers out of markets and inventories are low.

Per the recently-released RE/MAX National Housing Report, last month saw the second-most sales (and the smallest inventory) of any October in the 9-year history of the report. October also saw the highest year-over-year price increase of 2016 (thus far) at 8.3 percent. Although posting near-record sales, October 2016 finished 1 percent below October 2015 sales, which posted the highest of any October dating back to 2008. Sales declined year-over-year in 28 of the 53 markets surveyed, including many New England markets.

The number of homes for sale was the lowest of any month since May, and also the lowest of any October dating back to 2008. Inventory declined in 48 of the 53 markets surveyed, and inventory was unchanged at 3.9. Dave Liniger, RE/MAX CEO, Chairman of the Board and Co-Founder noted that, “Although October sales weren’t quite as robust as what we’ve tracked so far in 2016, it’s only the second month this year that didn’t exceed the strong levels set in 2015. But finishing just 1 percent below October 2015 sales is still a very solid performance. It’s the 13th consecutive month of double-digit decline in inventory year-over-year, and that appears to have pushed prices up in all but one market.” 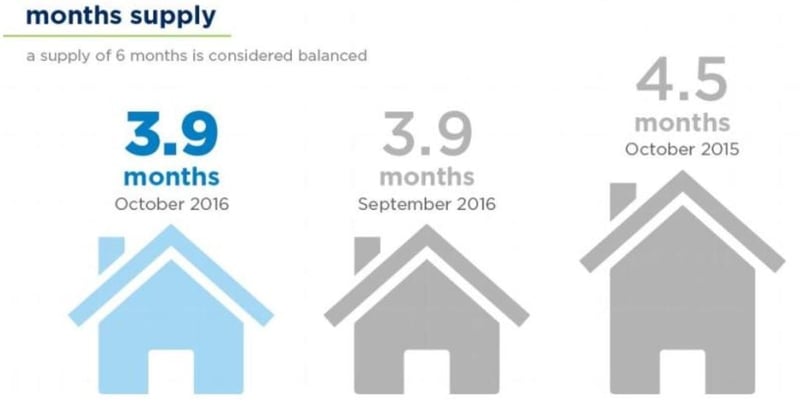 “While the October market rewarded sellers, their gains came at a cost,” said Nela Richardson, chief economist at real estate services firm Redfin. “With no new supply surge on the horizon, finding an affordable home will continue to be an unrelenting challenge for first-time buyers for the remainder of the year and into 2017. The good news is that mortgage rates continue to provide an affordability cushion, giving buyers a bit of wiggle room against budget constraints.”

Despite recent black swan events and the uncertainty that surround them moving forward, the housing market is poised to remain a bright spot in the US economy. Even amid the prospect of a coming rate hike, the larger housing market is maintaining a sustainable balance between supply and demand in an economic “recovery” that has been lethargic at best. Will a political shake-up refuel the growth engine? We’ll find out soon enough.

Housing Market
May Housing Starts Plummet and Softwood Lumber Prices Follow
US homebuilding plummeted to a 13-month low in May, and prices for finished softwood lumber followed suit as the...
END_OF_DOCUMENT_TOKEN_TO_BE_REPLACED

Housing Market
January Housing Starts Falter as High Prices Stress Market
US housing starts dropped more than expected in January as many parts of the country were exposed to prolonged cold...
END_OF_DOCUMENT_TOKEN_TO_BE_REPLACED