How Are Lumber Manufacturing Costs Changing the Industry?

The Beck Group estimates that more than $2.5 billion of capital investment is flowing into southern yellow pine (SYP) sawmills. While much of this capital is going toward new, greenfield sawmill operations, some is going toward significant upgrades at existing mills. One operating method that investors seek to maximize in their targeted financial returns is through increasing economies of scale, which leads to lower per-unit manufacturing costs.

With the expected increase in economy of scale, it would be easy to assume that the processing cost per unit of production would be dramatically lower for new sawmills and that this competitive advantage would be insurmountable for existing mills that aren’t upgrading their operations.  However, The Beck Group expects the reality to be more nuanced, with some existing mills maintaining their Top Quartile ranking along with new mills that will come online in the next few years.

A number of factors may affect the theoretical advantage of the new, large-scale mills, including the ongoing improvement and optimization of existing competitive mills, diminishing returns on recovery improvement, labor constraints, increasing labor costs and an apparent “law of diminishing returns” regarding sawmill economies of scale.

Staffing the new, larger mills alone will present challenges. With all of the newly-planned capacity increases, it is likely that southern yellow pine sawmills will face a challenge when it comes to labor supply, which is already constrained on an industry-wide basis. The Bureau of Labor Statistics (BLS) reports the civilian unemployment rate, as of June, 2018, at 4 percent. Having reached an 18-year low in 2018, the unemployment rate may not have even completely bottomed out yet. 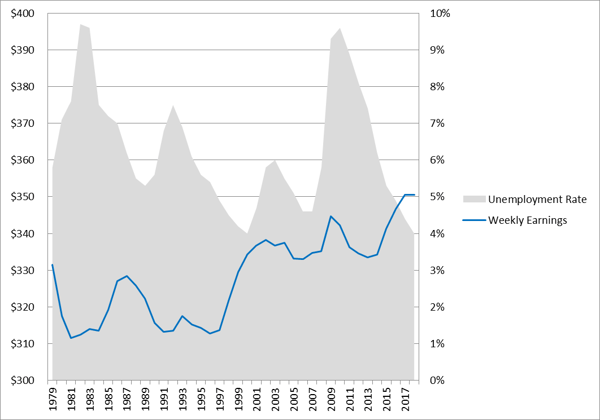 Many experts have pointed out that wages have not risen proportionately with the declining unemployment rate. This likely signals a future increase in wages, especially at newly-constructed mills that cannot rely on the loyalty of an existing workforce.

Additionally, new high-tech sawmills will require a higher percentage of skilled trade workers who will command higher wages. With many low-skilled jobs being replaced by automation, more sawmill workers will likely be millwrights, electricians, PLC programmers and sawfilers—all of which are highly-skilled and highly-paid positions.

In addition to providing benchmarking and consulting services at SYP lumber mills, The Beck Group has worked closely with lumber producers across other regions of North America. Through this work, we have observed manufacturing costs at mills of all sizes, including a number of very large sawmills in western Canada and the US. While we do see a strong (inverse) correlation between annual production volume and total cash manufacturing costs, we find that the largest mills (those with annual production levels in the range of 300-500 million board feet) have very competitive unit costs, but they are not substantially lower than other “large” mills (175-300 million board feet per year). Based on our research, increased scaling over a certain threshold does not provide a significant advantage in terms of the per-unit cost of lumber production.

Sawmill competition in the US South is rapidly increasing and even small changes to old paradigms will likely have significant impact to all participants in the supply chain. Since labor costs are likely to increase, southern yellow pine sawmills will need to operate with increasing efficiency to maintain a competitive unit processing cost that will land them among the ranks of the Top Quartile performers.

US forest industry
US Manufacturing, Forest Industry Slam on Brakes in April
US forest industry performance in March and April was recently reported by both the US government and the Institute...
END_OF_DOCUMENT_TOKEN_TO_BE_REPLACED

Lumber Prices
Are Skyrocketing Lumber Prices a Sign of Things to Come?
If we’ve learned one thing about economic uncertainty during the COVID-19 pandemic, it’s that markets will always...
END_OF_DOCUMENT_TOKEN_TO_BE_REPLACED