Per a new report and forecast from the International Energy Agency (IEA), bioenergy will experience the largest share of growth in renewable resources between 2018 - 2023, “underscoring its critical role in building a robust renewable portfolio and ensuring a more secure and sustainable energy system.”

Use of renewable sources of energy will continue to expand over the course of the next five years, making up 40% of global energy consumption growth, according to the IEA’s Renewables 2018 report. While growth in solar PV and wind technologies will continue in the electricity sector, bioenergy remains the largest single source of renewable energy because of its widespread use as a feedstock for electricity and heat, as well as transportation in the form of biofuels.

“Modern bioenergy is the overlooked giant of the renewable energy field,” said Dr. Fatih Birol, the IEA’s Executive Director. “Its share in the world’s total renewables consumption is about 50% today, in other words as much as hydro, wind, solar and all other renewables combined. We expect modern bioenergy will continue to lead the field, and has huge prospects for further growth. But the right policies and rigorous sustainability regulations will be essential to meet its full potential.”

Bioenergy is anticipated to grow by 37 GW over the next five years to reach 158 GW, however this growth is 10% lower than new capacity added from 2012-2017. Currently, China leads global growth in renewable energy and is poised to become the largest consumer of renewable energy by 2023, surpassing the European Union. The IEA forecast notes that a new policy initiative is expected to drive co-generation and energy-from-waste utilization in China. 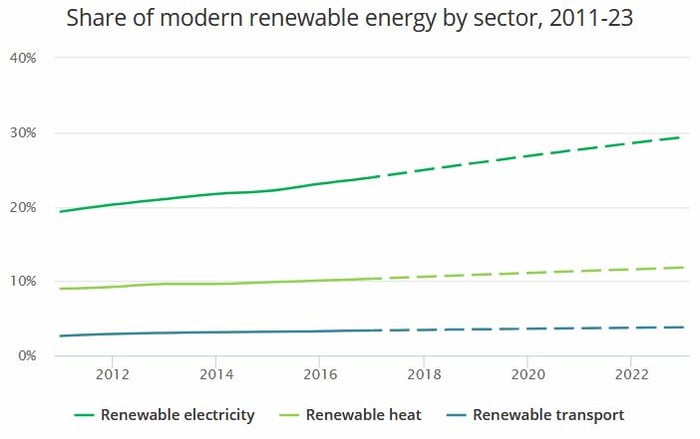 In the heating sector, the IEA report notes that modern bioenergy produced almost 70 percent of direct renewable heat in 2017 and currently meets 8 percent of industrial heat demand. The consumption of bioenergy by the industrial sector is expected to grow 13 percent over the next five years.

The transportation sector currently has the lowest penetration of renewables due to the complexity of deriving and scaling fuels from renewable resources at competitive prices. As we have noted in the past, the playing field is simply not even when it comes to globally competing with fossil energy sources. As such, the share of renewables in this sector is expected to grow from 3.4 percent in 2017 to just 3.8 percent in 2023. Of the renewable technologies used in transportation, biofuels are expected to account for nearly 90 percent, reaching 44 billion gallons by 2023. Of that total, fuel ethanol is expected to make up two-thirds of biofuel production growth, with biodiesel making up a majority of the remainder.

Solar PV currently dominates renewable electricity capacity expansion, accounting for more than two-thirds of global net electricity capacity growth in 2017. Solar PV capacity is forecast to expand by almost 600 GW—more than all other renewable power technologies combined, or twice as much as Japan’s total capacity—reaching 1 terawatt (TW) by the end of the forecast period. China is currently the leader in solar PV conversion, and the country will have nearly 40% of global installed PV capacity by 2023. The US remains the second-largest growth market for solar PV, followed by India.

The report notes that increased supportive governmental and policy measures will be integral for the expansion of renewables. “To meet long-term climate and other sustainability goals, renewable energy development in the heat, electricity and transport sectors must accelerate. Robust sustainability frameworks are key to bioenergy growth. Only bioenergy that reduces lifecycle GHG emissions while avoiding unacceptable social, environmental and economic impacts has a future role in decarbonising the energy system. Robust sustainability governance and enforcement must therefore be a central pillar of any bioenergy support policy.”

Bioenergy
Forest Service Announces Investments in Wood Energy and Innovation
The Guardian recently published a piece supporting the likelihood that the COVID-19 pandemic will have a drastic...
END_OF_DOCUMENT_TOKEN_TO_BE_REPLACED

Bioenergy
How is COVID-19 Impacting the Global Bioenergy Sector?
The COVID-19 pandemic may have temporarily changed the way a number of businesses interact with customers, but those...
END_OF_DOCUMENT_TOKEN_TO_BE_REPLACED