US housing starts dropped more than expected in January as many parts of the country were exposed to prolonged cold snaps that impacted building, as well as ongoing supply chain and price pressures. However, a monthly jump in permits suggests new homebuilding is poised to maintain pace in the coming (warmer) months; housing starts still remain above the historical average of 1.5 million units per month. 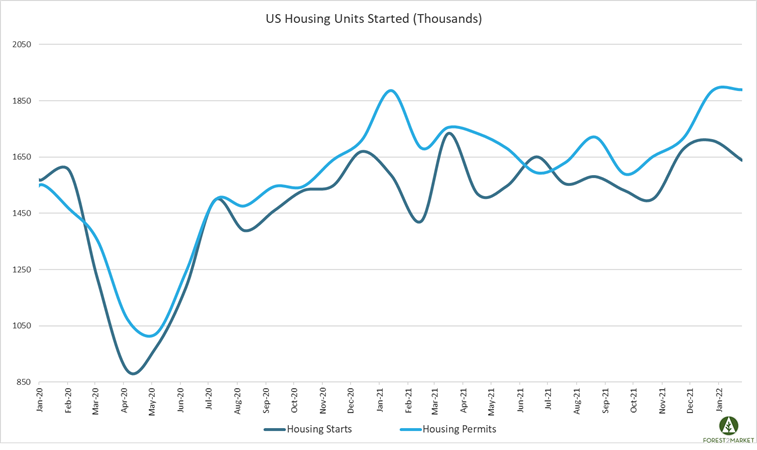 In December, the 30-year fixed mortgage rate jumped from 3.10 to 3.45 – the highest level in nearly two years – and the NAHB/Wells Fargo Housing Market Index (HMI) dropped by one point in mid-February to 82.

Looking more specifically at the single-family metric, after bottoming during the peak of the pandemic lockdowns in April 2020, single-family starts bounced back quickly before cresting in December. For most of 2021, this segment of the market trended downward amid high costs, supply chain strains and labor shortages. While single-family builds temporarily surged in November 2021, starts now appear to be succumbing to the same supply chain and cost pressures. 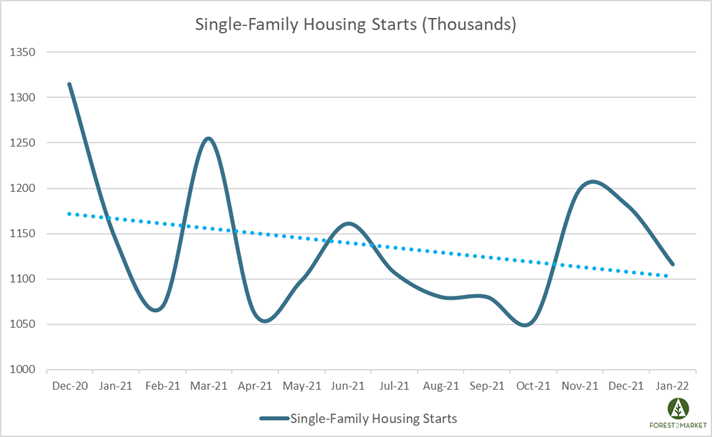 “While single-family starts dropped in January, the rise in permits, along with solid builder sentiment as measured in recent monthly surveys, suggest a positive start to the year given the recent rise in mortgage rates,” said NAHB chief economist Robert Dietz. “Fueled by higher mortgage rates and construction costs, declining housing affordability will continue to affect the home building market in 2022.”

Per fresh housing market insights published in our most recent issue of the Economic Outlook, homebuyers’ monthly mortgage bill will be significantly higher than it was a year ago. At current rates buyers can expect to pay $238 more per month on their mortgage (or nearly $3,000 per year) than they would have if they had bought property at this time in 2021. “This will hit first-time buyers especially hard, said Realtor.com’s George Ratiu, “and will shrink the budgets of what they can afford to buy—at a time when home prices continue to rise.”

“New home inventory is now more than three times higher, relative to sales, than inventory of existing homes, the biggest gap ever, by far,” observed Pantheon Macroeconomics’ Ian Shepherdson. “This position is likely to persist for several more months, at least, but homebuilders also will be closely watching how people respond to rising mortgage rates; a further surge in new home construction at this point looks risky to us.”

Zillow’s Jeff Tucker amplified on Shepherdson’s point when arguing that rising inflation/interest rates may support housing in the short run as buyers attempt to lock in the cost of their largest budget item; but demand will ultimately wane if wage increases fail to keep up with rising mortgage costs.

Housing Market
Housing Starts Plunge to Lowest Level in 19 Months
After jumping 12% in August due in part to strong demand from the multi-family construction sector, US housing starts...
END_OF_DOCUMENT_TOKEN_TO_BE_REPLACED

Lumber Prices
Southern Lumber Prices Continue to Inch Down
After jumping 12% in August due in large part to strong demand from the multi-family construction sector, US housing...
END_OF_DOCUMENT_TOKEN_TO_BE_REPLACED

Lumber Prices
SYP Lumber Prices Stabilize; Is More Volatility Around the Corner?
By late June, the price for finished southern yellow pine (SYP) lumber had tumbled 59% from its 2022 high mark of...
END_OF_DOCUMENT_TOKEN_TO_BE_REPLACED