At the beginning of 2017, Forest2Market began covering the Asian Biopower market, starting with our white paper, Demand for Biomass Pellets and Chips: Japan and South Korea. We followed that up with a series of seven blog posts evaluating the most likely sources of supply for these markets. We looked at the US South, the US Pacific Northwest, British Columbia, Brazil, Australia, Vietnam and Chile.

In this post, guest blogger Seth Walker from FutureMetrics takes a closer look at the Japanese biopower market, updating the Japanese policy piece of our white paper. He also looks specifically at the relative competitiveness of British Columbia and the US South to supply pellets to the Japanese market and suggests that much of the opportunity for the US South lies in "indirect opportunities to replace volumes from BC that are diverted to Japan instead of going to Europe." Ultimately, Walker concludes, "an unexpected rebound in European demand, plus replacing volume that had previously been going to Europe from British Columbia will likely contribute to a 'second wave' of pellet mill development in the US South."

Enjoy this in-depth look at emerging markets for wood pellets.

Over the last decade, European utilities have learned that displacing coal with sustainable wood pellets is one of the most efficient means of meeting renewable energy and carbon emissions reduction targets, leading to significant demand growth in global wood pellet markets. Now, their counterparts in Asia are learning the same thing.

Development of the US South Pellet Market

To meet their growing demand, European utilities looked across the Atlantic to one of the world’s largest fiber baskets, the US South. They facilitated the development of large-scale wood pellet export mills in the region by offering secure long-term contracts, or vertically integrating into the region (as is the case with Georgia Biomass and Drax Biomass International). Without the US South, large scale coal-to-biomass conversions like the United Kingdom’s (UK) Drax power station would have been impossible. Over the last ten years, United States wood pellet exports have increased from less than 200,000 tonnes in 2008 to over 5 million tonnes in 2017, a response to this growing demand (Figure 1). 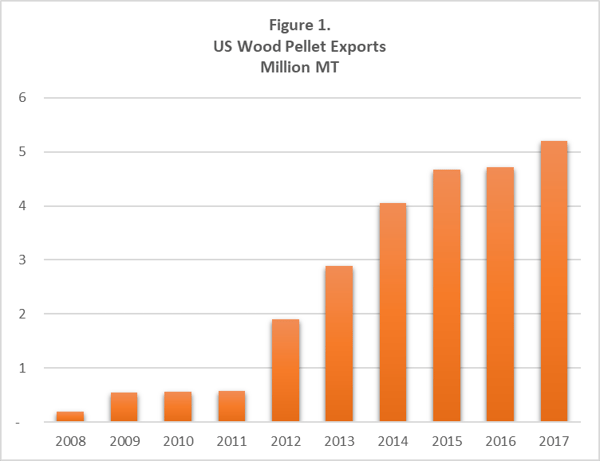 While US pellet exports have played a significant role in facilitating large-scale coal-to-biomass conversions and co-firing[1] projects in Europe, growth in the European industrial pellet market is decelerating as fewer coal units remain to be converted to wood pellets. As a result, US wood pellet exports to Europe are starting to slow after growing at a rapid 63 percent compound annual growth rate (CAGR) from 2011 to 2014; pellet export growth has slowed to 6.4 percent CAGR from 2014-2017.

FutureMetrics expects to see some more growth in European industrial markets over the next few years, as new conversions come on line in the UK and co-firing resumes in the Netherlands. However, growth in that market will likely plateau within the next five years. The opportunity for further development in industrial wood pellet exports lies with Asia.

Like the European countries that facilitated the first round of wood pellet development, Japan and Korea have some key characteristics that make them attractive markets for wood pellets. The UK, Belgium, Denmark, and the Netherlands, along with Japan and Korea are densely populated countries with relatively few domestic resources. These countries are net importers of energy and have a significant historical reliance on coal. In addition, all of these countries have support schemes for renewable energy that promote the use of biomass power generation.

From 2012 to 2017 wood pellet imports to Japan and Korea have increased from less than 200,000 tonnes to nearly 3 million tonnes (Figure 2). While Korea has accounted for the lion’s share of Asian pellet demand growth to date, the Japanese market offers more long-term promise for North American producers. This is due to the differences in the structure of subsidies between the two countries. 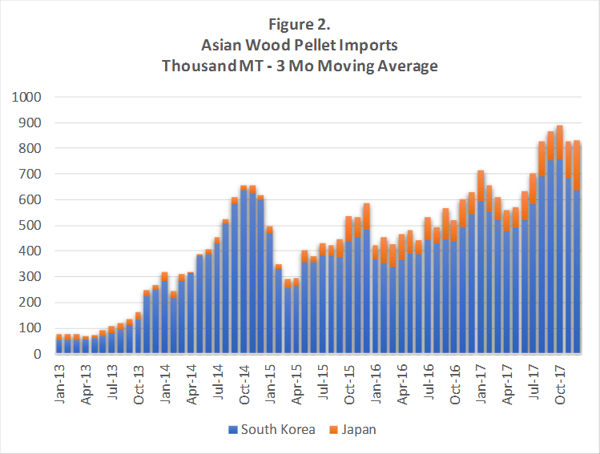 Korean markets are supported by the country’s renewable portfolio standard (RPS), which requires power companies to source an increasing percentage of their electricity from renewable sources. In order to demonstrate compliance with the RPS, power companies can either purchase or produce tradable renewable energy certificates (RECs), each representing 1 MWh of renewable generation. If an obligated company fails to procure the required number of RECs in a given year, they are fined a penalty equal to 150 percent of the average REC price for the year. The exchange-traded nature of RECs adds an additional layer of uncertainty in predicting the future value of the subsidy, which makes entering into a long-term contract for wood pellets difficult for Korean power companies. In addition, Korean utilities purchase fuel through a public tender system, wherein they must accept the lowest qualifying bids for fuel, further hindering their ability to enter into long-term agreements. As a result of the uncertain nature of the REC market and, because of the legal requirement to purchase fuel via public tender, the vast majority (nearly 90 percent in 2017) of wood pellets imported to Korea come from low-cost, low-quality operations in Southeast Asia—mainly Vietnam, but also Malaysia, Indonesia and Thailand.

In contrast to the uncertain nature of subsidies in Korea, renewable energy in Japan is promoted by the country’s Feed in Tariff (FiT) system which provides Independent Power Producers (IPPs) a set price for their electricity over an extended contract period. The FiT for larger (>2 MW) biomass power plants is a 20-year contract with prices ranging from 20 ¥/kWh ($0.18/kWh) for “general wood,” which includes imported wood pellets to 32 ¥/kWh ($0.28/kWh) for domestic unutilized biomass.

The subsidy has been quite successful, in fact, perhaps too much so. Japan’s Ministry of Economy Trade and Industry (METI) estimates that the FiT contracts it has issued for biomass would place a burden of 1.8 trillion yen ($16.2 billion) on electricity providers, and therefore ratepayers. Due to the overwhelming response, the FiT for “general wood” was already lowered in October 2017 from 24 ¥/kWh ($0.21/kWh), and will be changed yet again to an auction system in fiscal year 2018 (April 1). However, the dozens of projects that have already been awarded FiTs will be able to enjoy the higher rate at which they were certified.

Due to the nature of the FiT, with fixed-price 20-year contracts offered to biomass producers, Japanese buyers of wood pellets have both the ability, and the desire to enter into long-term offtake agreements. Actually, in order to secure financing for many of the planned biomass projects in Japan, developers will need to show that they have long-term supply contracts with reliable counter-parties who have a strong-track record. The only place where that criteria can be met is North America.

There are currently two major industrial wood pellet producing regions in North America: the US South and British Columbia. The two regions differ greatly in the way pellets are manufactured. In British Columbia, concentrations of some of the world’s largest sawmills provide the majority of the industry’s fiber furnish in the form of sawdust and shavings (pulp grade chips are too valuable for pellet manufacturing).

In the US South, however, the majority of fiber furnish comes from pulpwood roundwood from the region’s prolific pine plantations. For Southern US producers, this decision is both economic and practical. First, due to short harvest rotations and sophisticated supply and harvest networks, prices for roundwood pulpwood in the US South are some of the lowest and most stable in the world. Secondly, by having the ability to source directly from the forest, US producers are not dependent on another industry (sawmilling), should there be an economic decline or other shock that impacts lumber markets.

The first place that Japanese producers will look to source wood pellets is British Columbia. In fact, they already have. In 2017, 71 percent of Japanese wood pellet imports came from British Columbia and last summer, Sumitomo Corporation bought a 48 percent stake in Pacific Bioenergy,[2] the region’s second largest producer. British Columbia has high quality wood pellets available at competitive prices and frequently from certified forests (an increasing priority for Japanese buyers). British Columbia also has a notable shipping advantage to Japanese ports when compared to the US South. A bulk carrier from Vancouver to Japan travels about 4300 nautical miles over 14 days, approximately half the distance and time as a vessel from the US South to Japan (via the Panama Canal). There is, however, one glaring problem with increasing the amount of wood pellet production in British Columbia, a shrinking amount of raw material available due to the Mountain Pine Beetle (MPB) infestation.

Over the last two decades, a severe outbreak of the MPB has infested more than 16 million of the province’s 55 million hectares of forest.[3]  Though the spread of the MPB has slowed significantly, the impact will be felt for decades and the BC Ministry of Forestry estimates that nearly 55 percent of the province’s mature merchantable pine will be destroyed due to the infestation.  The vast majority (94 percent) of British Columbia’s forests are owned by the provincial government. Provincial authorities set Allowable Annual Cuts (AAC) and allocate various types of timber harvest and management licenses to the forest product industry. Because of the MPB infestation, the British Columbian AAC has been reduced by about 20 percent from historical norms. The AAC is not expected to recover to historical levels until 2080.[4]

While British Columbia is the biggest supplier to Japan, Japan is far from British Columbia’s biggest customer. The majority of British Columbian pellets currently end up in Europe after a journey of over 8,000 nautical miles through the Panama Canal. While it may seem logical for BC pellets to be sent to Japan, cutting the shipping distance in half and avoiding the fees associated with going through the Panama Canal, BC producers have committed to long-term contracts with many of their European buyers. In the short term, European traders will likely continue to look opportunistically to Japan and Korea to trade cargoes they have under long-term contract coming from British Columbia, so long as they can find replacement cargoes for less cost from Europe or the US South. Over the next several years, as contracts with European utilities expire, we expect more long-term contracts to be negotiated directly between BC producers and Japanese buyers.

The US South fiber basket is one of the largest and most productive in the world, and the region remains the most attractive to build a pellet mill. Unlike British Columbia, where fiber availability is a constraint, many US South fiber baskets can still support additional pellet capacity. Additionally, in conjunction with the US housing recovery, the US South is expected to see significant growth in lumber production, increasing the availability of both come-along pulpwood and mill residuals.

Several US producers are actively pursuing long-term agreements with Japanese buyers to build new mills. These producers argue that they can supply volumes at competitive prices, despite their shipping disadvantage, making up for it with economies of scale on both the production and shipping front. While some may be successful, we believe that in the short-term, the majority of US South production will continue to be contracted to Europe. However, an expected rebound in European demand, plus replacing volume that had previously been going to Europe from British Columbia will likely contribute to a “second wave” of pellet mill development in the US South.

Seth Walker is Senior Economist and Director of Business Development for FutureMetrics (www.futuremetrics.com), the leading consultancy in the wood pellet sector. FutureMetrics recently released its “Japan Biomass Outlook” study, which can be found here. If you have any questions or would like more information, Seth can be reached at sethwalker@futuremetrics.com or (617) 702-2418.

Timber Prices
Pulpwood Prices in Stressed Florida/Georgia Market Surge to Record Highs
In June 2020, we wrote a piece covering the sale of the shuttered Klausner Lumber One facility in Live Oak, FL in...
END_OF_DOCUMENT_TOKEN_TO_BE_REPLACED