Japanese Energy Firm Invests in Torrefied Biomass Manufactured in US

Asian power generators continue to migrate towards clean energy production in the region, which creates new supplier opportunities on a global level. Japan, in particular, has been shuttering nuclear facilities in the wake of the extensive damage caused by the Fukushima Daiichi nuclear disaster in March 2011. The Japanese government has approved nearly 3.2 GW of biomass-fired capacity and, while approximately 500+ MW are already commissioned, new opportunities await.

Toshiba Corp. recently announced the commercial operation of its first ever biomass power plant, a 50-MW facility that will supply enough electricity for 80,000 households and reduce CO2 emissions to 300,000 tons annually. The newly retrofitted Mikawa Power Plant will be managed by Sigma Power Ariake Corporation (a Toshiba subsidiary) and fueled with palm kernel shells (PKS).

A company based in Oregon is hoping to become another biomass supplier to Japan with its new torrefaction technology, and Japanese investors are also backing the project. HM3 Energy Inc. has constructed a demonstration facility in Troutdale where it converts forest slash and logging residues into biomass briquettes, and the company is aiming to license the technology and sell it globally.

Hiroshi Morihara, CEO of HM3 Energy, said that Japanese energy provider New Energy Development Company wants to use HM3 torrefied biomass to fire electrical power plants in Japan to replace coal-burning and nuclear-powered facilities. New Energy has invested $2 million in HM3, and plans to build a plant in Oregon for the production of torrefied biomass briquettes, which would then be exported to Japan.

Unlike traditional wood chips or wood pellets, HM3 uses a process called torrefaction in which they essentially roast wood debris in a controlled environment and temperature range. Other ventures in the PNW are also engaged in producing an improved biomass product using the torrefaction process, including the Oregon Torrefaction project. While producing chips and pellets for energy is a relatively simple process, torrefied biomass has special properties and requires a more complex manufacturing process.

The basis of the torrefaction process is to convert biomass into a high-grade solid biofuel. The process involves a thermo-chemical treatment of biomass between 200 - 300 degrees celsius (400 - 572 degrees fahrenheit). During this treatment, moisture and other volatile components are removed, and much of the hemi-cellulose is decomposed. The finished product is a lightweight, charred briquette (resembling coal) that can be pulverized and burned like coal, but much cleaner.

Torrefied biomass has significant advantages compared to other biomass fuels, namely the ability to be readily co-fired in existing pulverized coal power plants. The torrefaction process changes the biomass so that it is easily ground, has a higher energy density than raw biomass, and is resistant to moisture. These characteristics allow this form of biomass to perform similarly to coal in existing pulverized coal power plants. HM3 notes that, pound for pound, torrefied biomass offers the same energy as western coal and 30 percent more energy than raw wood pellets, as well as zero mercury or sulfur emissions and a 30 percent reduction in nitrous oxide emissions. 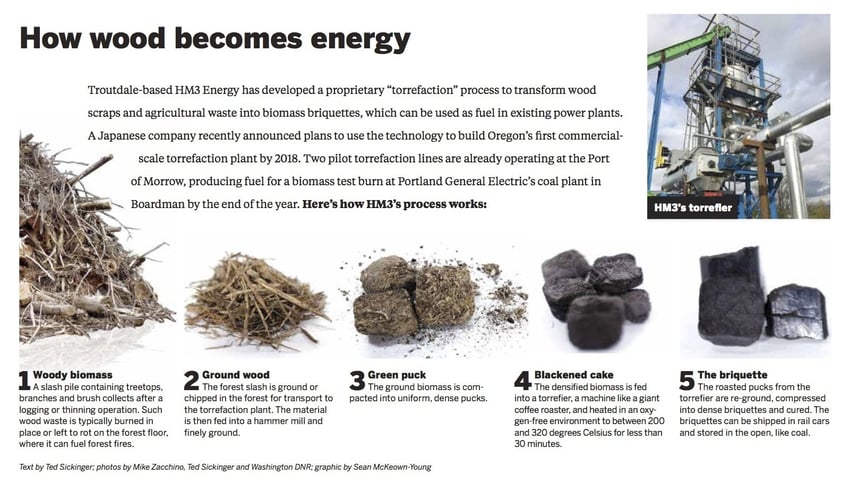 Portland General Electric (PGE) is interested in converting its coal-fired power plant in Boardman, Ore., to operate on biomass. A day of testing at the PGE plant using briquettes produced by Oregon Torrefaction has been delayed, but it will be considered a key experiment for the technology when it occurs.

Oregon BEST, a part of the state business department that provides funding and university research expertise for a variety of energy projects, estimates that Oregon, Washington and British Columbia could provide 35 million tons a year of biomass material to regional torrefaction plants. With ample raw material, existing supply chains and a bourgeoning Asian market, torrefied solid biofuel manufactured in the US could become a dependable, clean energy resource for Asian biopower consumers.

Bioenergy
Forest Service Announces Investments in Wood Energy and Innovation
The Guardian recently published a piece supporting the likelihood that the COVID-19 pandemic will have a drastic...
END_OF_DOCUMENT_TOKEN_TO_BE_REPLACED

Bioenergy
How is COVID-19 Impacting the Global Bioenergy Sector?
The COVID-19 pandemic may have temporarily changed the way a number of businesses interact with customers, but those...
END_OF_DOCUMENT_TOKEN_TO_BE_REPLACED