Mill inventory issues are nothing new in the Lake States. Forest2Market has been tracking fiber inventories and benchmarking prices in the Lake States for nearly three years. Over this time, the data shows that maintaining adequate system-wide inventories has been difficult across all species and products. As a result, price has increased significantly, making the Lake States the highest wood cost region in North America. The seasonality of wood supply in the region is the most significant factor mills take into consideration when planning for a consistent supply. While the specific inventory plan at each mill depends on a variety of other factors as well, the wood production system must not only generate a sufficient volume of supply, but the timing of the volume coming to market is also critical.

The graph below shows all pulpwood species combined and demonstrates clearly that inventory levels have steadily declined since October, 2012. The graph also clearly demonstrates that adequate logging force surge capacity exists to build winter inventory for spring breakup. It is also apparent, however, that this surge capacity has limitations. 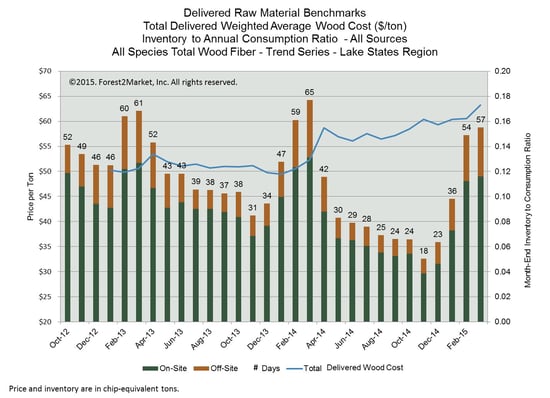 Drivers for this steady inventory decline include:

Since none of these situations are likely to change in the near future, mills in the Lake States will need to become more adept at managing their supply to avoid inventory level issues. By taking steps to optimize their supply chains, mills can minimize the effects of seasonality and bring supply and demand closer to equilibrium.

Log Markets
New Markets for Wood Products Help Preserve Forests for Future Generations
There is an ongoing disconnect that tends to resurface in the debate surrounding the use of woody biomass to create the...
END_OF_DOCUMENT_TOKEN_TO_BE_REPLACED

Timber Prices
US South Sawlog Supply is Likely to Tighten But Surplus of Small Logs and Residues Will Create Opportunities
The US South’s softwood industry has enormous potential for a variety of reasons. The region has a significant forest...
END_OF_DOCUMENT_TOKEN_TO_BE_REPLACED