Log Prices in the US South vs. the Pacific Northwest

In a recent blog post, we discussed the disconnect between log and lumber prices in the US South. While Southern yellow pine (SYP) lumber prices are at record highs, log prices in local markets are not reflecting the surging demand for lumber. In fact, sawtimber prices have remained flat to declining in certain markets throughout the southeast since the economic crisis of 2007. But the situation is very different in the Pacific Northwest (PNW), another timber-rich region of the US.

While a number of factors contribute to timber prices in a given region, the simple market principle of supply and demand is always fundamental. As we noted in the US South analysis, many regional mills were forced to adapt and improve efficiencies in the immediate aftermath of the great recession as demand all but dried up. As a result, many landowners simply pulled their timber off the market in hopes of driving prices higher in the future. This combination caused the total volume of logs on the stump throughout the US South to rise unimpeded and the resulting oversupply, combined with improved mill efficiencies, has kept log prices low even as demand for lumber has soared.

Demand for PNW lumber has also soared but unlike the US South, the PNW is resource constrained. Since the spotted-owl controversy of the mid-90s that severely limited access to timber, the region has undergone some drastic shifts; mill closures and consolidations have been the norm since that time as access to timber has become more difficult to secure.

Catastrophic wildfires and insect infestations have destroyed millions of acres of both public and private timberland in the region, which has also limited access to available timber. Per recent data from the US Forest Service, forest growth was 48 percent of mortality in western national forests, while timber harvests were a mere 11 percent of what is dying annually—and this trend is on the rise. The agency estimates that 6.3 billion dead trees were standing in 11 western states in 2015, up from 5.8 billion in 2010.

Additionally, the PNW has a robust export market for its logs, which places upward pressure on price and demand for an already strained resource. Landowners have access to export markets to the Pacific Rim, which can compete with domestic sawmills. The result has been sustained high prices; domestic and export Douglas fir prices have neared the $900/MBF mark in recent weeks. While Doug Fir exports continue a downward trend, they still comprise a significant volume for an already resource-constrained region; nearly 2.4 million cubic meters of Doug fir logs were exported in 2017.

It is also worth noting that the PNW’s dominant lumber market competitor, British Columbia (BC), has reduced lumber production and shipments in the past year due to a combination of factors. YTD production is down nearly 6 percent and shipments are down nearly 10 percent according to fresh data from Western Wood Products Association. BC’s supply continues to dwindle; a loss of 25 million cubic meters in the mid-term supply, and 12 million cubic meters of previously-available insect killed dead pine was recently reported, as well as recent significant losses from wildfires and problems with rail and truck transportation.

Though residents of the PNW are surrounded by dense stands of timber, most of the publicly-owned timber is off-limits to harvesting operations.  As a result, the lumber industry in the region is primarily supplied by logs from private lands. Only 37 percent of timberland in the region is privately-owned; the remainder, 63 percent, is under public ownership—primarily via the USFS, which produces very little timber. However, the majority of private forest land in the PNW is certified to one of a variety of certification programs that assure harvest levels are sustainable over time, thereby limiting the ability to significantly increase production.

In contrast, timberland in the US South is almost entirely privately owned, with less than 13 percent of its land under public ownership. These private landowners are better able to service their local markets, as they are free to harvest and sell timber at their discretion. 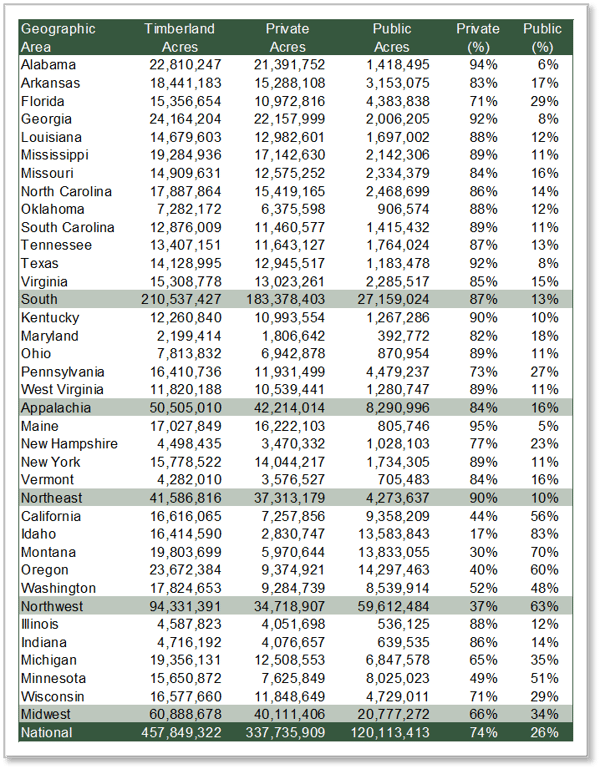 When current lumber price and demand are factored in, the PNW market will simply not sustain significantly higher log prices; the prolonged pressure must be released at some point. The most obvious “release valve” is the export market. As some of the export volume continues to diminish due to sustained record high domestic prices, it will open up more opportunity for regional wood fiber to flow back to the domestic market. In the near term, however, private landowners in the PNW will continue to actively harvest their timber and capitalize on high log prices, and timber supply in the PNW will continue to be an issue.

Timber Prices
Where are Southern Timber Prices Headed?
The modern forest supply chain is without guidance for operating in the current pandemic-driven economic...
END_OF_DOCUMENT_TOKEN_TO_BE_REPLACED

US forest industry
Strategic Planning During Downturns with Precise Market Data
It’s difficult to overstate the uniqueness of the current global health (and economic) crisis we find ourselves in....
END_OF_DOCUMENT_TOKEN_TO_BE_REPLACED