Despite Expiration of the SLA, Lumber Prices and Housing Starts Increase

The anticipation of a Federal Reserve rate hike earlier this month had global market analysts teetering on the edge of their seats. They breathed a collective sigh of relief after the Fed announced it would not being raising interest rates at this time, and the volatile market continues its march into uncertainty. Housing starts are still one of the few bright spots for the US economy as soft global demand, a strong dollar and weak exports continue to hinder economic growth; housing starts for September were positive. Interestingly, lumber prices also continue to climb despite the expiration of the Softwood Lumber Agreement (SLA), confirming that housing is indeed on the rise.

Single-family construction continues to be sluggish; after posting a decline last month, this segment showed a moderate gain of just 0.3 percent above the revised August figure of 738,000. Most of September’s growth came in the form of multi-family housing, which surged over 18 percent to its highest level since June.

Single-family inventories remain tight, and rising rent prices are driving more potential buyers to the market. As we have noted before, a surge in single-family starts could do a lot to alleviate some of the associated costs of rising rents. “Builders are stepping up to meet that demand but doing so cautiously,” noted Stephen Stanley, chief economist at Amherst Pierpont Securities. “So, for beleaguered buyers who can’t find what they are looking for because of a dearth of listings, there is a bit of help on the way.”

The 30-year fixed mortgage rate in September ticked down slightly to 3.89 from August’s 3.91. Home builder confidence was up two points over last month to a level of 64, which is the highest it has been since 2005.

The SLA and Lumber Prices

The October 12 expiration date of the 2006 Softwood Lumber Agreement (SLA) has come and gone, but the expiration has not brought industry trade or lumber sales to a grinding halt. On the contrary, Forest2Market’s SYP KD weighted lumber price jumped to over $328/MBF in mid-October, representing a 13 percent increase in just four weeks and indicating that demand still exists. 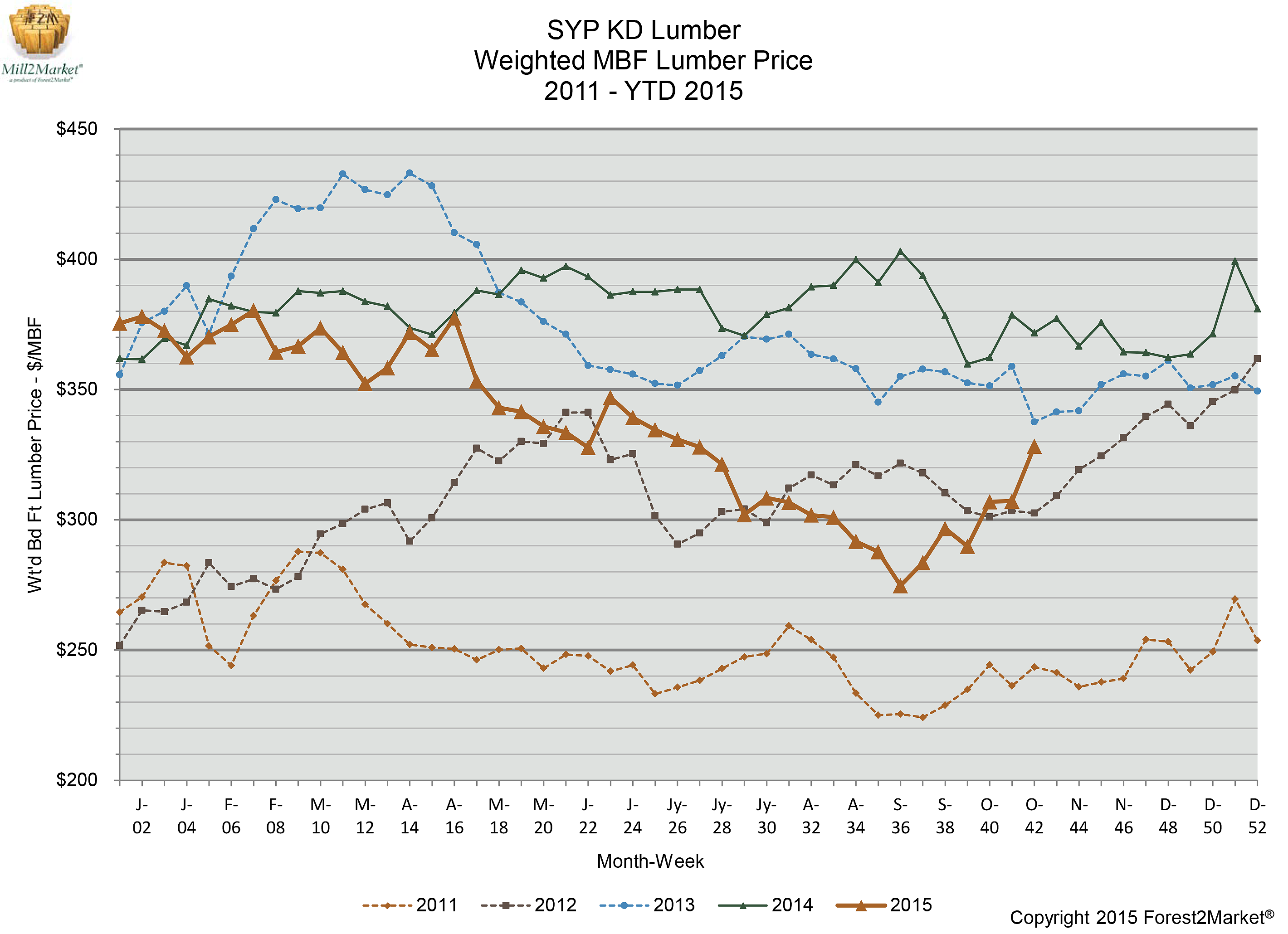 As we noted in our coverage of the SLA earlier this year, the origins of the initial trade dispute and the subsequent creation of the Agreement are complex. The 2013 renewal of the SLA signaled that the market had reached at least some point of equilibrium, but markets change quickly. Canadian and US lumber producers will now enter into an idle, one-year period during which both countries are prohibited from taking unilateral action and free trade prevails.

Also in the earlier coverage, we noted some of the significant changes that have impacted the North American lumber trade since the creation of the agreement. Taking that analysis a step further, consider some of the changes that have affected the British Columbia and US markets in particular:

Analysts have been anticipating a surge in cheap(er) Canadian lumber imports since October 12, but it has not yet happened. Demand remains strong and lumber prices reflect this despite the one-year idle period and the decent housing data as noted above. Even still, Canadian imports are lower than they were in 2006; its market share has dropped from 33 percent to 27 percent.

In the near-term, the pervasive sense of uncertainly seems to be driving the lack of any meaningful economic growth, and such uncertainty will continue to affect housing numbers, the SLA and, by extension, lumber pricing. There are simply too many market dynamics and trade variables at work to make any confident projections at this point. That said, housing starts and lumber prices continue to provide some relief, as well as hope, for an ailing economy.

Lumber Prices
Softwood Lumber Prices Tumble 40%; Is Another Rally on the Horizon?
The volatile North American softwood lumber market continues to keep us all guessing as we enter mid-2Q2022. After...
END_OF_DOCUMENT_TOKEN_TO_BE_REPLACED

Log Markets
How Do Lumber Producers Determine Log Value?
The red-hot softwood lumber market has garnered a lot of attention over the last two years. Inquiring minds from Main...
END_OF_DOCUMENT_TOKEN_TO_BE_REPLACED