Lumber Prices
Author: Mike Fiery
Spring build season had a significant impact on southern pine lumber with price reaching as high as $433 per MBF during March and April 2013.  After the spring surge, composite price declined 17% and leveled off in the month of June. In July, composite price gained back some of the lost ground, reaching $380 per MBF in the first week of August. During the remainder of August, however, it has dropped back to near June levels.

This weakening in price is a result of the mixed messages being sent by the housing market (see figure below). Housing start numbers, for instance, drove prices higher in the final four months of 2012, and when the numbers remained respectable throughout the first quarter of 2013, lumber prices continued to climb. In April, the number of starts dropped precipitously (back to October/November 2012 levels), and lumber prices peaked. Since the number of starts has been up and down throughout the summer, prices have been up and down as well. 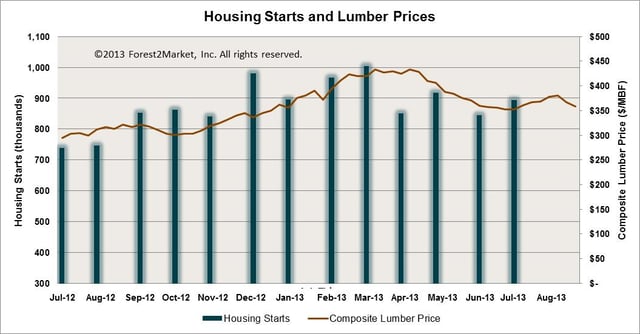 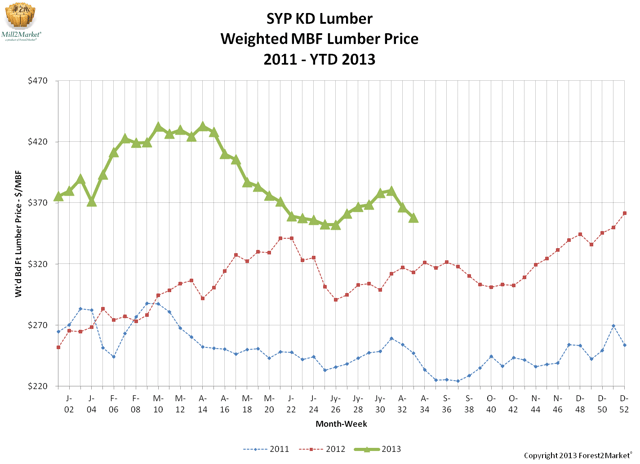 The above figure summarizes pricing data gathered for Forest2Market’s weekly lumber market report, Mill2Market.  For this market report, Forest2Market aggregates sales order data submitted directly by report subscribers. This figure charts weekly sales order prices from January 2011 through the year to date 2013 and compares sales orders data, FOB Mill on a volume weighted $/MBF basis. The prices in the figure are composite prices; they include all kiln dried dimension lumber, timbers and boards.

Lumber Prices
SYP Lumber Prices Deflate in 2019; What’s in Store for 2020?
2019 is now in the books and after 12 months of moderate volatility, southern yellow pine lumber prices finished the...
END_OF_DOCUMENT_TOKEN_TO_BE_REPLACED