After two months of lackluster performance, US housing starts bounced back in March to a 15-year high, which was fueled by a breakneck building pace in the Midwest where total housing starts were up nearly 123 percent month-over-month (MoM). However, skyrocketing materials prices and rising interest rates could limit upside potential for builders in the near term as homeownership becomes increasingly unaffordable across popular markets.

Privately-owned housing starts surged 19.4 percent in March to a seasonally adjusted annual rate (SAAR) of 1.739 million units. Single-family starts increased 15.3 percent to a rate of 1.238 million units; starts for the volatile multi-family segment rocketed 30.8 percent to a pace of 501,000 units.

"While housing demand is expected to remain strong, we expect it to diminish somewhat as the year progresses," said Doug Duncan, chief economist at Fannie Mae in Washington. "Homebuilders continue to face supply constraints, including increasing prices of lumber and other materials." 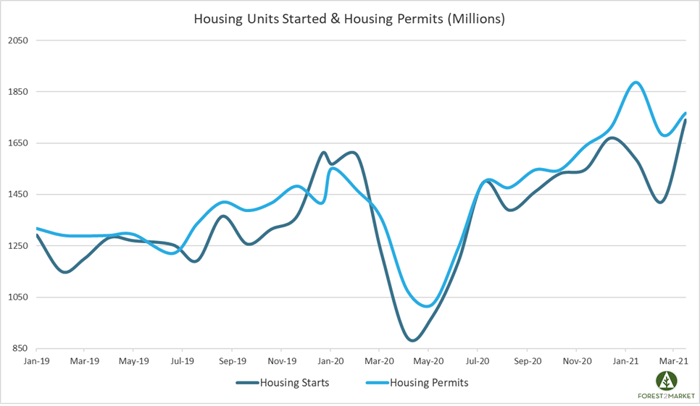 The 30-year fixed mortgage rate jumped in March from 2.81 to 3.08, and speculation is that rates are likely to increase in the coming months. The NAHB/Wells Fargo Housing Market Index (HMI) ticked up one point to 83 in mid-April.

Fresh housing market insights published in our most recent issue of the Economic Outlook: Despite present headwinds, the factors that had driven gains in home building during 2H2020 remain in place for now. Mortgage rates are still historically low (but rising), and the transition to remote working—which prompted many people to consider buying larger homes in the wake of the pandemic—is likely to only partially reverse as the economy continues to reopen.

Also, years of under-building following the Great Recession mean the US housing market now has a supply shortage (around 900,000 single-family units), particularly on the existing-home front. Because existing-home prices are rising at the fastest YoY pace since 2014, first-time home buyers are now increasingly considering purchasing newly-built homes given the lack of other options.

“We’re just chronically under supplied after the global financial crisis,” said Angel Oak Capital Advisors’ Sam Dunlap, adding that the supply picture could take years to fix. “The one way we can solve this problem is to continue to build more single family units in the U.S. to meet the ever increasing demand.”

The Biden administration is proposing that the federal government “build, preserve, and retrofit more than two million homes and commercial buildings.” Although doing so could, if passed into legislation, lend support to the forest products sector, that support would mask legitimate price discovery of building products and occur at the expense of the private sector. In fact, the private sector would face a double whammy as the government is able to pay above-market prices for items it procures after first taxing the required funding from the private sector.

Perhaps proving economist and free-market champion Milton Friedman’s adage that “nothing is so permanent as a temporary government program,” the Consumer Financial Protection Bureau is considering extending the ban on foreclosures until 2022. Originally initiated with a two-month duration in March 2020, the program has subsequently been repeatedly expanded and extended. Certainly, no one wants to see homeowners foreclosed upon; however, allowing them to continue “digging themselves deeper in the hole” means their situation will be even more dire if/when the program is finally terminated.

“Single-family home building is forecasted to expand in 2021, but at a slower rate as housing affordability is challenged by higher mortgage rates and rising construction costs,” said NAHB’s Robert Dietz. Labor availability and the speed at which innovation in construction techniques are adopted for residential construction (e.g., cross-laminated timber) are other factors that could influence housing’s trajectory. Most important, however, are fundamentally favorable demographics with the arrival of the Millennial home-owning cohort. Having been delayed by the Great Recession, the cohort’s emergence will buttress gradually increasing housing starts on a trend-line basis over the next 24 months.

Lumber Prices
SYP Lumber Prices Stabilize; Is More Volatility Around the Corner?
By late June, the price for finished southern yellow pine (SYP) lumber had tumbled 59% from its 2022 high mark of...
END_OF_DOCUMENT_TOKEN_TO_BE_REPLACED

Housing Market
Housing Starts Tumble to Lowest Level in 17 Months
After a disappointing May and June, US housing starts continued to lose momentum in July as the housing market cools...
END_OF_DOCUMENT_TOKEN_TO_BE_REPLACED

Housing Market
Lower Housing Starts, Higher Home Prices, and Surging Inflation
After a disappointing May (-14%), US home building continued to inch down in June as the housing market cools amid...
END_OF_DOCUMENT_TOKEN_TO_BE_REPLACED