May Housing Starts Disappoint; Is the Market Losing Momentum?

After tumbling over 10 percent in April (monthly data was revised down to a rate of 1.517 million units from the previously reported 1.569 million units), US homebuilding bounced back in May driven by a shortage of existing and available homes for sale. However, new construction continues to be hamstrung by expensive building materials, supply chain bottlenecks and labor shortages. 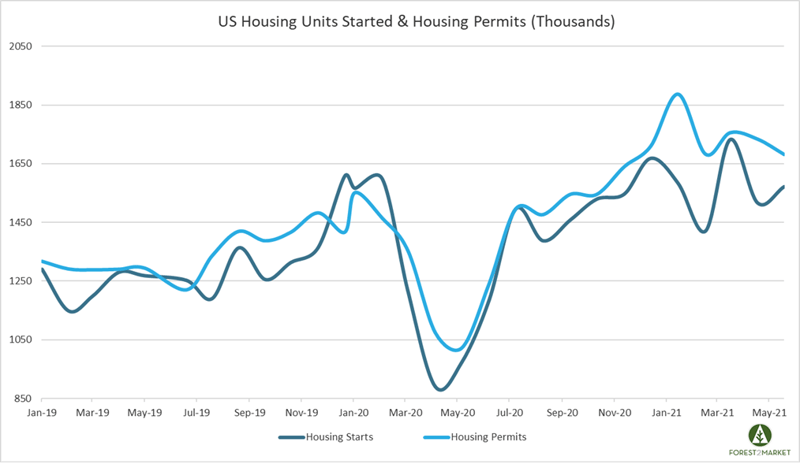 The 30-year fixed mortgage rate ticked down in May from 3.06 to 2.96, and the NAHB/Wells Fargo Housing Market Index (HMI) inched down from 83 last month to 81 in mid-June.

According to fresh housing market insights published in our most recent issue of the Economic Outlook, builders are expressing growing concerns over the price and availability of most building materials, including lumber. “Policymakers must take note and find ways to increase production of domestic building materials, including lumber and steel, and suspend tariffs on imports of construction materials,” argued NAHB’s Chuck Fowke. That appeal seems to be falling on deaf ears, as—despite expressing a campaign-trail opinion that former President Trump “bungled” trade policy by imposing tariffs—President Biden intends to more than double tariffs on Canadian softwood lumber from 8.99 percent to an average of 18.32 percent.

Based upon the observation that multifamily permits have staged a strong recovery (+34.6 percent since October 2020) while single-family permits have declined 7.8 percent on trend since December, housing analyst Robert Hughes speculated that “some of the rush to less dense housing that drove single-family activity in 2020 is starting to ease” as the economy continues reopening. We suspect soaring home prices also help explain the uptick in multifamily permits.

The median new-home price in April ($372,400) was back to within 0.2 percent of January 2021’s record high, whereas the median resale price hit a new record of $341,600. I.e., since “first-time and first-generation home buyers are particularly at risk for losing a purchase due to cost hikes associated with increasingly scarce material availability,” enough of them may have decided to give up on buying for now and keep renting—and that expanding demand from new household formations is showing up in multifamily permits.

Lawrence Yun, chief economist for the National Association of Realtors (NAR), said the nation’s housing shortage goes beyond month-over-month data. “America is facing a massive housing shortage due to multiple years of underproduction in relation to population growth. Expect both rents and home prices to outpace overall consumer price inflation in the upcoming years.”

The NAR recently released a report by the Rosen Consulting Group, which called the dearth of available homes “dire” and urged action at the policy level. "A severe lack of new construction and prolonged underinvestment [have led] to an acute shortage of available housing… to the detriment of the health of the public and the economy. The scale of underbuilding and the existing demand-supply gap is enormous… and will require a major national commitment to build more housing of all types," the report reads.

The good news for the NAR is this: Millennial demographics will establish a floor for housing during the foreseeable future. In addition, the pandemic’s legacy impact on housing will be an increase in remote working. There is a counterbalance to these factors, however, including the transition of the Baby Boomer cohort out of their current residences into other living situations, but that effect will likely not be significant until later in this decade.

Lumber Prices
WRI Market Insights: Global Softwood Lumber Markets
Global trade of softwood lumber fell about 10% in the first half of 2022 compared to the same period in 2021. Most of...
END_OF_DOCUMENT_TOKEN_TO_BE_REPLACED

Housing Market
Housing Starts Plunge to Lowest Level in 19 Months
After jumping 12% in August due in part to strong demand from the multi-family construction sector, US housing starts...
END_OF_DOCUMENT_TOKEN_TO_BE_REPLACED

Lumber Prices
Southern Lumber Prices Continue to Inch Down
After jumping 12% in August due in large part to strong demand from the multi-family construction sector, US housing...
END_OF_DOCUMENT_TOKEN_TO_BE_REPLACED