New Hampshire Biomass Gets a Temporary Lifeline, But What’s Next?

Biomass markets in New England are having a tough time surviving. Low wholesale power prices, combined with flagging incentives for renewable biomass from states in Southern New England, have left biomass plants throughout the region struggling to continue operations.

As markets for low-grade wood—both pulpwood and biomass—have declined in the Northeast, remaining low-grade markets have become increasingly important. Since 1999, the Northeast has lost 11 pulp mills and since 2014, roughly 4 million tons of market has been lost.

This year, it was New Hampshire’s turn. The state has six “legacy” biomass plants—all under 20 megawatts in capacity—that were built decades ago. It also has a Seacoast facility that was converted from coal a decade ago, and a new plant at the site of a closed pulp mill in the North Country. These plants represent increasingly important markets for loggers and landowners in the state and region. 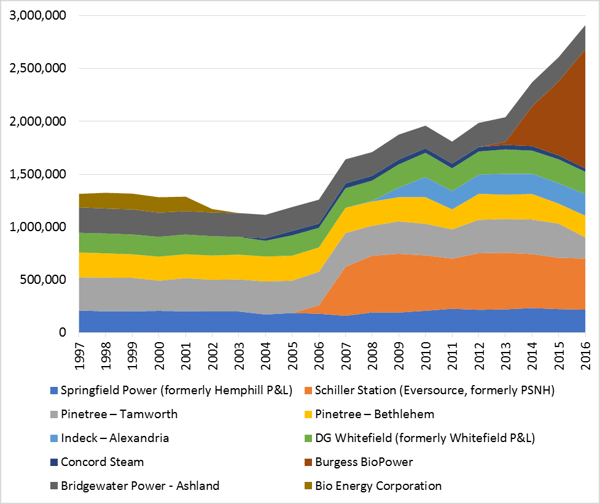 Recognizing the challenging economics that biomass plants face in today’s energy market, the New Hampshire legislature modified the state’s Renewable Portfolio Standard (RPS), a law that establishes required levels of renewable energy purchases by state utilities. While complex, a modified RPS is expected to raise the price of Renewable Energy Certificates for the state’s six legacy biomass plants, which is essentially the “renewable” part of renewable energy. In July, New Hampshire Governor Chris Sununu allowed the legislation to become law without his signature.

The new law will impact the market for three years in 2017, 2018 and 2019. It is expected that most of the six legacy plants (one plant, owned by Indeck Energy in Alexandria, is currently idle) will be able to use this additional support to continue operations for a few years.

But what happens in 2020? Wholesale electricity markets are expected to stay low, as plentiful and inexpensive natural gas will continue to be the primary fuel used to generate electricity in the region. Policy supports from the large markets in Southern New England—notably Massachusetts and Connecticut—are gone or shrinking. The economics of selling biomass power in New England doesn’t look like it will improve over the next few years.

It’s not just New Hampshire’s six legacy plants—and the 1.3 million tons of market they represent—that face this challenge. The state’s largest utility, Eversource (formerly PSNH), is in the process of selling all of its power generating assets, including a 10-year old 50 MW biomass plant in Portsmouth. The terms of sale require that the plant maintain operations for 18 months, but there are no guarantees thereafter. Similarly, a new (first operations in 2013) biomass plant in Berlin on the site of a closed pulp mill also faces economic challenges. The facility has a Power Purchase Agreement (PPA) that runs for 20 years, but a clause that caps above-market costs at $100 million. Given the unforeseen drop in natural gas prices, this cap could be reached as early as 2019, in effect ending a 20-year PPA after only 6 years.

Given these events, all of New Hampshire’s biomass market—totaling nearly 3 million tons—will be in jeopardy just a few years from now. While the legislation just enacted provides a welcome and needed reprieve, the industry has just a few short years to explore new business models to remain economically viable. Achieving a sustainable model, and retaining the critical markets these plants provide, will require creative thinking not only from leadership at the biomass plants, but also from suppliers and policy-makers, all of whom have a stake in maintaining this market.

Bioenergy
Batteries Made with Renewable Wood Could Help Alleviate Energy Pressures
When we think of innovative battery technologies and some of the scalable, successful products that have been developed...
END_OF_DOCUMENT_TOKEN_TO_BE_REPLACED