US housing starts rose more than initially forecast to a nine-month high in November, highlighting the strength of a housing market that’s being led by gains in single-family residential construction. Single-family starts have now increased for seven straight months as housing remains hot due to pent-up demand and historically low mortgage rates.

Privately-owned housing starts were up 1.2 percent in November to a seasonally adjusted annual rate (SAAR) of 1.547 million units. Single-family starts increased 0.4 percent to a rate of 1.186 million units; starts for the volatile multi-family segment jumped 4.0 percent to a pace of 361,000 units. 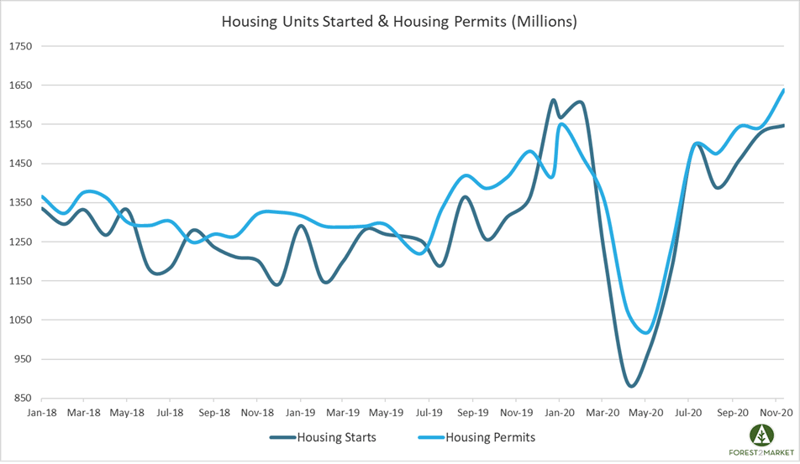 The 30-year fixed mortgage rate dipped in July from 2.83 to 2.77, the lowest level on record. The NAHB/Wells Fargo Housing Market Index (HMI) ended a string of three consecutive months of record highs and fell by four points to 86 in December.

“Builder confidence fell back from historic levels in December, as housing remains a bright spot for a recovering economy,” said NAHB Chief Economist Robert Dietz. “The issues that have limited housing supply in recent years, including land and material availability and a persistent skilled labor shortage, will continue to place upward pressure on construction costs. As the economy improves with the deployment of a COVID-19 vaccine, interest rates will increase in 2021, further challenging housing affordability in the face of strong demand for single-family homes.”

Per housing market insights published in our most recent issue of the Economic Outlook, demand for single-family housing has increased so rapidly in recent months—fueled by low interest rates and a desire for more space—that there is now a gap between sales and home construction not seen since the housing bust. Inventory for sale is on par with, or at, all-time lows in months-of-current-sales terms (new homes: 3.3 months; resales: 2.5 months).

Coming months could see a moderation in activity, however, at least in resales. October pending home sales decreased by 1.1 percent, the second decrease in as many months. Most analysts attribute the pullback to rising prices from scarce inventory and low interest rates, combined with tightening credit standards.

That combination has resulted in homebuyers being required to make the biggest down payments in at least two decades. The median down payment for single-family homes and condos was $20,775 in 3Q, up 69 percent from $12,325 a year earlier. Borrowers paid 6.6 percent of the median sale price of homes financed in the quarter, up from 4.7 percent a year earlier and the highest level since 2018. The median 3Q loan amount of $275,500 was the highest since 2000, up 24 percent YoY. “Down payments are rising at a time when lenders are tightening their guidelines,” said ATTOM Data Solutions’ Todd Teta. “Lenders have grown more cautious in order to protect themselves from more delinquencies.”

Doug Duncan, chief economist at Fannie Mae echoed a similar sentiment: “While housing construction has helped drive the economic recovery to date, we believe the rapid rebound phase has likely passed. November’s single-family starts pace was a little stronger than we had expected, but the comparatively modest increase of only 0.4% over the month (compared with over 7% the prior two months) is consistent with our view that the starts pace will soon level off and even pull back somewhat.”

Lumber Prices
SYP Lumber Prices Stabilize; Is More Volatility Around the Corner?
By late June, the price for finished southern yellow pine (SYP) lumber had tumbled 59% from its 2022 high mark of...
END_OF_DOCUMENT_TOKEN_TO_BE_REPLACED

Housing Market
Housing Starts Tumble to Lowest Level in 17 Months
After a disappointing May and June, US housing starts continued to lose momentum in July as the housing market cools...
END_OF_DOCUMENT_TOKEN_TO_BE_REPLACED

Housing Market
Lower Housing Starts, Higher Home Prices, and Surging Inflation
After a disappointing May (-14%), US home building continued to inch down in June as the housing market cools amid...
END_OF_DOCUMENT_TOKEN_TO_BE_REPLACED