New Study Quantifies the Economic Impact of Private, Working Forests in the US

Forest2Market has completed a new study commissioned by the National Alliance of Forest Owners (NAFO) that analyzes the economic impact of private, working forests on the US economy. The study and resulting published report, titled The Economic Impact of Privately-Owned Forests in the 32 Major Forested States, quantifies the contribution that forestry-related industries make to state, regional and national economies, and analyzes the most forested regions of the country based on the most recent year of data available, which is 2016.

The following map identifies the regions that were the subject of the study. 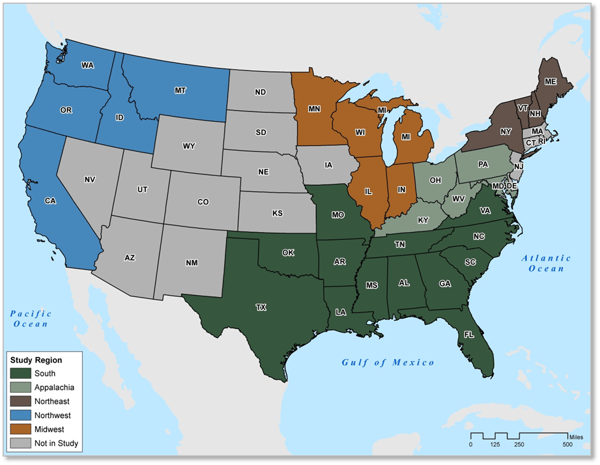 Of the 455.9 million acres of timberland within the 32-state study area, 335.5 million acres (74%) are privately-owned while only 120.4 million acres (26%) are publicly-owned. This translates into a much stronger economic impact associated with private timberlands.

US forest industry
CPI & Forest Products Sector PPI Continue to Expand
US forest industry performance in February and March was recently reported by both the US government and the Institute...
END_OF_DOCUMENT_TOKEN_TO_BE_REPLACED