Biomass fuel is an important market for New Hampshire’s forest industry and, despite recent victories in the state legislature, six legacy biomass plants now face a new challenge that threatens their ability to continue operations.

The Granite State is home to eight total biomass plants, six of which are older plants that were developed decades ago in response to policy incentives. These plants provide a vital market for low-grade wood. In 2016, the most recent year for which New Hampshire has full harvest data, wood for all products (sawlogs, pulpwood, firewood and biomass) totaled 3.3 million tons. 1.3 million tons—or 41% of the total—was biomass. Biomass has supplanted pulpwood as the single largest market for low-grade wood in NH, as in-state pulp mills have closed and two new biomass plants have opened. 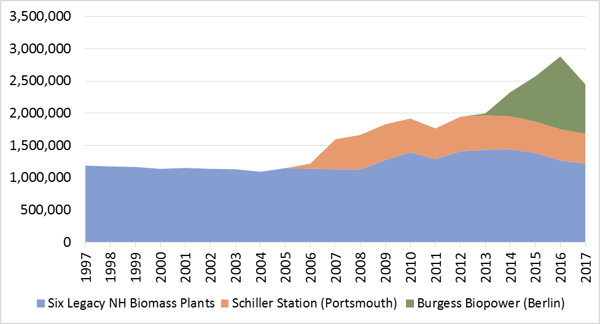 While they comprise an important market for the state, New Hampshire’s smaller biomass plants have a hard time operating in the highly competitive wholesale energy market. In 2008, the average price for wholesale electricity in New England was $80.56 per MWh; in 2017 it dropped to $33.94 per MWh (up from $28.94 per MWh in 2016). Decreased natural gas prices coupled with increased efficiency at homes and businesses has been great for forest industries that purchase electricity, but it also threatens the continued operations of some biomass plants.

The New Hampshire legislature stepped into this fray in early 2018 and passed a bill providing for three years of above-market contracts for electricity from the state’s six legacy biomass plants (five of which are operating). This bill to provide short-term financial support for the biomass plants recognizes the important role these markets play in the state’s forest industry and forest management, and is intended to allow them time to develop new business plans in hopes of continued operations. (A task that is easier said than done, but probably not impossible for some facilities).

Citing the increased cost to electricity customers from this bill, Governor Chris Sununu vetoed the legislation, setting up a contentious and high-profile effort to override the veto and continue the biomass market at these legacy plants. (Interestingly, the Governor did not veto a bill that extended support to a newer biomass plant in Berlin, NH.)  The New Hampshire Timberland Owners Association, the state’s forest industry trade association, led a summer-long grassroots effort to override the veto. In September, the 400-member NH House overrode the governor’s veto by just one vote, apparently securing the near-term future for these biomass markets.

But the nail-biting win for biomass may turn out to be too good to be true. In mid-November, the New England Ratepayers’ Association filed a challenge with the Federal Energy Regulatory Commission (FERC) arguing that federal law doesn’t allow states to set electricity rates, and that New Hampshire’s support for biomass effectively does just that. Other parties need to respond to FERC by early December, and anything is possible thereafter.

Just when New Hampshire’s loggers, truckers and forest industry thought they had three more years of a critical market for low-grade wood, the future is now uncertain. How this issue will be resolved is still up in the air, but whatever decision is made will be of enormous importance to forest industry in the Granite State for years to come.

Forest Management
What Forest Carbon Pool Types Store the Most Carbon in the US?
Forest2Market’s newest analytical tool – Carbon Analysis 360 – was specifically designed to help participants across...
END_OF_DOCUMENT_TOKEN_TO_BE_REPLACED

Forest Management
Who Are the True Conservationists?
Gifford Pinchot, the first Chief of the U.S. Forest Service, described conservation as the “wise use of the earth and...
END_OF_DOCUMENT_TOKEN_TO_BE_REPLACED