First quarter results from Market2Mill are in, and they show that US domestic OCC prices and order volumes increased while price volatility decreased (volatility is represented on the chart by the black whiskers on the blue line).

The longer trend line shows a fairly typical recovered fiber wave-like trend, which moves higher and lower as domestic and export players jockey for pricing power.  While first quarter 2013 results show a relatively stable market, however, a recent implementation by the Chinese government of a “green curtain” may soon lead to an OCC price correction. 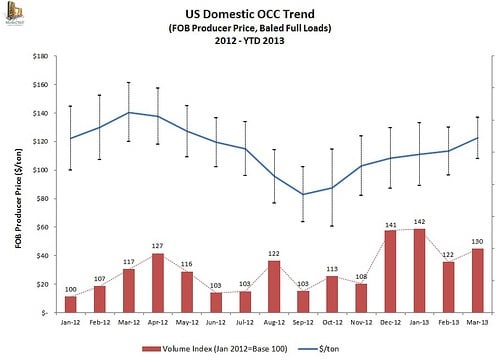 Toward the end of February, the recycling community began to hear rumblings of China implementing a “green curtain” as Chinese inspectors began to crack down on higher contaminant levels in shipments and institute stricter inspections practices.  Eventually, the rumor became a reality as shipments were reportedly rejected at the port and returned to the country of origin.

According to Market2Mill, export prices were off nearly 5 percent in February primarily due to decrease purchasing during Chinese New Year celebrations.  With the end of the holiday in China and a difficult winter throughout most of North America, prices began to rebound in March, gaining 6.5 percent.  During April, the Chinese green curtain affected most shippers, and an increasing number of shipments were turned away. Shippers became more hesitant to ship overseas as a result.  This dynamic will clearly play into the hands of the domestic mills. We could easily see OCC prices—across the board—fall $10 to $20 per ton going into May, as suppliers will be more likely to accept lower prices in order to reduce inventory that would normally be on its way to China.

The drop will almost certainly be temporary, though, as China will eventually exhaust its inventory—generally 60-80 days—soon. When their current supply is gone, Chinese paper companies will put pressure on the government to ease up on the requirements. Since the tougher restrictions began at the end of February, primarily affecting March and April shipments, we would look for importing restrictions to be eased sometime in mid-June.

If the Chinese government holds firm on its import restrictions, exporters in the US may be forced to change strategies. While companies are not prepared to change their practices when prices are relatively stable, a dramatic drop in price may make them more inclined to improve sort for quality instead of speed, either by slowing down lines or instituting additional sort methods. While these slowdowns must be managed to control the level of inventory on the floor, finding a balance between quality and speed will remain a sticking point for suppliers. Single stream collection is becoming more widely adopted in the US, affecting the collection and processing of most of the grades currently in demand by Chinese mills.  Ultimate resolution may require a meeting of the minds by both sides of the table; the current “contaminant problem” is not likely to improve without some proactive strategy from suppliers and a compromise by the Chinese government.

We expect the wave-like price trends in recovered fiber prices to repeat themselves.  Chinese buyers stage a protest once or twice a year, either over contaminant levels or high prices. They pull back from the market, allowing domestic mills to build inventory. Once they have sufficient inventory, domestic buyers pull back from the market, thereby loosening supply and driving prices lower. Then either because prices are lower or because they have run out of inventory, Chinese buyers jump back in the market, and the competition between domestic and export buyers leads to a tighter supply, which pushes prices higher once again. In this way, the stop-and-go dynamic of export markets dictate what happens in the US market.  As a result, the wavy trend line in prices is likely to continue for the balance of the year.

A Closer Look at First Quarter 2013 OCC Price and Trends, from Market2Mill

Prices have also been less volatile this quarter. The variation in price in first quarter 2013 was $17.88, 21.8 percent lower than volatility in fourth quarter 2012, when volatility was at its highest and the spread was $22.87.