US housing starts jumped in October, once again led by strong gains in single-family home construction. The trend continues to suggest that residential building has some momentum left as we head into the final leg of what has been the most turbulent year in recent history. “The pace of single-family starts in October was the highest production rate since the spring of 2007,” wrote NAHB chief economist Robert Dietz.

Privately-owned housing starts were up 4.9 percent in October to a seasonally adjusted annual rate (SAAR) of 1.530 million units (1.460 million units were expected). Single-family starts increased 6.4 percent to a rate of 1.179 million units; starts for the volatile multi-family housing segment remained flat at a pace of 351,000 units. 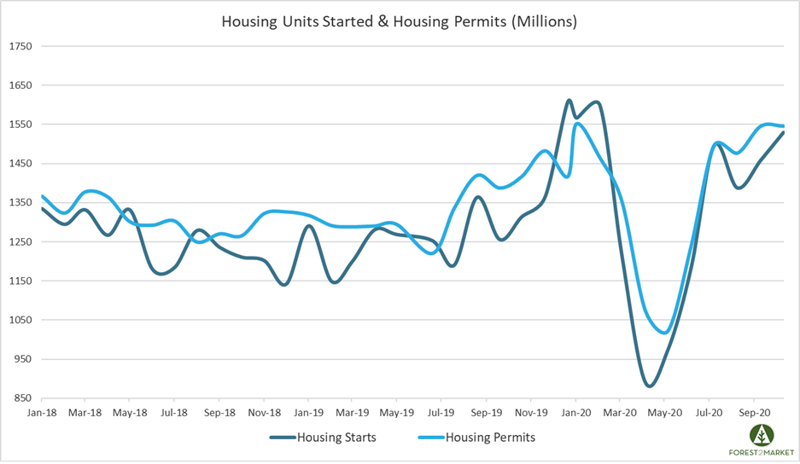 The 30-year fixed mortgage rate dipped in July from 2.89 to 2.83, the lowest level on record. The NAHB/Wells Fargo Housing Market Index (HMI) jumped from 85 to 90 in November, which marks the highest level in the history of the indicator.

Robert Dietz added that housing starts increased “to meet strong buyer traffic, supported by low interest rates, a changing geography of demand, and a growing number of sales that have not started construction.”

Per housing market insights published in our most recent issue of the Economic Outlook, demand for single-family housing has increased so rapidly in recent months—fueled by low interest rates and a desire for more space—that there is now a gap between sales and home construction not seen since the housing bust. Census Bureau estimates and NAHB surveys indicate builders are selling a greater number of homes that have not begun construction. September sales of such homes were up 49 percent YoY. 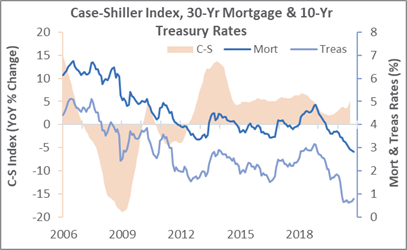 Available inventory remains tight on a months-of-sales basis: New-home inventory (3.6 months in September) has been lower only four times (the first time was in November 1998), whereas resales (2.7 months) were at a record low going back to January 1999.

Analyst Stephen McBride used many of the above-cited statistics to argue the US housing market remains in the “early innings” of a boom. “The ‘08 housing bust turned off a lot of ordinary Americans from investing in housing,” he wrote. “And it shattered the confidence of homebuilders, too. Scarred by the housing bust, homebuilders have been sitting on their hands for the past decade.” During the decade 2010-2019, builders erected 993,000 homes per year, significantly below the long-term pre-2000 annual average of 1.5 million units. The result is “a serious housing shortage.”

McBride also appealed to demographics to contend that the boom has room to run. As we have frequently mentioned in past reports, the Millennial cohort is more numerous than the Baby Boomer generation. Millennials got a slower start on homeownership because of college debt, and graduating “into a job market that had been decimated by the 2008 financial crisis,” but they are gradually becoming more active in the housing sphere; in fact National Association of Realtors data indicate Millennials’ share of mortgages recently surpassed 50 percent for the first time.

Looking forward, “every year for the next decade, tens of millions of millennials will hit home-buying age,” McBride predicted. “In other words, a whole generation of homebuyers will soon flood the market. At a time when there is a massive shortage of homes in America.”

While agreeing in broad terms with McBride’s thesis, we caution that some setbacks are almost inevitable along the way. For example, unless a policy fix can be crafted in the meantime, a wave of evictions threatens to wash ashore in January. At that point, an estimated $32 billion in moratorium-paused back rent will come due, with up to 8 million tenants facing eviction filings—more than double the 3.6 million evictions in a typical year.

This situation has no easy solution: If the eviction moratorium is lifted, millions could be thrown into the street; if the moratorium is extended, landlords could be bankrupted; if the moratorium is lifted but Congress provides financial assistance to renters, the federal debt will increase—stifling growth and leading to more long-term economic hardship. With a nontrivial probability of more lockdowns being imposed in coming months, housing, employment and the broader economy could be further impacted in adverse ways.

Lumber Prices
SYP Lumber Prices Stabilize; Is More Volatility Around the Corner?
By late June, the price for finished southern yellow pine (SYP) lumber had tumbled 59% from its 2022 high mark of...
END_OF_DOCUMENT_TOKEN_TO_BE_REPLACED

Housing Market
Housing Starts Tumble to Lowest Level in 17 Months
After a disappointing May and June, US housing starts continued to lose momentum in July as the housing market cools...
END_OF_DOCUMENT_TOKEN_TO_BE_REPLACED

Housing Market
Lower Housing Starts, Higher Home Prices, and Surging Inflation
After a disappointing May (-14%), US home building continued to inch down in June as the housing market cools amid...
END_OF_DOCUMENT_TOKEN_TO_BE_REPLACED