Beginning in 4Q2017, prices for domestic and export Douglas fir logs in the Pacific Northwest (PNW) rose steadily before they spiked in 2Q2018 to record levels. As I wrote in 4Q2018, log and lumber prices in the PNW began to drop precipitously by September of last year as lumber market speculation subsequently waned. We’re now halfway through 1Q2019 and the trend shows no signs of slowing, but how low can prices go?

In December 2018, the weighted average price for delivered domestic Doug fir logs was $701/MBF, which was 16% lower than a year earlier. Export prices followed a similar path to domestic prices throughout 2018, however notice the trend reversal in the chart below for December. In that month, export prices diverged significantly from the downward slide of domestic prices and jumped nearly $30/MBF, or roughly 4%. 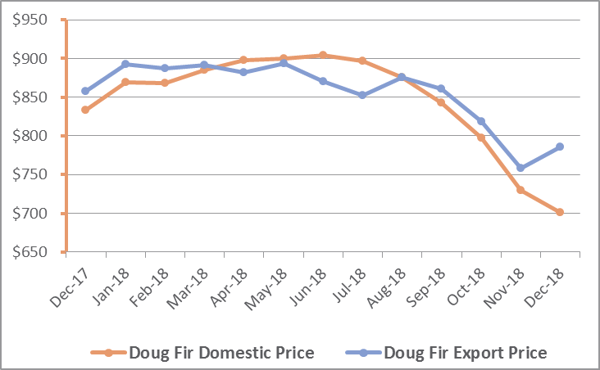 In December 2018, the weighted average price for delivered domestic Hem/Fir logs was $574/MBF, which was 17% lower than a year earlier. Export prices tracked almost exactly to domestic prices throughout most of 2018, however, like Doug fir export logs, the price disparity also grew in December as export prices declined at a much slower rate—0.8% compared to 4%. 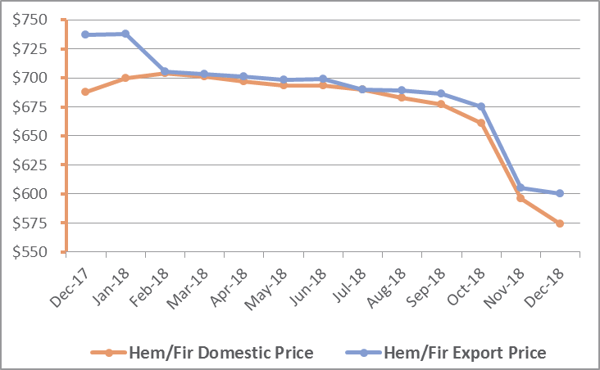 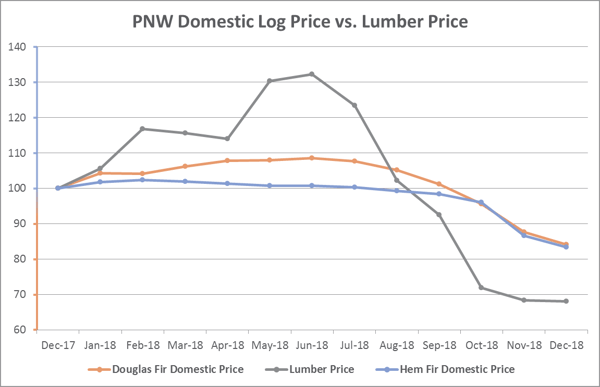 The chart illustrates that lumber prices have declined at a much greater rate than log prices on a percentage basis over the last year. From their 2018 highs to current price levels, percentage drops for each product include:

The combination of domestic and export competition for logs in the PNW drove prices to sustained highs for most of 2018, but a rebalancing of the market has largely taken place. There are three dynamics to watch as we progress through 1Q and into the busy part of the 2019 building season.

The decrease in domestic prices is welcomed news for the regional sawmilling industry, as many of these producers were driven to reduce production—slashing operating hours, curtailing shifts or temporarily curtailing production altogether—over the last year. If we’ve learned anything in that time, it’s that the PNW log market will not stay in a state of inertia for long. Constant analysis of current market prices and market intelligence will be imperative to minimizing costs and maintaining profitability in a highly fluid and volatile market.