For many communities throughout the Pacific Northwest (PNW), Labor Day weekend, which traditionally represents the end of summer, didn’t come soon enough. Likewise, the countless state, federal, and volunteer organizations that have battled devastating wildfires throughout the region are desperately hoping for some much-needed rainfall and cooler weather to subdue the fires. Just over a week ago, 26 fires were burning in the state of Washington alone, the largest being the Okanogan Complex fire that began with a lightning strike and grew to over 250,000 acres in size with 1,250 personnel fighting the fire.

And Washington is not unique. While Okanogan was scorching, there were 26 wildfires burning in Montana, 19 in Oregon, and 40 in Idaho. The damage is extensive and the suppression costs continue to skyrocket; the US Forest Service will spend over half of its budget fighting fires this year. Tom Tidwell, chief of the Forest Service, said that the agency received $1.01 billion for firefighting efforts but that its cost projections could reach $1.53 billion, which would mean that the agency would have to borrow money from other programs. He added, “Once again we have to shut down many parts of our mission to fulfill our wildfire suppression responsibilities within the funds available to the agency.” 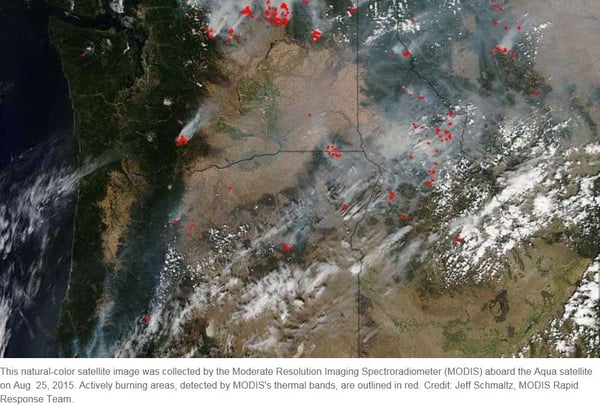 While the threat of summer wildfires is always a reality in the PNW, the uncertainty with which these fires devour the landscape and the total devastation they leave in their paths is not something anyone can ever get accustomed to. Consider the current data out of Washington:

The associated costs of such events are significant when considering the scope of these fires and the related property insurance and healthcare costs, relocation of residents, and rebuilding and cleanup efforts that will continue to affect fire-ravaged areas for years. For instance, a 2015 CoreLogic report notes that nearly 900,000 residential properties in High or Very High wildfire-risk areas of the western US have a total reconstruction value of over $237 billion. A 2010 report by the Western Forestry Leadership Coalition broke down the associated costs even further for actual wildfires that occurred during the early 2000s, and the numbers in these case studies are eye opening. In most cases, the suppression costs (though exorbitant) are well below 50 percent of the total associated costs. 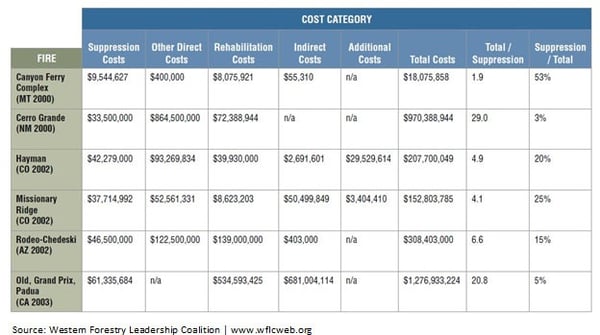 While many aspects of natural disasters will always remain outside the realm of human control, practical, preventative measures could reduce the effects and severity of PNW wildfires in the future. We recently covered the proposed Resilient Federal Forest Act, which is a piece of legislation being sponsored by Rep. Bruce Westerman (R-AR) that would make it easier for the Forest Service to actively maintain federal lands and reduce fire risks. Amid the devastating summer of PNW wildfires, such legislation is garnering attention and gaining ground; two new bills by senators from western states have recently made headlines.

Last week, Sen. Maria Cantwell (D-WA), the ranking Democrat on the Senate Committee on Energy and Natural Resources, and Sen. John Barrasso (R-WY), attended a field hearing in Seattle to promote a bill that will be introduced this fall titled the Wildland Fire Management Act of 2015. Both senators believe that the country should shift away from reactive fire suppression and focus on providing the resources needed to help communities prevent fires. In its own words, the bill would “lower the frequency of large wildfires, reduce the number of homes lost to wildfires, make firefighting operations more efficient and safe, restore fire in our ecosystems, and bring assistance to people in need after wildfires.” Key legislative principles outlined within the bill’s white paper include:

Sen. Cantwell reiterated that "The focus needs to be on preparedness and prevention. We need to do work in advance."

Additionally, Sen. Ron Wyden (D-OR), is seeking support for a proposed bill that would set aside a special line of funding outside the regular Forest Service suppression budget to pay for fighting the largest area fires. He emphasized that a politically-diverse group of western senators supports some form of change to the status quo when it comes to fire suppression, and he noted that the Obama administration and Agriculture Secretary Tom Vilsack support the plan as well. Again, due to the scale of the wildfires this summer and the resulting media attention, such legislation is gaining steam. Sen. Wyden noted, “To have the secretary and the president with us on it is hugely helpful.”

Secretary Vilsack added, “We have a national treasure here, and we want to do a better job of preserving and protecting that national treasure. We just simply have to have the resources and the flexibility to do so, and Sen. Wyden’s bill will give us that opportunity.” One element in the bill would eliminate the "fire borrowing" issue as noted above, in which money is taken from other Forest Service programs to cover the costs of fighting fires.

While those who work in the larger forest products industry understand the importance of properly maintaining our public and private forestlands, most Americans remain unaware of this necessity. As fires continue to ravage the PNW landscape and taxpayer-funded suppression efforts continue to soar, broad public awareness for sound forest management is imperative for any political solution to get off the ground.

Sen. Barrasso highlighted the critical nature of this larger conversation by adding, “We are seeing firsthand how extremely detrimental wildland fires are to families and communities throughout the West. In addition to the loss of life and property, we see a loss of wildlife and wildlife habitat, increased soil erosion, loss of jobs and businesses and degradation of watersheds. Increasing fire costs and severity are the result of excessive fuel loads, overcrowding, drought, decades of fire suppression and declining forest health due to insects and disease. These conditions have created the perfect storm for catastrophic unnatural wildfires, like the ones we have been seeing across the country the last few years, and unfortunately, like the ones we are dealing with in Washington today. Congress must act – for the safety of our firefighters and communities – and for the health of our forests.”

The PNW wildfire fight this summer has left painful and lasting scars in communities scattered throughout the region, especially for the families of the brave firefighters who lost their lives tragically in the line of duty. We must continue to urge our elected officials to enact sound forest management policies that will minimize collateral damage and loss of life in the future, and will equip affected communities with the resources to prevent such disasters to the best of their abilities. Rep. Westerman, Sens. Cantwell, Barasso and Wyden, as well as the bipartisan members of the House and Senate that support their legislative efforts, are to be commended for their swift attention and proactive solutions for healthier forest management and safer communities.

US forest industry
CPI & Forest Products Sector PPI Continue to Expand
US forest industry performance in February and March was recently reported by both the US government and the Institute...
END_OF_DOCUMENT_TOKEN_TO_BE_REPLACED