Consumers and product end-users in the new global economy rarely think twice about the intricate supply chains and logistics networks that must be in place to bring merchandise to market. Efficient, safe, and cost-effective product movement via truck freight—both for in-bound raw materials and for outbound finished products—is critical for manufacturers to maintain competitive positions in their markets. Understanding the cut-throat nature of the global economy, Congressman Reid Ribble (R-WI) plans to introduce legislation that will bring much-needed change to obsolete US truck-weight guidelines and provide flexibility at the state level to improve truck freight efficiencies.

The Safe, Flexible and Efficient Trucking Act (Safe Trucking Act) will be proposed as an amendment to the surface transportation reauthorization, or “highway bill” that is expected to be taken up in the House Transportation and Infrastructure Committee later this fall.

Congressman Ribble’s primary contention is that our nation’s federal vehicle weight limit is outdated and out of touch with today’s engineering advancements and consumer needs. The arbitrary, 80,000 pound truck weight restriction on federal interstate highways has introduced unnecessary costs and inefficiencies to shippers that use our roadways. Trucks are hitting the weight limit well before they are filled to capacity resulting in more trips, more congestion on the roads, more emissions and higher costs for U.S. companies and consumers. Rep. Ribble recently noted that, “For me, it’s not just about productivity, but it’s the increased safety by having fewer trucks moving more product in a safer manner. Our roads are already heavily crowded.”

In the forest products sector, moving harvested trees from forest to facility represents over a third of the raw material costs. While the industry has worked tirelessly to optimize the supply chain system through innovation and technology, trucks are still integral to logging and lumber-delivery operations. For example, Oregon mills currently ship over 40 percent of their lumber by truck to the end user, and almost 30 percent of the state’s manufactured lumber is shipped directly to California. However, lumber shipments by truck in California are limited to a maximum payload that is 20 percent less than the allowable payload in Oregon. Such inconsistencies increase costs for these mills, and they handicap Oregon lumber manufacturers using the interstate highway system. 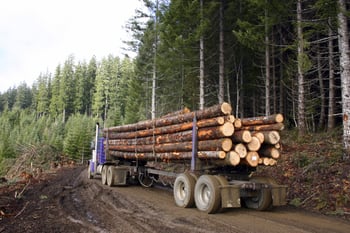 Congressman Ribble’s bill would give states the authority to allow heavier trucks equipped with six axles (rather than five) access to appropriate interstate highways rather than continuing to enforce the confusing patchwork of inconsistent weight restrictions. In the case of Oregon noted above, passage of the Safe Trucking Act could encourage California to adopt maximum truck weight limits more closely aligned to those in Oregon, which would improve interstate commerce along the Highway 5 corridor and make Oregon forest products more competitive.

When the technical findings of the DOT Truck Size and Weight Study were released earlier this year, they confirmed the safety and efficiency of heavier six-axle trucks. DOT reviewed both 91,000-pound/6-axle and 97,000-pound/6-axle configurations and found significant benefits to both, including:

Additionally, the study demonstrated that the 6-axle truck configurations would:

Simply put, if three heavier trucks are safely able to do the work of four conventional trucks, the potential exists to reduce traffic congestion, accident exposure, exhaust emissions and overall infrastructure wear. Achieving such truck-freight efficiencies will allow manufacturing industries—including the forest products sector—to not only remain competitive within their markets, but also to expand and prosper. Regarding the forecasted benefits of the Safe Trucking Act, Rep. Ribble added, “This 13% increase in capacity is heavily significant in moving more freight with fewer vehicles. This would also result in reduced fuel costs and CO2 emissions.”

As we noted last month, the Softwood Lumber Agreement with Canada is scheduled to expire shortly, which creates new challenges for the forest products industry in the Pacific Northwest (PNW). The potential for increased Canadian lumber shipments to the US combined with a favorable exchange rate may place Oregon lumber producers in a very challenging situation. Passage of the Safe Trucking Act could help improve Oregon’s competitive market position by encouraging more advantageous transportation rates and cost savings.

Echoing the sentiments of millions of Americans that rely on efficient trucking and roadway systems, American Forest & Paper Association President and CEO Donna Harman stated, “The transportation crisis in America is severe. Increasing truck weights to the federal bridge compliant weight of 91,000 pounds with the addition of a sixth axle will reduce congestion, decrease emissions and improve global competitiveness of U.S. forest products companies. With the higher weight limit, the space in trucks will be used more efficiently and the number of truck trips for forest products could be reduced by approximately 1.4 million each year. This legislation will reduce miles traveled and improve highway safety. We thank Representative Ribble for his leadership in introducing the Safe Trucking Act and urge its adoption by Congress.”