Pulp and Paper 2022 Year in Review

On January 1, 2022, the Paperworkers’ Union’s strike begun at most of UPM’s Finnish mills. Nearly 2,000 members of the union went on strike, which lasted almost four months until an agreement was reached on April 22. As the strike continued to be extended over the first half of the year, dozens of UPM workers resigned in various parts of Finland, making it difficult to start up all of UPM’s paper machines. Since UPM is a global provider of label materials, these strikes exacerbated the paper shortages that were already stressed from last year’s growing demand and lack of resources – further impacting the recovery of the supply chain issues.

UPM’s operating income for 1Q2022 tumbled 35% to €183 million and its net income was down 40% at €133 million. It’s estimated that these strikes impacted 1Q2022 results by around €180-220 million, considering the lost sales, lower fixed costs and various dynamic effects. Additionally, according to ImportYeti, sales of UPM products plummeted from 306 sea shipments in October 2021 to barely 53 shipments in January 2022.

On February 24, 2022, Russian President Vladimir Putin organized and initiated an invasion into Ukraine. Ukrainian pulp and paper companies were forced to halt production and the military operations occurring throughout the country ultimately led to a breakdown in logistics and supply chains. In response to Russia’s invasion of Ukraine, Europe (the second largest trading partner of Russia) followed NATO and imposed significant sanctions on Russian products. As the sanctions have expanded, the trade of forest products between Russia and the western world virtually ceased.

Many major P&P players also decided to either divest operations in Russia or halt all deliveries to Russia. Some of these companies included Duni AB, Essity, Mondi, Stora Enso, Kemira, and many more.

Along with direct impacts to the pulp and paper industry, this ongoing conflict has created significant trade issues in other sectors as well, especially global energy, oil and gas markets. The world is now facing an extraordinary energy crisis, and there are no simple solutions close at hand. As oilprice.com wrote earlier this year, “Oil prices and energy stocks are trading at multi-year highs after international refiners adopted a self-imposed embargo, with many reluctant to buy Russian oil and banks refusing to finance shipments of Russian raw materials. Refiners and banks are unwilling to do business with Russia due to the risk of falling under complex restrictions in different jurisdictions. Market participants are also concerned about measures directly targeting oil exports.”

Many companies within various industries have spent most of this year reeling from the major impacts this invasion had on the global economy, and we might even see some of these impacts carry into the new year as well.

The top five major grades of the Pulp and Paper industry in 2022 included containerboard, market pulp, cartonboard, printing and writing, and tissue and towel. These five grades have been consistently at the top for a number of years. However, over the last few years, printing and writing has experienced a secular decline, with a CAGR of -1.9% from 2007-2022. With that being said, it’s no surprise that printing and writing was bumped out of the top three grades last year and slipped further down this year.

Cartonboard, on the other hand, secured its spot as the grade with the third largest amount of capacity produced globally – a position it’s expected to remain in throughout 2023 as well. However, there are some concerns about over-capacity. In the last half of 2022, producers were taking downtime in the US and in Europe as growth has slowed. The new start-ups that are expected to come online raise some questions such as whether they will start on schedule or if they will be delayed. 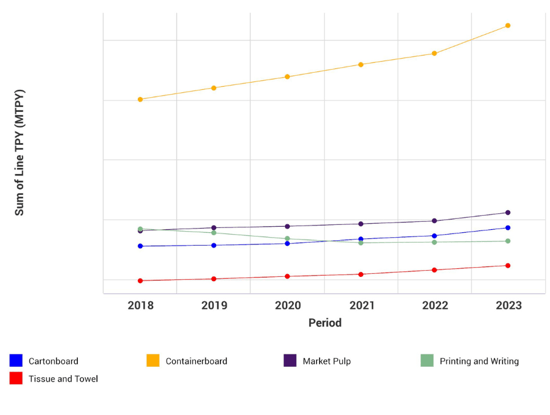 When looking at the image above, we can see that tissue and towel has had the lowest amount of capacity produced out of these five grades. However, don’t let that fool you, as tissue and towel has the highest growth rate with a CAGR of 5.30% from 2007-2022. We expect this growth to continue as Asia alone is expected to add 3 million tonnes of capacity through 2025.

Now when it comes to containerboard, we can clearly see that capacity production for this grade is heads and tails above any other grade in the industry. Current and announced containerboard capacity continues to grow with each passing quarter – largely due to the bustling e-commerce segment that has fueled the need for more shipping boxes. As a result, companies such as WestRock, Pratt Industries, International Paper, Kruger, and many more are investing in expanding domestic corrugated capacity through new boxplants in order to keep up with new demand. The containerboard segment is expected to end 2022 with some of the highest numbers yet and reach new all-time highs in 2023 as well.

With increasing inflation and a looming recession that could negatively impact the e-commerce sector, a few additional questions to keep in mind include:

Throughout 2022, we’ve seen a number of industry participants announce new initiatives that could have a significant impact on global markets in the future. One of these notable announcements was Klabin’s Puma II project exceeding expectations after a year in production.

The Puma II project was initially announced in 2019 and was designed with the intent to produce 920,000 tons of high quality kraftliner board annually. However, in the second half of last year, Klabin decided to take the project a step further and invest in producing Eukaliner – the world's first kraftliner using 100% eucalyptus fiber.

Traditionally, kraft linerboard has been produced using long-fiber softwood pulp. While attempts to produce kraftliner with alternative fibers have largely fallen flat, Klabin’s innovation to use 100% eucalyptus was presented as a possible game-changer for this segment of the P&P industry. So after of year of operation, how did it fare?

After 365 days of operation, Klabin’s first paper machine (the MP27) of the Puma II Project – the biggest investment in Klabin’s history, which includes the construction of two paper machines with integrated pulp production – surpassed expectations and produced over 330,000 tons of Eukaliner and Eukaliner White. The highly impressive machine, which has the capacity to produce 450,000 tons per year, surpassed the learning curve, instilling a trajectory that stands out above many other machines and projects.

Despite another year of ongoing uncertainty and rapidly evolving trends, markets and economies, 2022 has created new opportunities for different industry segments going forward. While we look for some degree of ongoing volatility in the near term, we’re optimistic and excited to see what the Pulp and Paper industry can accomplish in 2023. To make sure you don’t miss any future posts discussing the global Pulp and Paper industry, sign up for Fisher’s weekly blog updates.

Pulp and Paper
Fisher International's Top 7 Most Popular Blog Posts of 2022
The global pulp & paper industry has undergone some significant changes in 2022 – some expected, some unexpected – but...
END_OF_DOCUMENT_TOKEN_TO_BE_REPLACED 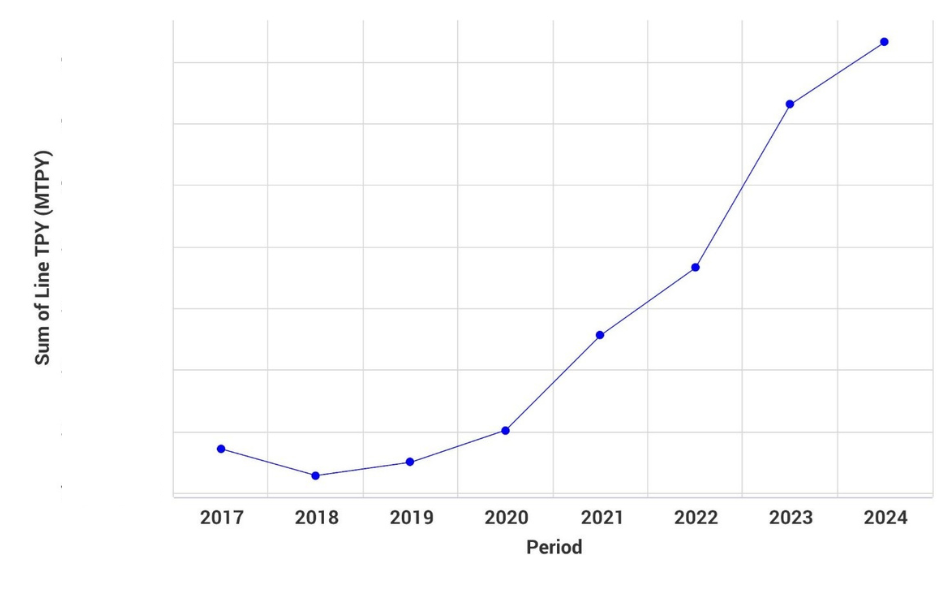 Pulp and Paper
FBB vs SBS: What Will Demand Look Like in the Next 5 Years?
Cartonboard has experienced significant growth over the last couple of years. It currently makes up about 17% of the...
END_OF_DOCUMENT_TOKEN_TO_BE_REPLACED 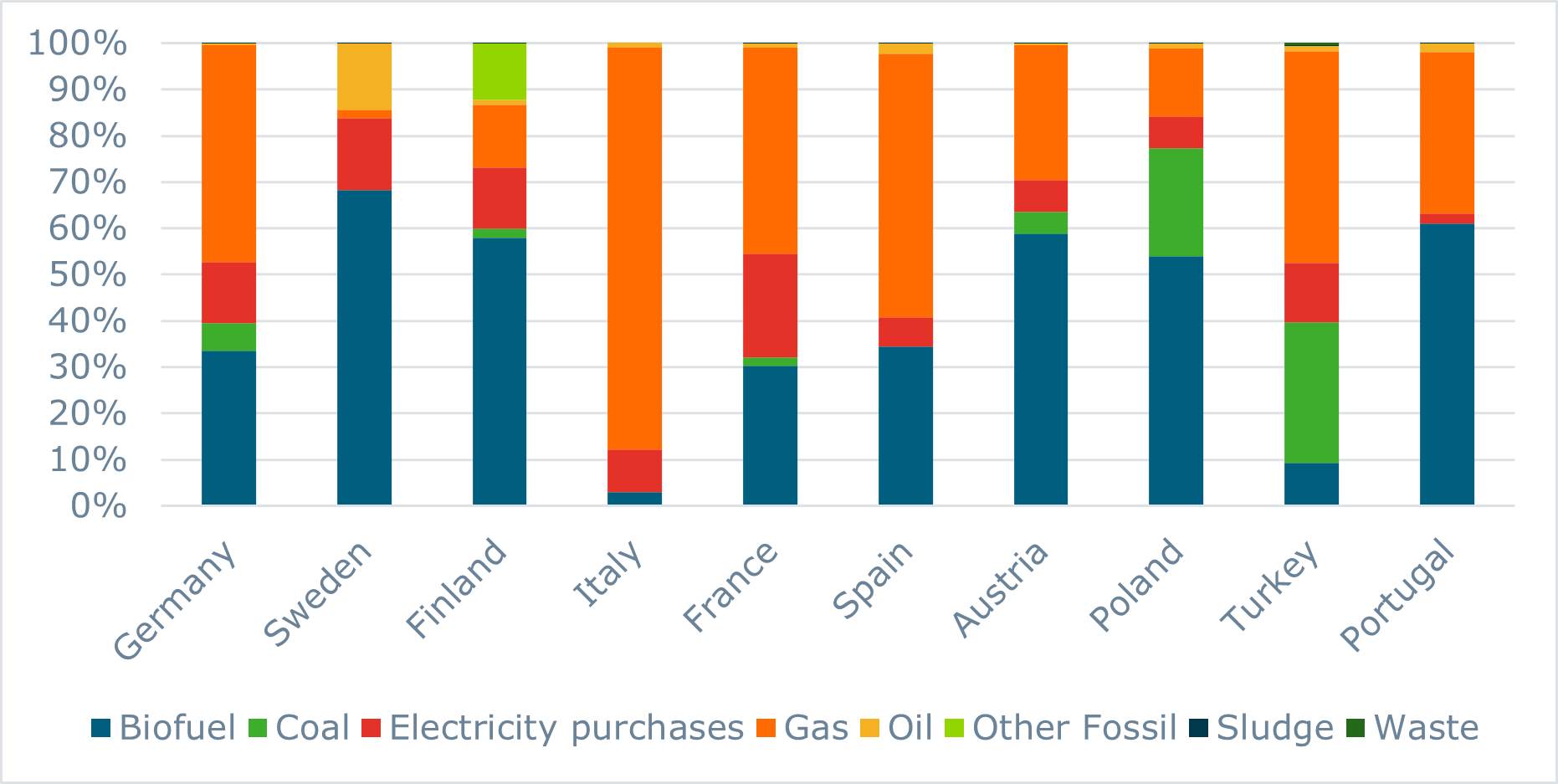 Pulp and Paper
An Overview of the Energy Crisis in Europe and Ways to Respond: 4Q2022
From individual consumers to executive meetings at major companies, energy consumption, the crisis that follows it and...
END_OF_DOCUMENT_TOKEN_TO_BE_REPLACED