Pulpwood and Wood Fuel Prices in the US South 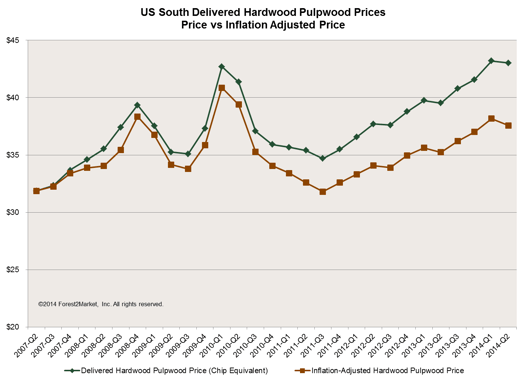 The current US South hardwood pulpwood average delivered price is $43.01 per ton. Year over year, prices have increased $3.48/ton or 8.8 percent from a 2Q2013 average price of $39.53/ton. Although hardwood pulpwood demand decreased 1.2 percent during this period, stumpage prices gained ground. At $2.81/ton, stumpage prices are 24.9 percent higher than they were one year ago. Freight costs also increased an average $0.05/ton or 4.4 percent, and handling increased an average $0.16 per ton or 1.0 percent. 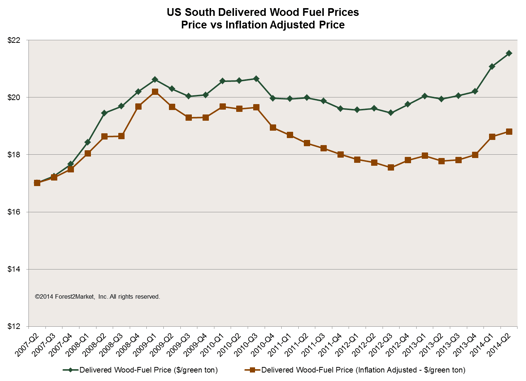 Would appreciate your perspective on the diverging pine vs. hardwood pulpwood price spread.

The majority of the divergence between pine and hardwood pulpwood is related to harvesting and stumpage costs. A significant portion of pine pulpwood in the US South is harvested from plantations that are more manageable to harvest and have predictable cost (normally on average around $13-$14 per ton). Hardwoods, on the other hand, are almost always harvested from native stands that have varying terrains and variable resulting harvests costs (on average around $15-$18 per ton). The rainfall over the past 1.5 years has also influenced an increase in harvesting cost for hardwood pulpwood.

Bioenergy
The Value of Carbon Emission Avoidance with Biopower Generation
Per a recent report published by the National Petroleum Council (NPC)—an advisory committee that represents the...
END_OF_DOCUMENT_TOKEN_TO_BE_REPLACED

Bioenergy
WSJ’s Incomplete Reporting Perpetuates Misconceptions About Bioenergy
A recent article published in the Wall Street Journal notes that the increased consumption of wood pellets in the...
END_OF_DOCUMENT_TOKEN_TO_BE_REPLACED