As we noted last month, China’s building code changes and resulting demand for timber has fueled export growth from a number of global timber producers. However, reduced exports from Canada and Russia have prompted China to increasingly look to New Zealand (and Australia) to fill the gap. Due to its proximity to the large Asian market and robust forest industry, New Zealand experienced record export growth in 2017 that was driven by this demand.

Per Statistics New Zealand figures, exports of logs, wood, and wood articles increased $546 million to $4.7 billion in 2017. New Zealand log exports hit a new record in 2017 as the country exported $2.41 billion in softwood logs in the first 11 months of last year, which exceeded all previous full-year records. Of this total, $1.81 billion in softwood logs were shipped to China, accounting for 75 percent of softwood exports. Per AgriHQ, a data provider for New Zealand’s agriculture industries, the price for Grade-A logs increased to $131/ton at the end of 2017—the highest price since the company began tracking this data in 2008.

Port Taranaki, the only deep-water port on the west coast of New Zealand, said that Chinese demand for New Zealand logs has resulted in a 29 percent increase in log revenue and is prompting the port to develop more land to store logs. Port Taranaki’s annual report said that, “We are also examining means to extend our forestry catchment area and service the growing demand by developing a combined road-rail transport mode for logs. With rail facilities on-hand we have the infrastructure to make this practical and economically viable.” 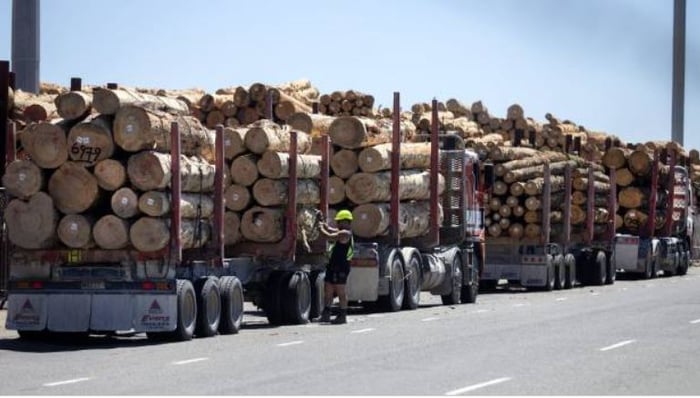 Export logs bound for Asia about to be unloaded at Port Taranaki. Photo: Andy Jackson/Stuff 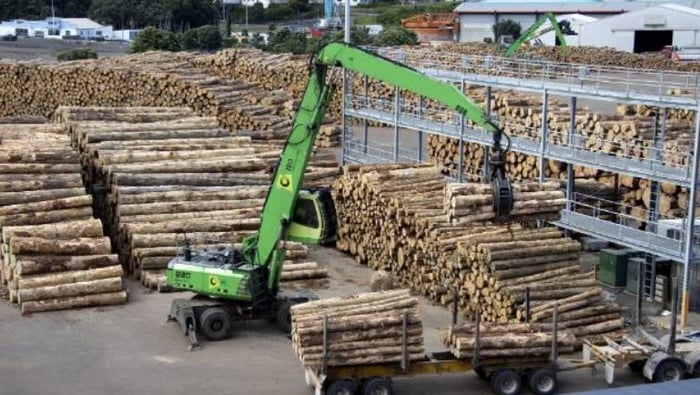 The report added, “Our log business continues to grow exponentially. Favorable market conditions, low inventory levels in China, and large numbers of harvest-ready trees in our catchment area have combined to produce another year of record growth. Following on from the previous year’s record volume of 358,000 JAS[i], for the 2016-17 year 486,000 JAS passed across Port Taranaki’s wharves – an increase of 35.9%.” 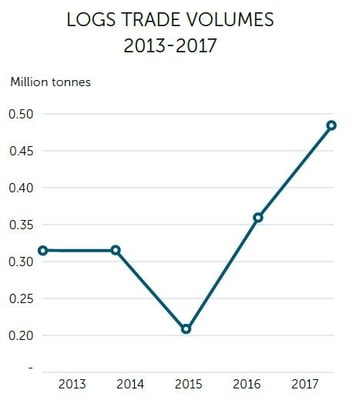 Regional log harvesters and trucking operations are also reaping the benefits of this explosion in growth. Graeme Sole, managing director of local logging/transportation company GJ Sole, said that the dry weather during 3Q2017 increased the ability to harvest logs after almost 18 months of wet weather. "The fine weather has made a huge difference for logging crews being able to get logs out," he said. The company now has 30 trucks carrying logs to both Port Taranaki and Mt. Maunganui to meet demand.

The forest products industry is New Zealand's third-largest export commodity group, and the industry began 2018 with high expectations. The new government has committed to reestablishing the Forest Service to plant more trees, focusing on regional economic development, requiring greater scrutiny of overseas investment in forestry and improving the Emissions Trading Scheme for forestry companies amid concerns that the industry couldn't compete with rival agricultural industries under the current system.

However, some members of the forest supply chain think the boom in Chinese demand will make some of these commitments difficult to fulfill. Critics say that increased shipments of raw wood materials hinder the government’s stated commitment to add value to regional commodities and keep more manufacturing in-country to sustain the local industry. For instance, an uptick in housing starts could result in supply having to be met from overseas if the current situation prevails. While this is an expectation in a market the size of the US, New Zealand is a much smaller and logistically challenging market.

"New Zealand is experiencing strong demand for logs from China, which has clamped down on harvesting its own forests and reduced tariffs on imported logs to meet demand in its local market," said Jon Tanner, chief executive of the Wood Processors & Manufacturers Association of New Zealand. "I’d expect demand to keep increasing and to see more exports out of New Zealand and Australia," he added.

While government initiatives provide the industry with a greater sense of optimism about the long-term future, Tanner said uncertainty remained around the short-term issue for the domestic market if more unprocessed logs continue to be shipped overseas. "We are still very concerned about the competition in the market right now and where that is going and how that is going to be regulated and tackled. We have got a major problem in the set up of the market. We have got a lot of logs being exported, and it's being increased.”

Amid the new overseas demand, Crown Forestry, a business unit of New Zealand’s Ministry for Primary Industries, is seeking to convert unproductive farmland that is suitable for the commercial planting of radiata pine to help it meet the government's “one billion trees” program. The program will cost nearly $2 billion and has a 10-year target that will require the planting of 270,000 new trees each day to cover an additional 500,000 hectares.

Large-scale farmers and landowners are being offered a lease or joint-venture option with Crown Forestry paying all establishment and management costs, paying rent to the land owner and allowing any carbon credits to be retained.

Warwick Foran of Crown Forestry said that "Commercial forestry is impacted by scale - bigger areas give you better returns. Studies show that there is a fair bit of marginal sheep and beef country that is eminently suited to forestry." But Foran added that the conversion of farmland to timberland will be a necessity for the tree planting scheme. "There is not a big land-bank of Crown land available to plant in trees, so effectively any planting of new land is largely going to come off land that is already in existing use."

[i] JAS is the Japanese Agricultural Standard measurement for logs, with 1 JAS roughly equal to 1 ton. 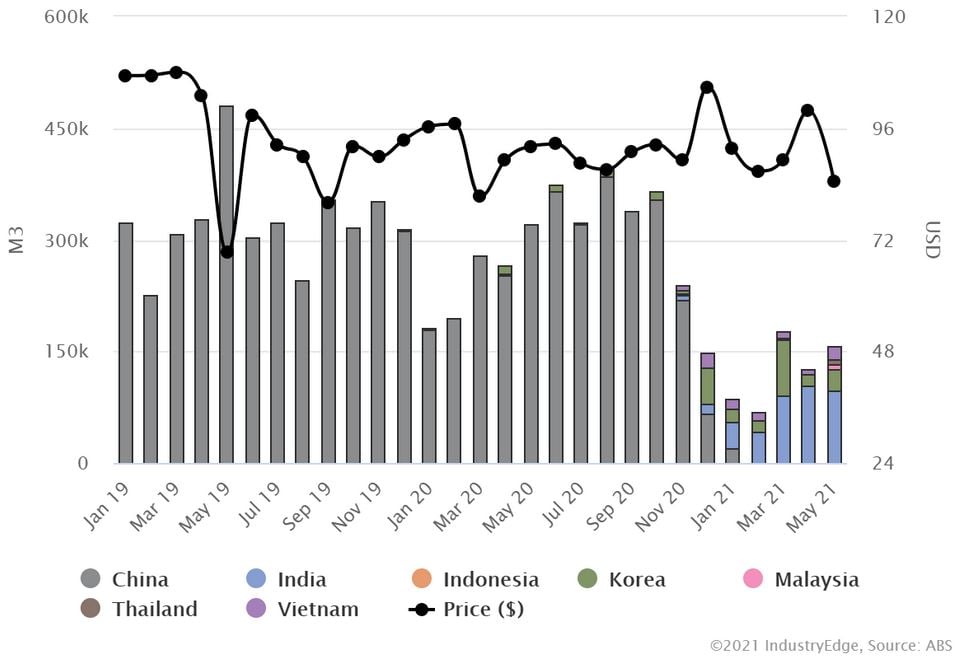 Log Markets
Australian Softwood Log Exports Remain Low as Prices Soften
Australia’s average softwood log export price slumped to a reported AUDFob109/m3 in May 2021, down 16% on the prior...
END_OF_DOCUMENT_TOKEN_TO_BE_REPLACED 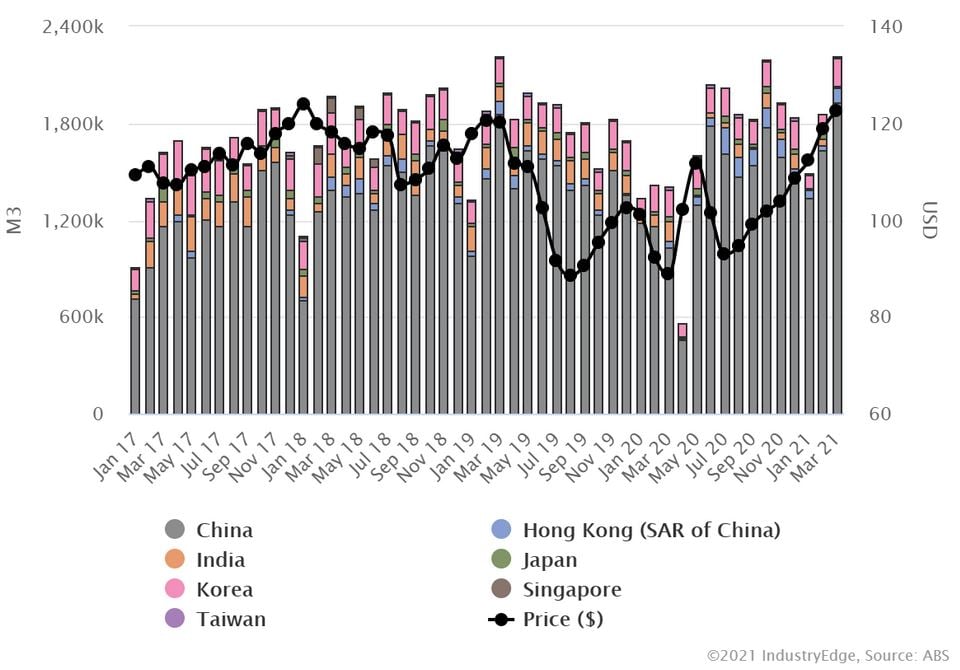 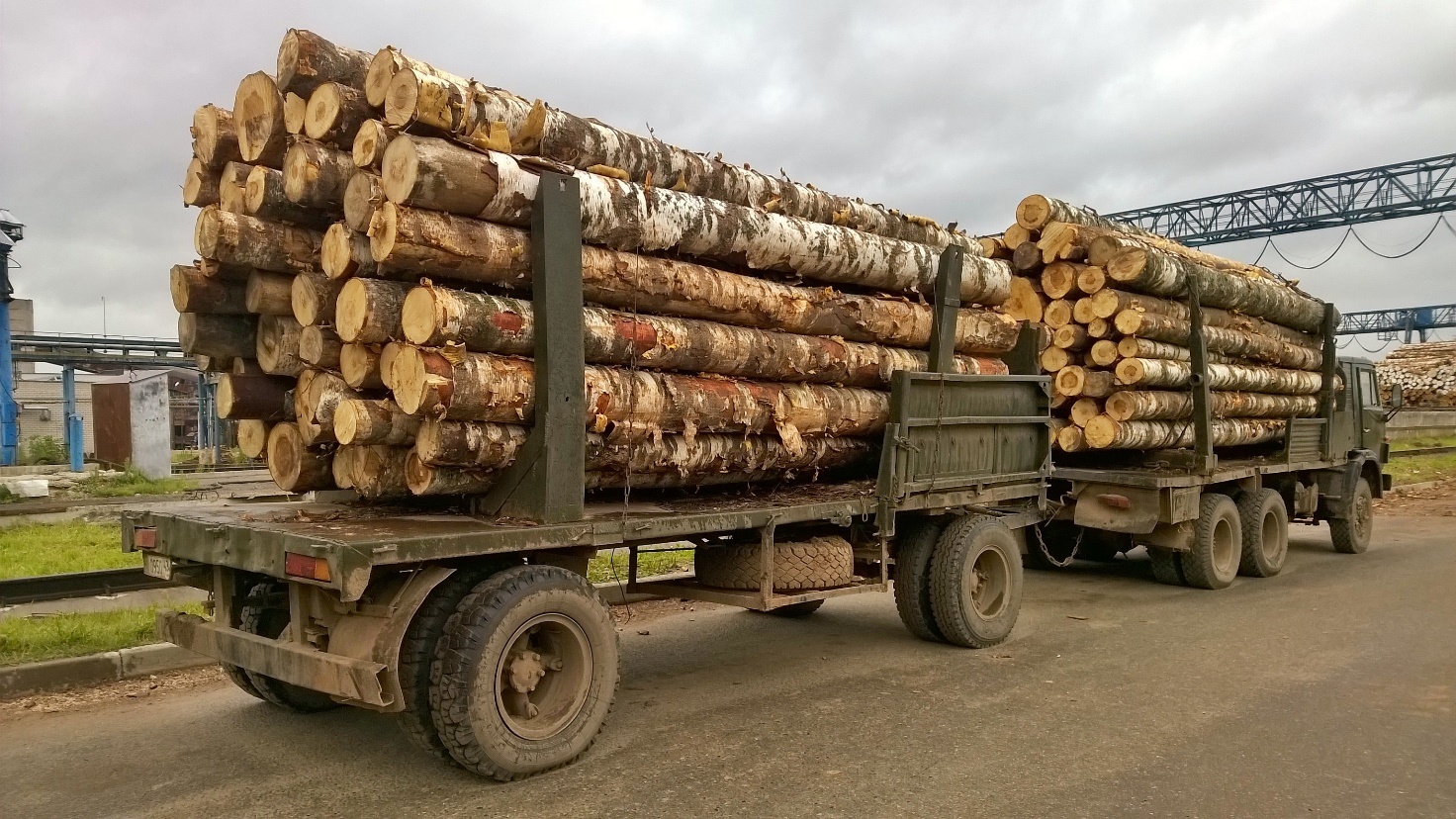