The old truism, “A squeaky wheel gets the grease” is ringing true this wildfire season as national media outlets continue to cover the catastrophic fires that have been raging throughout the American West. As of this writing, there are at least 17 wildfires burning in north California and much of the state’s high-profile wine country has been affected. The fires have claimed the lives of 40 people, consumed over 170,000 acres, destroyed at least 2,000 buildings and forced nearly 20,000 residents to evacuate thus far.

Not only are these fires claiming lives, destroying homes and displacing families, but they are a health hazard for millions that may be impacted by their smoke. In just a few active days, fires in California’s wine country are thought to have produced as much small particulate matter as all the vehicles in the state produce in an entire year.

Sean Raffuse, an air-quality analyst at the Crocker Nuclear Laboratory at University of California in Davis said that these fires have probably produced roughly 10,000 tons of PM 2.5, a pollutant that causes haze and is associated with respiratory and cardiovascular problems. For the sake of comparison, it takes the roughly 35 million on-road vehicles in California to generate a similar amount of PM 2.5 in a year, Raffuse added.

The current fire situation is more dangerous at present because there is more smoke from the thousands of structures that have burned, which can be even more hazardous than typical wildland fire smoke, said Jim Roberts, a research chemist from the National Oceanic and Atmospheric Administration’s Earth System’s Research Laboratory. “It is a little bit different because they had so many structures burn, that is a different fuel mixture... a lot of that stuff has toxic emissions associated with it,” Roberts said. 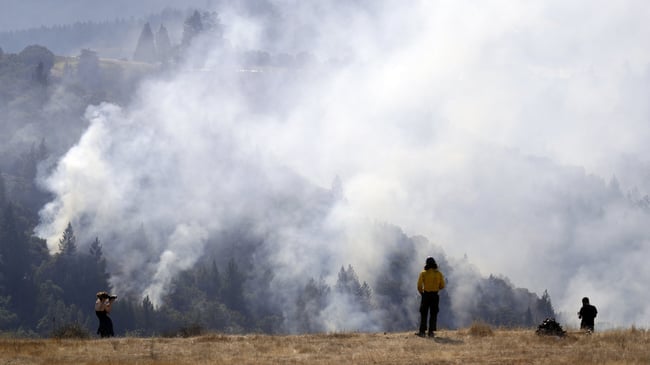 A firefighter (center) and two onlookers watch a smoldering wildfire from a hilltop in Oakville, California.

Fire has always been a sometimes harsh reality within the natural world. But while foresters have long advocated for sensible forest management to help mitigate the damage that mega-fires can inflict, one can only hope that media outlets will provide the same level of coverage to their rational calls for action. Fighting these fires has come at a tremendous cost for both federal and state agencies involved in fire suppression efforts; the USFS has spent more than $2 billion fighting fires this year for the first time ever, and states have spent hundreds of millions more.

Congressman Bruce Westerman (R-AR)—the only forester currently serving in congress—continues to sound the alarm about the issues and regulatory constraints that prevent foresters from practically managing millions of acres in the West. In June, Westerman re-introduced H.R. 2936, the Resilient Federal Forests Act of 2017—a bill that would protect the national forest system by implementing proactive management standards intended to diminish the threat of wildfire, pest and other risks, as well as expedite the regulatory process of forest management projects, salvage operations and reforestation efforts.

Congressman Westerman has also taken advantage of the current media attention to keep this issue top of mind. Together with nine other members of congress from western states, Rep. Westerman recently hosted a press conference to advocate for the Act and further educate the public about the importance of forest management. His opening statement appears below, which cuts right to the heart of the matter that is affecting people, nature and property across all western states.

“This year, multiple natural disasters have hit the United States, leaving billions of dollars in damages across a large swath of land. Hurricanes Harvey, Irma, and Maria have dominated the headlines. As Americans monitor television and online reports of hurricanes, there's little attention on the deadly and destructive fires across the West that have torched 8.5 million acres – nearly four times the land mass of Puerto Rico – sending millions of tons of carbon into the atmosphere in massive smoke plumes that have closed schools, killed livestock, and created serious health issues for people living near and far from these fires.

“As a result, the Forest Service is forced to raid its management accounts in order to pay for firefighting costs, a practice known as ‘fire borrowing.’ This leads to less management, which foster more frequent and intense fires. Simply put, this is unsustainable.

“It is time for Congress to wake up and address the crisis that continues to burn as we speak.

“I am calling on Congress to pass the Resilient Federal Forests Act of 2017. While ending fire borrowing, my bill gives the U.S. Forest Service the tools it needs to actively and scientifically manage our forests.

“There is no downside to a healthy forest. They clean the air, filter water, improve wildlife habitat, enhance plant and animal biodiversity, create scenic landscapes, and can be an economic driver in rural communities through multiple uses including sport, recreation, and timber production.”

Watch the full press briefing below. 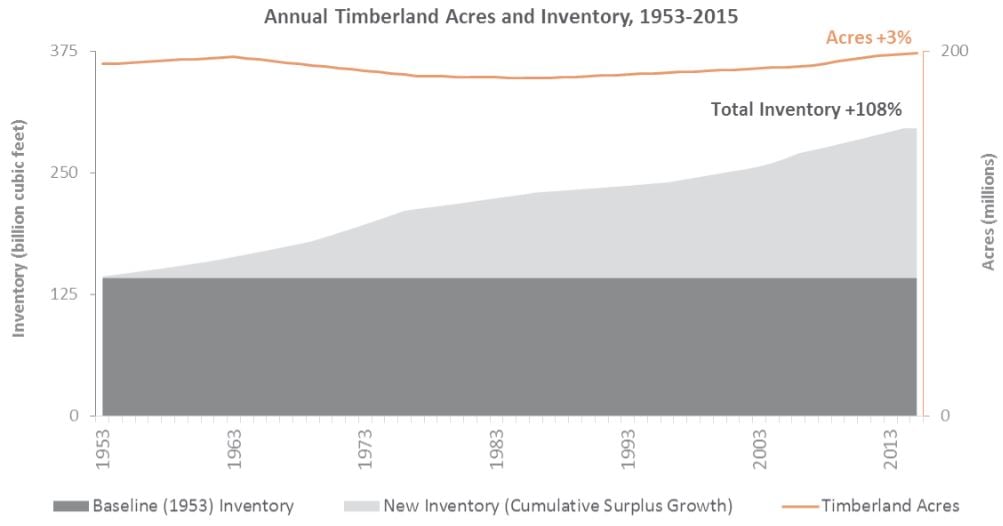 Forest Management
Forest Utilization Drives Both Economic & Environmental Returns
As stated in my most recent blog post, the debate in Washington has progressed from whether policies should be put...
END_OF_DOCUMENT_TOKEN_TO_BE_REPLACED