US housing starts dropped more than expected in September due primarily to flagging numbers out of the US South, which has been recovering from the catastrophic effects of Hurricane Florence.  (While it will likely impact housing activity next month as well, Hurricane Michael also affected the region but technically made landfall in early October). Starts in the South—the US region that accounts for the bulk of homebuilding—plummeted nearly 14 percent last month, which was the largest decline since October 2015.

After increasing 9.4 percent in August, housing starts dropped 5.3 percent in September to a seasonally adjusted annual rate (SAAR) of 1,201,000 units. Single-family starts accounted for 871,000 units, which is 0.9 percent below the revised August figure of 879,000, and starts for the volatile multi-family housing segment plunged 15.2 percent to a rate of 330,000 units in September. 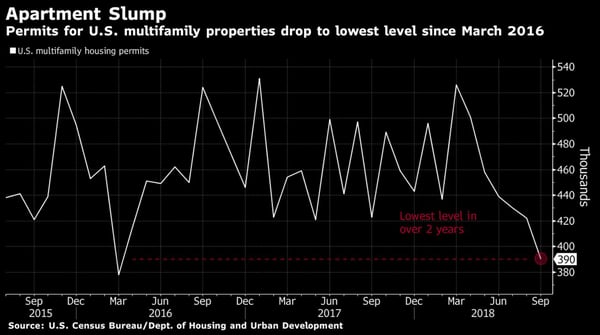 Privately-owned housing authorizations were also down 0.6 percent to a rate of 1,249,000 units in September. Single-family authorizations increased to 851,000, which is 2.9 percent below the revised August figure. Privately-owned housing completions were down 4.1 percent to a SAAR of 1,162,000 units in September. Due to Hurricanes Florence and Michael, regional performance was largely mixed as confirmed by the US Census Bureau report. Seasonally-adjusted total housing starts by region included:

The 30-year fixed mortgage rate increased from 4.55 to 4.63 percent in September, and the National Association of Home Builders (NAHB)/Wells Fargo builder sentiment index ticked up to 68 in early October. While mortgage rates are low by historical standards, the recent rise has outpaced annual wage growth, which has hovered below 3 percent for some time now. House prices, on the other hand, have increased 6 percent on an annual basis and are being driven by the continued shortage of available inventory.

“The flattening of housing construction is essentially in place,” said Steven Blitz, chief U.S. economist at TS Lombard in New York. “Wage growth has begun to improve but not enough to give people the necessary income to carry a mortgage - especially for younger families, many still working out from under student loans.”

It’s important to note that the impact of the hurricanes on housing starts data is likely temporary, and much of the regional data above is quite positive. Also, permits for single-family homes rose 3 percent in September (the most in a year) on strong demand in the Northeast and West, suggesting that builders have a steady pipeline of construction projects.

However, with some signals suggesting that we may have hit peak housing—or we’re seeing the market beginning to soften at the very least—what does the data tell us about housing in the near term? Delphi Advisors provide analytical insights about this topic in Forest2Market’s most recent issue of The Economic Outlook:

Stephen Stanley, chief economist at Amherst Pierpont Securities, noted: “To be clear, there is fundamental softness in housing. Industry sources suggest that the relentless, torrid home price appreciation in recent years has finally reached a point that numerous prospective buyers are balking. In addition, high-end homes in high-tax states are starting to see some effect from tax law changes implemented in December. On top of that, new home construction has been impacted by a run-up in materials costs this year, squeezing builders in a vice between rising costs and a diminishing appetite of prospective buyers to pay up.”

Comments about resales by Bank of America Chief Economist Michelle Meyer mirror those of Stanley. November 2017’s 5.72 million resales was probably the high water mark, Meyer said, thanks to a chill on buyer activity from a rising interest rate environment coupled with rapidly escalating home prices. “The outcome is that the housing market is no longer a tailwind for the economy but has yet to become a headwind. Call it neutral,” Meyer concluded. 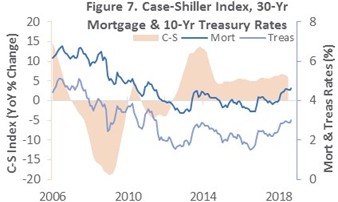 Not only have starts been decelerating since 2013, but home size also has been shrinking. Median floor area of new single-family completions peaked at 2,647 ft2 in 2015 and has subsequently been declining on trend (to 2,426 ft2 in 2017). The median new home cost a record $133/square foot in 2017, +30% relative to 2010. Apartments, by contrast, have been gradually expanding (2017 median: 1,096/square foot) from 2013’s 1,059/square foot. If these trends continue, net changes in demand for lumber and other building materials could well be negative.

With home-price appreciation continuing and mortgage rates trending higher, “the reality is that many potential borrowers can’t crack the mortgage application code,” wrote Peter Miller in a report by ATTOM Data Solutions (ADS). As a result, “nonprime” (to differentiate it from subprime) financing is on an upswing. This prompts the question: Is another housing meltdown in the making. Probably not, ADS’s report concluded, for two reasons: First, the practice of buying homes to “flip” for a profit is nowhere near as prevalent today as it was leading up to the Great Recession; also, many of the “exotic” mortgage products and programs that contributed to the housing crisis no longer exist. 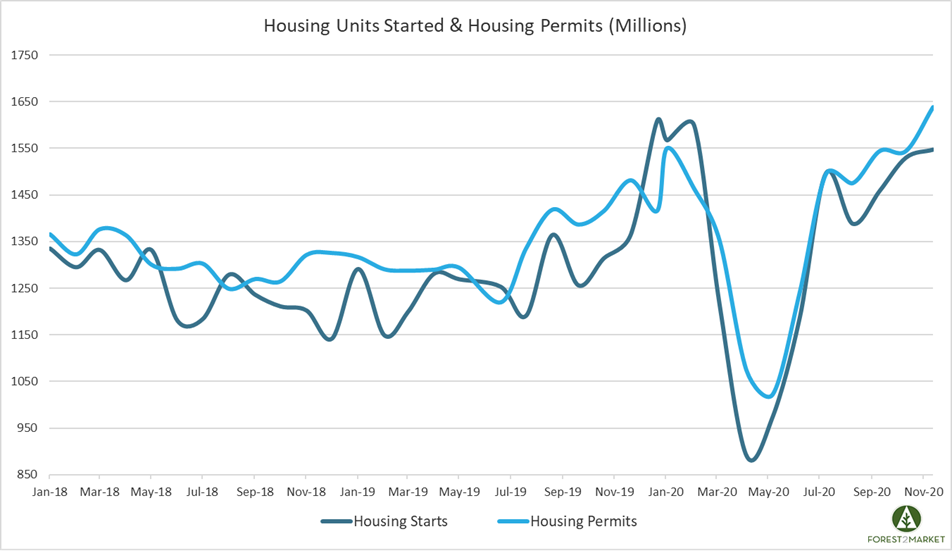 Housing Market
New Residential Construction Still Growing, But Pace is Slowing
US housing starts rose more than initially forecast to a nine-month high in November, highlighting the strength of a...
END_OF_DOCUMENT_TOKEN_TO_BE_REPLACED 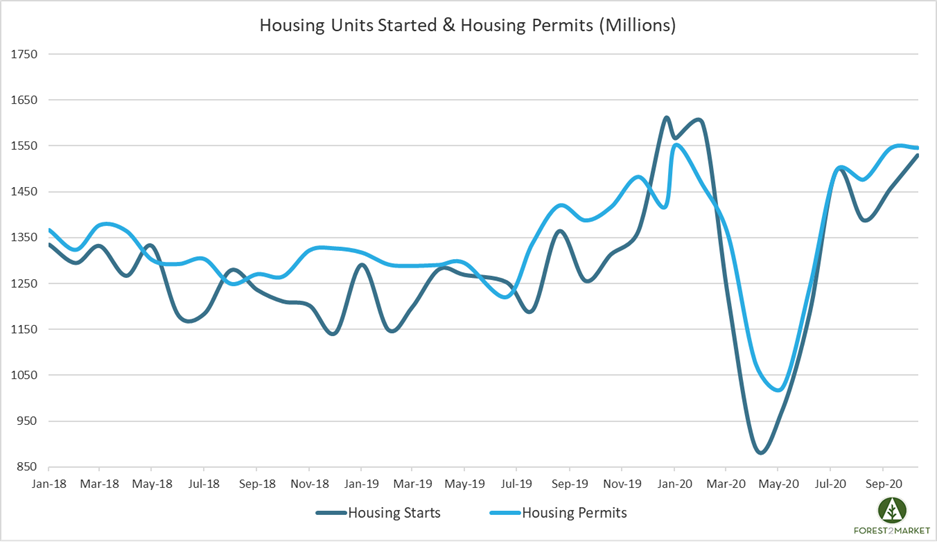 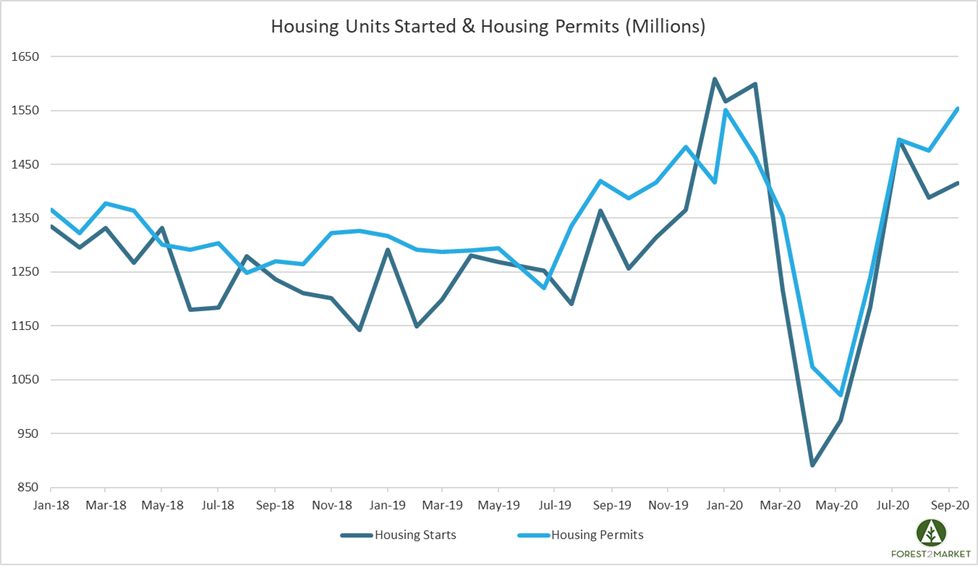