US housing starts inched up in September led by strong gains in single-family home construction, suggesting that residential building has plenty of momentum as we head into the fourth quarter of what has been the most turbulent year in recent history.

Privately-owned housing starts were up 1.9 percent in September to a seasonally adjusted annual rate (SAAR) of 1.415 million units. Single-family starts increased 8.5 percent to a rate of 1.108 million units; starts for the volatile multi-family housing segment dropped 16.3 percent to a pace of 307,000 units. 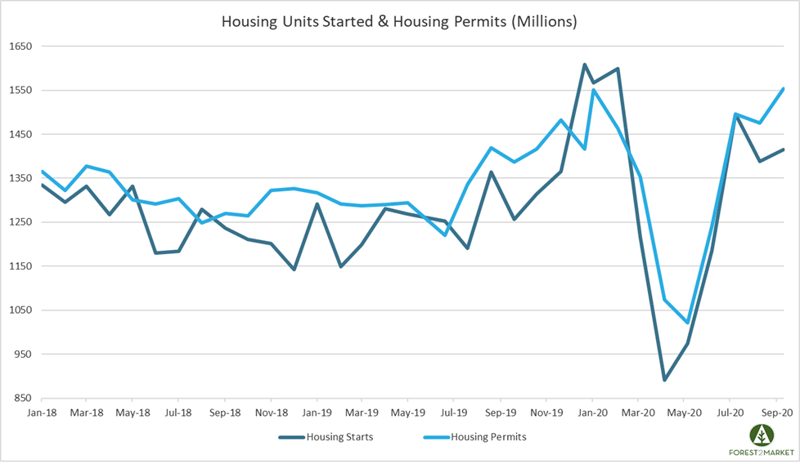 The 30-year fixed mortgage rate dipped in July from 2.94 to 2.89, the lowest level on record. The NAHB/Wells Fargo Housing Market Index (HMI) jumped from 83 to 85 in October, which marks the highest level in the history of the indicator.

“Historic traffic numbers have builders seeing positive market conditions,” said NAHB’s Chuck Fowke, although he warned that “many in the industry are worried about rising costs and delays for building materials, especially lumber. More domestic lumber production or tariff relief is needed to avoid a slowdown in the market in the coming months.”

Per housing market insights published in our most recent issue of the Economic Outlook, Despite NAHB’s commonsense speculation regarding the relationship between housing starts and lumber prices, our internal analysis suggests a weakly positive correlation between lumber prices and housing starts. NAHB’s most-recent home construction survey estimated framing to represent 17 percent of a home’s price during 2019, and that estimate included labor costs. Assuming labor is two-thirds of that cost pegs wood products costs at 5.5 percent of the price of a new home. We conclude, then, that significantly increasing the lumber-cost component definitely will have an impact—although more at the margin rather than flattening the marketplace.

Housing does appear to be on “solid ground” for now—especially since, as we recently noted, lumber prices may have finally peaked and “as sawmills are able to get more lumber production online, just as the usual seasonal drop in demand arrives.” Also, builders are still working through a backlog of projects for which they received permits but could not start earlier this year because of the pandemic. “A still-present overhang of permits that was built up largely in April and May remains to be worked off, and the strength in the single-family housing market is expected to continue given low mortgage rates,” wrote CIBC Economics’ Katherine Judge.

Adding to Judge’s expectation of strength, a Bank of America (BAC) poll found that 14 percent of prospective buyers were accelerating plans to buy single-family homes and property in the suburbs while 42 percent were still on course with their original timelines. “People are thinking really long-term—this is... an aspiration,” BAC’s Steve Boland said, adding, “I thought that was pretty bullish given the [economic uncertainty].”

Whether the optimism presently being expressed by housing analysts proves to be justified depends to a considerable extent upon two factors. The first is employment’s trajectory and its knock-on effects in mortgage delinquencies. Even before the pandemic hit, a number of states were still experiencing a delinquency hangover from the Great Recession; lockdowns in response to the pandemic greatly compounded that issue, as has the slow progress in getting people back to work. The second factor involves the possibility of higher mortgage rates. The Fed has not committed to buying mortgage-backed securities after year-end 2020, which—in combination with the rising federal debt and rule changes at Fannie Mae and Freddie Mac—could boost long-term rates; higher rates would likely diminish mortgage demand.

Lumber Prices
SYP Lumber Prices Stabilize; Is More Volatility Around the Corner?
By late June, the price for finished southern yellow pine (SYP) lumber had tumbled 59% from its 2022 high mark of...
END_OF_DOCUMENT_TOKEN_TO_BE_REPLACED

Housing Market
Housing Starts Tumble to Lowest Level in 17 Months
After a disappointing May and June, US housing starts continued to lose momentum in July as the housing market cools...
END_OF_DOCUMENT_TOKEN_TO_BE_REPLACED

Housing Market
Lower Housing Starts, Higher Home Prices, and Surging Inflation
After a disappointing May (-14%), US home building continued to inch down in June as the housing market cools amid...
END_OF_DOCUMENT_TOKEN_TO_BE_REPLACED