Despite the best silvicultural, forest management and sustainability practices that are now standard in many of the country’s forests, we are often reminded that Mother Nature is ultimately in control. Large-scale wildfires and pest and disease outbreaks can decimate otherwise healthy stands of timber in very little time, and the effects of such an event can last for decades. Even when actively managed, disasters can strike a forest without warning—as recently demonstrated in Alabama.

Per a recent story by Alabama Media Group, state and federal forestry officials are worried that the tiny Southern pine beetle could wreak havoc on Alabama's multi-billion dollar wood products industry this year. The concern is based on the large number of trees already stressed or dying from last year's record-setting drought, which created the ideal environment for pests to thrive. Stressed trees don't produce as much sap as healthy ones, and sap is the tree's primary defense against invading beetles.

"We're in crisis right now because any organism that's under stress is less able to deal with stress, and all of our pine beetles, bark beetles are stressors to trees," said Edward Loewenstein, associate professor of silviculture at Auburn University's School of Forestry and Wildlife Sciences. "When you've got this extraordinary drought like we had this past year, that is a huge stressor put on not only individual trees but entire stands and entire landscapes."

Foresters from the Alabama Forestry Commission (AFC), the US Department of Agriculture (USDA), the Auburn University School of Forestry, Alabama Farmers Federation (ALFA) and various private entities recently met in Montgomery to discuss how to effectively address the situation. While Southern pine beetles are not typically active during the winter months, John Goff, director of the AFC's Forest Protection Division, said the Commission began taking investigative flights in February to look for beetle damage in Alabama's forests and have already discovered 187 likely beetle infestations affecting over 14,000 trees.

The number of beetle infestations has climbed over the last few years even without a major drought, and state forestry officials fear that 2017 could be the worst in memory for Southern pine beetles. "We think the stars have aligned and we have the definite potential for major outbreaks this year," Goff said. Goff noted that the AFC identified 109 Southern pine beetle outbreaks in 2013, 168 in 2014, 378 in 2015 and 691 in 2016. 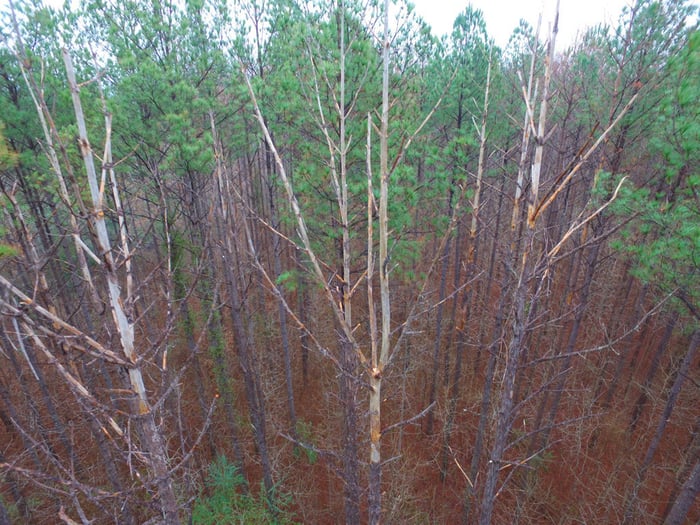 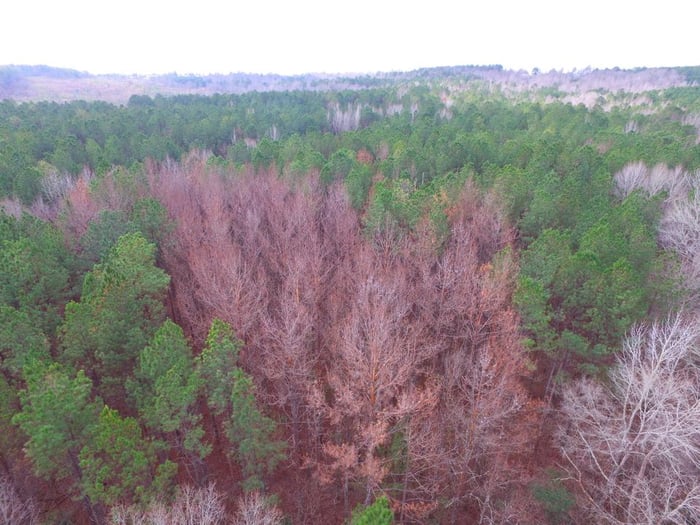 Southern pine beetle infestations typically begin in stressed trees but can spread rapidly and even kill healthy trees as the beetle population increases. Landowners that suspect a beetle infestation are encouraged to contact the AFC or a professional forester to determine the best treatment option.

The usual recommended management practice for a Southern pine beetle infestation is to clear a buffer zone around the infested trees at least as wide as the tallest trees in the group, which should prevent the beetles from spreading. The downed trees can either be burned or left on the forest floor at a safe distance from healthy trees. Loewenstein said the densely packed pine stands in many plantations can make beetle infestations particularly troublesome, and thinning pine stands in advance can help mitigate the damage.

"The trick is to keep these stands before the fact as healthy as possible so they can fight off any additional stressors," Loewenstein said. "If you've got stands that are overly dense, so individual trees within these stands have got very small live crowns, very little foliage, they're in effect being starved and these are stressed trees. If we keep the stands healthy, if you add any one additional stressor, usually the problem is not huge, but right now we've got everything coming together at once." 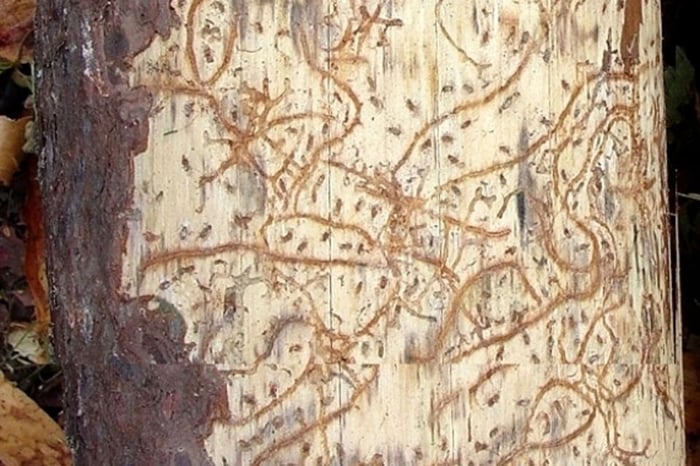 Like most states in the US South, timberland in Alabama is primarily owned by private entities. Nearly 21.4 million acres (roughly 94 percent) of Alabama's 22.8 million acres of total timberland are owned by non-industrial private landowners. The forest products industry is integral to Alabama’s economy, and a pest outbreak could be catastrophic for a number of small-scale landowners who simply don’t have the resources to actively thin and manage their forests.

Keith Plott, who works at the Louisiana-Pacific lumber mill in Hanceville said, "We're hidden. You don't see forest industries that much because we're way back in the woods, we're in small towns, small communities. Folks who own land may harvest once in a generation, but every year there's a lot of folks who do that in Alabama." With such a large-scale pest infestation on the horizon, many landowners may not be able to find crews willing to thin their trees or carve out buffer zones around infested sites, which means they may not be able to find a customer for their wood and they may be forced to let valuable timber decay on the forest floor.

This scenario has made conditions very tight at mills throughout Alabama. "In a catastrophic outbreak like this, we can't take the overflow," Plott added. "We're full. We're going to stay full. So if there are additional products on the market, where are they going to go?"

Like many state agencies, the Alabama Forestry Commission has weathered significant budget cuts in recent years, and it is concerned about that lack of resources to combat this latest outbreak. Right now, communications with landowners is a key priority for AFC, USDA and private forestry organizations. Representatives from the Alabama Forestry Association and ALFA both pledged to reach out to their memberships to spread the word about pine beetles.

Tim Albritton, staff forester with the USDA’s Natural Resources Conservation Service in Alabama said, "This is really a time where communications and quick communications is going to be important. We've got to get this out to the landowners, because private landowners own a majority of the land in Alabama and if we don't get them notified as to what's going on and what they need to do, it could get real bad by mid-summer."

For further information and forest management assistance, proactive landowners in Alabama should contact:

US Department of Agriculture US Forest Service

Lumber Prices
Are Skyrocketing Lumber Prices a Sign of Things to Come?
If we’ve learned one thing about economic uncertainty during the COVID-19 pandemic, it’s that markets will always...
END_OF_DOCUMENT_TOKEN_TO_BE_REPLACED

Forest Management
Australian Wildfires: Impacts to Forest Products Industry
The extent, ferocity and impact of the 2019-20 wildfire season in Australia will be felt long into the future at the...
END_OF_DOCUMENT_TOKEN_TO_BE_REPLACED