Sometimes, there are as many ways to explain numbers as there are people to explain them. When it comes to the lumber market, some rely on the futures market, others use housing start figures and still others use gross domestic product and employment numbers.

We at Forest2Market are in the business of capturing actual industry statistical data. For the past seven years, for instance, Forest2Market has collected pine (SYP) log purchases by sawmills in the South directly from scale tickets. This data gives us a unique perspective on the market.

Currently, operating rates are even higher. Year to date, the operating rate has averaged 87.4 percent. If lumber prices are so high, why aren’t mills running at full capacity? According to our customers, one of the barriers to higher operating rates right now is kiln capacity. Mills just can't dry lumber as fast as they can cut it. This constraint to production has been limiting supply.

Mills are also facing unexpected surges in demand. For the first eight months of 2012 (January–August) the average of annualized starts was 729,000, and mills were maintaining production levels suited to a market of exactly this size. In September, however, the market changed. Housing starts increased 12.5 percent in September, climbing nearly 100,000 to 843,000 (from August’s 750,000). If we look at the average of annualized starts from September through December of 2012 (Figure 1), we see a 22 percent increase over the January–August number to 889,000. In 2013, the average of the January and February annualized numbers has been 914,000, an additional 3 percent higher. 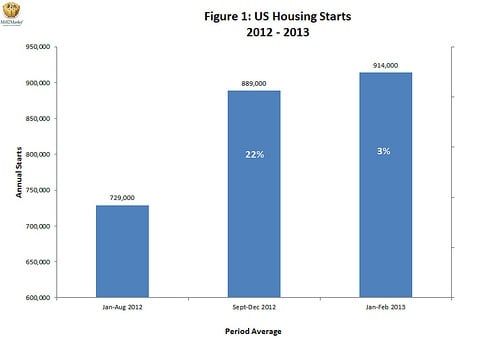 This combination of an unexpected increase in demand and the restriction of kiln capacity has created a perfect storm. The following graph from our Mill2Market weekly market snapshot (Figure 2) shows composite lumber price from the beginning of 2011 through year-to-date 2013. With this data (collected from orders and invoices), we can pinpoint the place in the market when the historic price trend was reversed in 2012. In October, prices were stable (reflecting a balance between supply and demand). They then headed higher for the rest of the year, falling only one week out of the remaining ten. 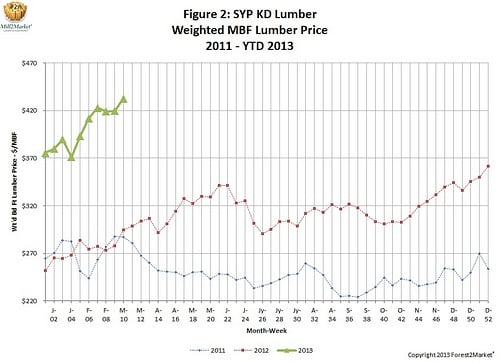 What does 2013 look like? In the short term, we think we’ll see a seasonal drop in price this spring and summer, once shipments catch up with orders. But, we don’t really expect demand to fall; Forest2Market’s housing starts forecast for the year calls for 964,000 starts, a 23 percent increase over 2012’s total. To meet this demand, we estimate that lumber production will increase by 4.2 percent (over 2012) to 15.2 billion board feet (Figure 3). 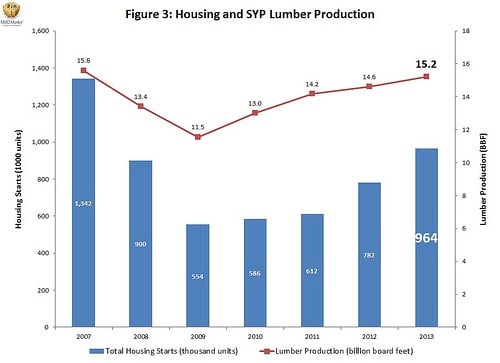 Forest2Market’s lumber price forecast pegs the weighted average price for the year at $416/mbf, with an R-square of 84 percent (Figure 4).  End of year prices will buck the historic trend once again and climb to $437/mbf by December. 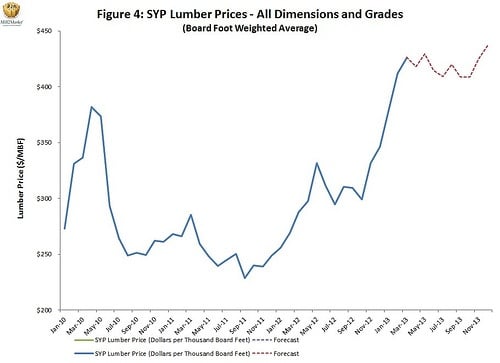 In the longer term, one of two things could happen. If current production and kiln capacity levels are maintained, the perfect storm is likely to get much worse as we return to the historical 45-year sweet spot for housing starts—1.2 million. While the probability that this will happen is low, prices could increase to $500+/mbf as a result. More likely, however, additional production will enter the system and supply and demand will once again be balanced. When this happens, prices will return to the historic trend line.

Lumber Prices
Are Skyrocketing Lumber Prices a Sign of Things to Come?
If we’ve learned one thing about economic uncertainty during the COVID-19 pandemic, it’s that markets will always...
END_OF_DOCUMENT_TOKEN_TO_BE_REPLACED

Lumber Prices
North American Lumber Market: Adjusting to Uncertainty
As I wrote just a month ago—in the initial days of the coronavirus pandemic once it gripped the US— “Even if the...
END_OF_DOCUMENT_TOKEN_TO_BE_REPLACED