After skyrocketing in 1Q2019 due to prolonged wet-weather challenges, southern timber prices reversed course sharply in 2Q and the trend continued through 3Q2019. While pulpwood products decreased at a slower rate into 3Q, pine sawtimber products continued a surprising, yet precipitous drop. The overall trend of all timber products—with the sole exception of hardwood sawtimber—was on a slide in the third quarter, as the weighted average price per ton decreased 7.7 percent.

As mentioned in our 2Q coverage of southern timber prices, it is worth noting that the higher-than-normal rainfall totals the South experienced during 2H2018 and 1Q2019 had a significant impact on the temporary increase in prices. The peaks are evident in the charts below, and prices have sharply corrected course as a result of a return to more typical weather patterns. However, the rate of these price corrections has slowed considerably, suggesting that many segments of the market have largely rebalanced.

Hardwood pulpwood prices Southwide demonstrated a significant correction as well, dropping -10.1 percent during 3Q to $9.97/ton. The East-South region experienced the largest decrease, dropping by -25.9 percent to $4.69/ton, and the Mid-South decreased -5.6 percent to $11.25/ton. However, prices in the West-South rose by +3.2 percent to $14.27/ton. 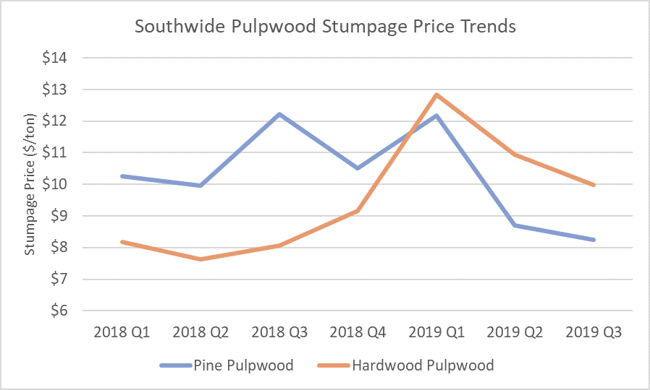 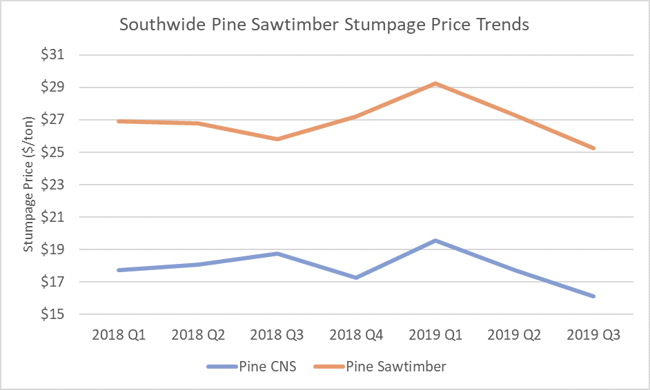 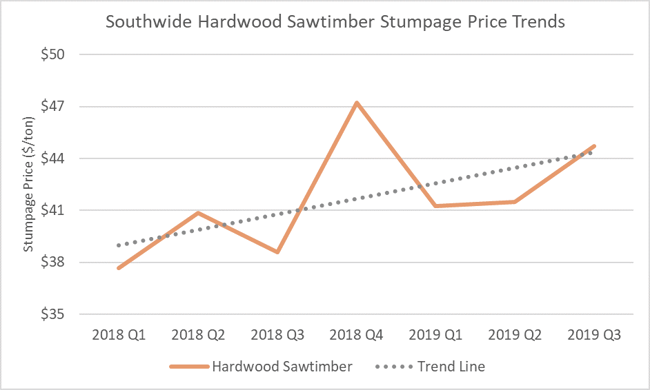 These numbers are noteworthy because they demonstrate pockets of strong hardwood demand in a market that has been significantly impacted by the current trade and tariff situation with China. As noted in the trendline in the chart above, Southwide stumpage prices for hardwood sawtimber prices are still increasing despite the substantial drop-off in hardwood log and lumber exports over the last year.

Real gross domestic product (GDP) increased at an annual rate of 1.9 percent in 3Q, according to the "advance" estimate released by the Bureau of Economic Analysis. After revisions for 2Q, real GDP increased 2.0 percent. Despite solid economic indicators, employment numbers and declining interest rates, US housing starts retreated sharply in September after faltering through most of the busy building season.

Based on declining prices and demand for finished lumber across North America, as well as mill curtailments and closures in the Pacific Northwest and British Columbia, we look for Southwide timber prices to continue to level off into 4Q2019. A rebalancing of the market has largely taken place since 1Q2019 and while temporary market fluctuations are normal, there don’t appear to be any demand drivers on the horizon that would cause significant price movement in either direction.

However, the potential inventory build in 4Q is a supply driver that could impact southern timber prices into the new year. As we enter the winter months, procurement teams will plan ahead in an effort to avoid the supply pinch and high prices that were experienced last winter. That uncertainty may be enough to drive prices higher in order to reduce inventory risk.

Timber Prices
Stumpage Sales Slump: Will History Repeat Itself?
As any professional forester will attest, we quickly learn the truth of an old business adage while working in the...
END_OF_DOCUMENT_TOKEN_TO_BE_REPLACED