In the third week of January 2013, Forest2Market’s framing composite weighted average price hit the highest level since we began reporting southern yellow pine lumber prices: $409/MBF. Due to an $12/MBF drop in the fourth week of the month, however, the composite gained just 7 percent ($27.34) in January to end at $397 per MBF. 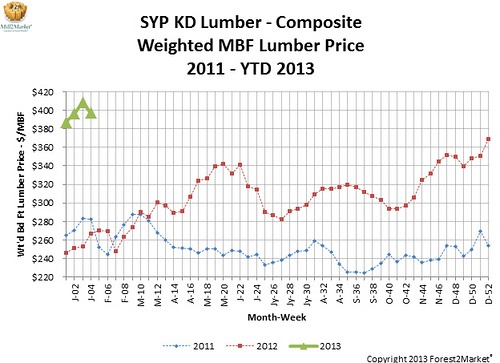 Lumber Prices
Are Skyrocketing Lumber Prices a Sign of Things to Come?
If we’ve learned one thing about economic uncertainty during the COVID-19 pandemic, it’s that markets will always...
END_OF_DOCUMENT_TOKEN_TO_BE_REPLACED

Timber Prices
Where are Southern Timber Prices Headed?
The modern forest supply chain is without guidance for operating in the current pandemic-driven economic...
END_OF_DOCUMENT_TOKEN_TO_BE_REPLACED