Individual product demand does influence the weekly composite price, and #2 2x6x16 PRIME boards led in both volume and revenue for the week ending May 11. These are premium products and the high sales volume/popularity is contributing to the significant jump in prices witnessed over the last several weeks. 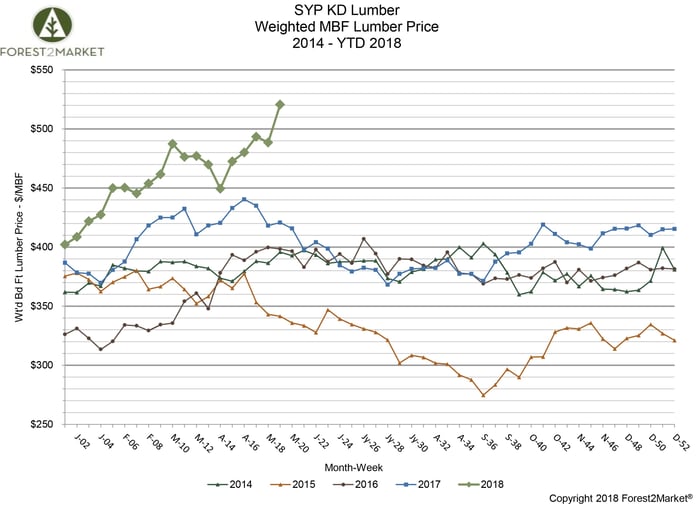 How Long Will High Prices Last?

While all building material prices remain at elevated levels, lumber prices have been driven higher by strong demand and a tightened supply due to tariffs on Canadian lumber imports, a shortage of harvestable acres due to beetle-killed timber in  British Columbia and sustained high log prices in the Pacific Northwest. However, some analysts are predicting a steep drop off in lumber prices in the near term.

“The Canadian situation is clearly a factor here,” says Walter Zimmermann, chief technical analyst at ICAP, the world’s largest interdealer broker. In a recent Barron’s piece, Zimmermann recalls that the 1996 Softwood Lumber Agreement between the US and Canada created a comparable spike in prices, which surged from $346/MBF to $488/MBF (based on lumber futures prices at the time.)

The 1996 spike created a “double top” in combination with what he referred to as the “Spotted Owl Spike” of 1993, which resulted in logging restrictions and constrained supply. A double top is defined as a chart pattern with two consecutive and dramatic price peaks, which often signals a potential market reversal. But Zimmerman believes the current lumber price dynamic is more extreme than the example from the 1990s.

The lumber market has “all the hallmarks of an unsustainable bubble,” says Zimmermann. And “in line with the bursting of bubbles in the financial markets,” lumber prices may peak by mid-2018 before retreating over the next couple of years and into the early 2020s. Based on historical analysis, patterns “suggest a retest of the 2016 lows is a realistic target,” he adds. Lumber futures (which represent a cross-section of the entire lumber market) fell to a low of $233/MBF in January 2016—a more than 50 percent decrease from current prices. (Forest2Market’s composite SYP price for January 2016 was $322/MBF; prices didn’t move much thereafter, averaging roughly $370/MBF for the full calendar year 2016.)

Zimmerman adds that average home prices in the US have reached all-time highs, and long-term charts suggest “an unsustainable super bubble. Issues of affordability will arise. And rising interest rates will already be a factor for 2019.” While this is true, demand for housing and, by extension, home-building materials is very strong and will likely remain so as millennials enter their prime household-formation years.

Economic underpinnings remain solid: Growth is positive (estimates for real GDP growth in 2Q2018 are at 4.1 percent), housing supply remains very tight, wages are increasing at a yearly rate of 2.5 percent and a significant amount of capital investment is flowing into the forest industry, primarily in the SYP-heavy US South at present.

While there are no flagrant warning signs on the horizon for the housing market, the consequences of an “unsustainable super bubble” are inevitable. However, it just may burst later rather than sooner.

Housing Market
May Housing Starts Rebound; Have We Hit Bottom?
After plunging two consecutive months (30 percent in April alone) to the lowest level since early 2015, US...
END_OF_DOCUMENT_TOKEN_TO_BE_REPLACED

Timber Prices
How Has COVID-19 Impacted the PNW Forest Sector?
In the Pacific Northwest (PNW), the forest products industry has rebounded somewhat sooner than most believed it...
END_OF_DOCUMENT_TOKEN_TO_BE_REPLACED

Housing Market
Australia’s April Housing Approvals Push the Cliff Further Into 2020
Expectations of a massive decline in dwelling approvals in April moved out another month, as seasonally adjusted...
END_OF_DOCUMENT_TOKEN_TO_BE_REPLACED