As we noted last month, three significant factors recently converged to drive southern yellow pine lumber prices higher: western US wildfires, hurricanes Harvey and Irma, and a delayed decision from the US Department of Commerce regarding duties on Canadian softwood lumber. After spiking to nearly $420/mbf in early October, prices have receded but still remain high as we approach the end of warmer weather and peak building season.

“The ongoing appreciation in lumber prices is a combination of the [British Columbia] forest fires,” which cut supplies to western Canadian sawmills, and “the industry running their inventory levels down to razor thin levels,” said Greg Kuta, lumber analyst and president of Westline Capital Strategies. But the increase in lumber price is also a function of supply constraints, “more so than a bump up in demand from hurricane-related events,” he added.

It is worth noting that lumber is not unique when it comes to the high cost of building materials in the US right now. As David Logan of the National Association of Homebuilders (NAHB) recently wrote, “The price of OSB increased 4.4% in September and has risen 19% and 38% since September and January 2016, respectively. The surge was in contrast with moderate increases in prices paid for gypsum products (+0.3%) and ready-mix concrete (+0.2%). After declining by a total of 4.1% in June and July, the OSB price index has increased 7.5% over the past two months.”

Other current data related to building materials comes from the Census Bureau’s Survey of Construction (SOC), which shows that vinyl (including vinyl-covered aluminum) was the most common primary exterior wall material on new single-family homes started in 2016 nationwide (27.2 percent). Stucco (24.4 percent), brick or brick veneer (21.8 percent), and fiber cement siding (such as Hardiplank or Hardiboard) (20 percent) followed. Wood or wood products accounted for 4.4 percent and stone, rock or other stone materials accounted for only 1.3 percent.

While end uses for southern yellow pine lumber typically differ from much of the lumber produced in the fire-ravaged Pacific Northwest (PNW) and British Columbia, prices have nevertheless surged since Hurricane Harvey first made landfall. The composite southern yellow pine lumber price for week 42 was at $411/mbf, which is down from week 41’s price of $419/mbf. Week 42’s price is, however, 9 percent above its January 2017 starting point of $378/mbf, and 6 percent above the 2016 week 42 price of $387/mbf.

Lumber Prices
SYP Lumber Prices Deflate in 2019; What’s in Store for 2020?
2019 is now in the books and after 12 months of moderate volatility, southern yellow pine lumber prices finished the...
END_OF_DOCUMENT_TOKEN_TO_BE_REPLACED 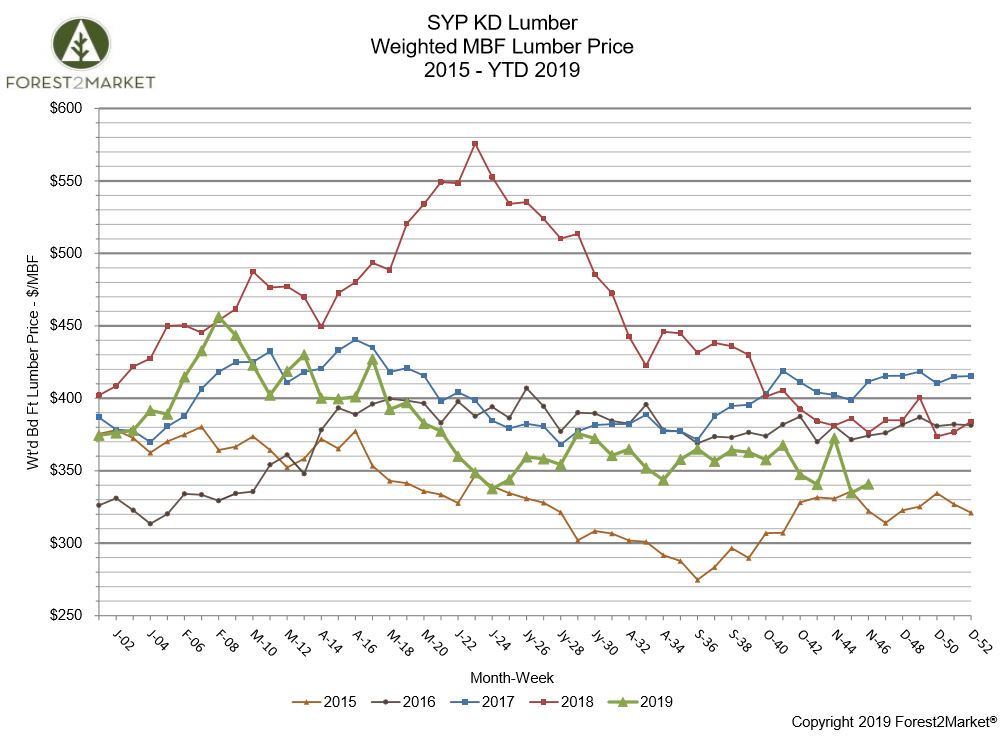