Strong Demand for Lumber Driving Sawmill Expansions in the US South

Over the last few decades, the US South has become the most active region in the country for the forest products industry. While a number of factors have contributed to this trend, it has ensued primarily because the South provides ample access to fast-growing, quality wood fiber that is managed on private lands and is therefore not subject to much of the overbearing regulation that is so pervasive in other parts of the country. This abundance of affordable wood has attracted investment from existing, foreign-owned wood products companies, as well as those participating in new industry sectors, including industrial wood pellets, biofuels and biochemicals.

But there is also continued demand for some of the mainstay products provided by the forest industry, as evidenced by the steady, high price of southern yellow pine lumber and the expansion of new high-capacity sawmills in the pine-rich Southeast during 2016. These developments are good news for working forests, for regional family forest owners and for the preservation of these timberlands throughout the US South.

The composite southern yellow pine lumber price was up at the end of week 42 to the $387/mbf mark. While prices have remained fairly steady through the summer and fall months, this number is 19 percent above its January 2016 starting point of $326/mbf, and 18 percent above its 2015 week 42 price of $328/mbf. What’s driving the sustained high prices? 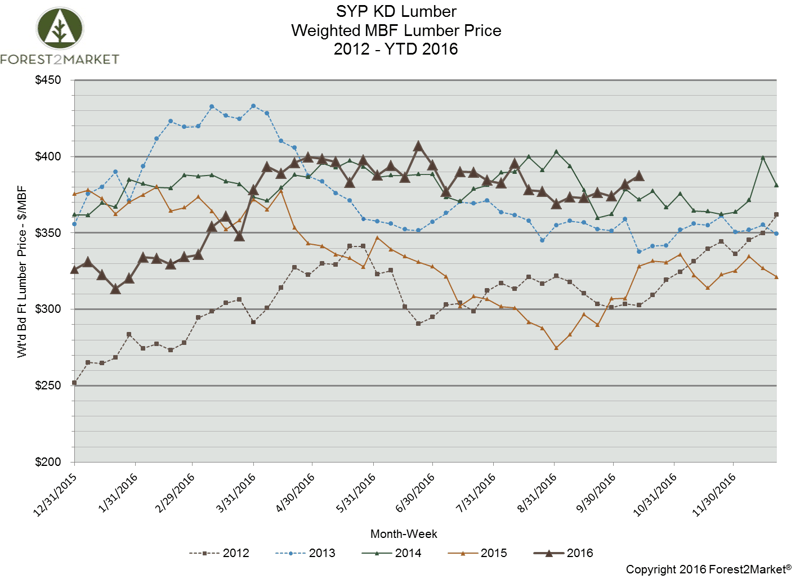 Continued strong demand in the housing market is the primary contributing factor. Home builders haven’t resumed the same high level of activity they engaged in before the recession (despite pent-up demand for housing), and not enough previously-owned homes are available on the market to satisfy demand partly because many homeowners know it will be tough to upsize affordably. As we reported earlier this year, remodeling remains a popular alternative because a tight real estate market has made moving up much more difficult.

The Joint Center for Housing Studies at Harvard University’s Leading Indicator of Remodeling Activity showed that the amount of money homeowners spend on improvements and repairs rose 6.6 percent compared to a year ago in the four-quarter period ending in September. Analysts at the Joint Center forecast those expenditures will continue to accelerate to 8.3 percent in 2Q2017 before tapering off. But the amount of money spent on such expenses will continue to rise through 3Q2017, which would take spending past the 2006 peak for the first time. 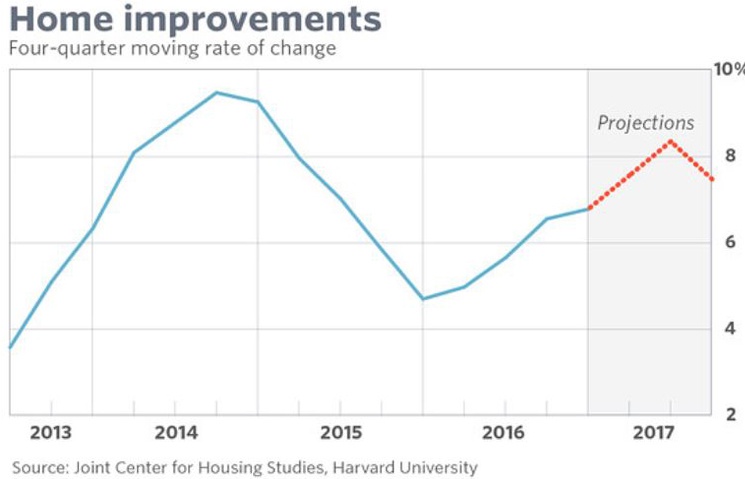 This demand, along with high lumber prices, has led multiple companies across the South to reconsider their production levels. Sawmill expansions are underway in South Carolina, Mississippi, Alabama, Arkansas and Virginia.

West Fraser is expanding its Newberry County, S.C. sawmill operations and the project is expected to bring $33 million in new capital investment to the area. West Fraser’s Newberry sawmill directly employs 155 workers. Since 2007, the company has invested millions to modernize the mill and plans to use the new investment to procure wood, services and goods in Newberry County. The company also plans to install a log merchandiser designed to increase production by more than 37 percent.

Beginning as a small, three-man operation, West Fraser has grown into the largest lumber producer in North America, operating facilities throughout western Canada and the US South. West Fraser produces lumber, laminated veneer lumber (LVL), medium-density fiberboard (MDF), plywood, pulp, newsprint and wood chips, as well as energy through several bioenergy initiatives. “We are proud to celebrate West Fraser’s latest investment in South Carolina and our people,” stated South Carolina governor Nikki Haley. “Anytime a company is able to grow and expand its South Carolina operations, it proves what we already know – that we have one of the most competitive business environments in the world and a workforce that can get the job done for companies in every industry.”

Biewer Lumber started construction on its new $85 million sawmill in Newton, Mississippi in April, 2016, which will create 125 jobs once it becomes operational in 2017. The Newton facility will expand Biewer Lumber’s mill production into the US South. The company is based in Michigan and currently operates four sawmills in the Midwest, as well as three lumber treating/distribution centers.

Mississippi Development Authority provided assistance in support of the project for site preparation and rail and road improvements. Newton County and the city of Newton are also providing assistance for the project. 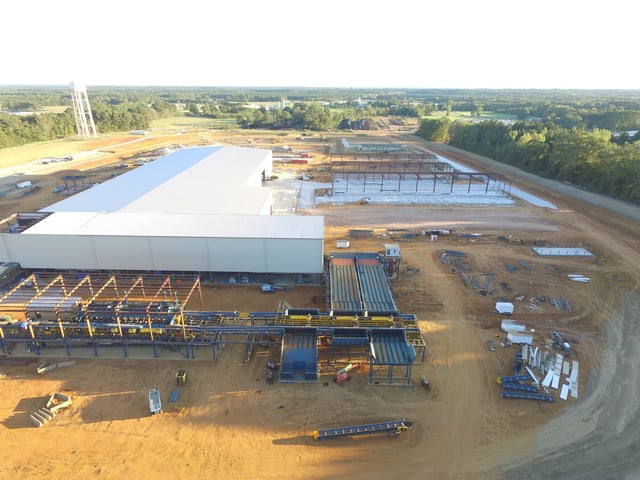 “This is a great day for Newton and the entire East Mississippi region as Biewer Lumber takes the next step toward creating 125 new jobs and significant capital investment in Newton County,” Governor Phil Bryant said. “I congratulate the Biewer team on this milestone and look forward to visiting the company’s state-of-the-art sawmill, once it is officially open for business.”

The Two Rivers Lumber Company of Demopolis, AL will begin construction on a $65 million ultramodern sawmill in mid-January, 2017. Two Rivers is a new entity, and the operation will be the company’s first mill. Two Rivers plans to produce all sizes of Southern Yellow Pine dimensional lumber, which will be marketed throughout the United States. The company has contracted with the BID Group to design and build the sawmill and, upon completion, the mill will have an annual capacity of 200 million board feet. Production is expected to begin in September, 2017.

Two Rivers will initially hire 55 employees and eventually employ around 100 once the facility is operational (not including the 100+ needed for construction). The new sawmill will be located in Marengo County, which one of Alabama’s “Targeted Counties” (fewer than 25,000 residents) under incentives legislation adopted in 2015. This means that the project is eligible for an enhanced benefit for job creation, and local leaders say this is the biggest economic development for Demopolis since 1957.

The sawmill will feature state-of-the-art technologies specifically designed, supplied and installed by the BID Group, including a Comact optimized log bucking system, a Comact saw line with profiling systems and a fully-automated mill outfeed. The planer mill will be equipped with the new Miller high-speed planer, and the latest Comact GradExpert 2.0. Lumber drying will utilize continuous kiln technology provided through a Deltech dual-path kiln.

“The state-of-the-art sawmill being planned by Two Rivers Lumber Co. is precisely the kind of project we had in mind when the Legislature approved enhanced incentives for companies making investments and creating jobs in ‘Targeted Counties’ across Alabama,” said Greg Canfield, secretary of the Alabama Department of Commerce. “Rural counties face a unique set of obstacles when it comes to economic development, and we think this approach gives them a new tool when pursuing projects,” he added.

Georgia-Pacific recently marked the completion of an approximately $40 million expansion at its Gurdon, Arkansas lumber facility. The project expands the production capacity of the lumber mill by approximately 60 percent and includes the installation of a new continuous dry kiln, a state-of-the-art planer mill, as well as related infrastructure improvements. The company is also working to complete additional investments totaling approximately $10 million at its nearby plywood mill that will increase the mill's efficiency and capacity, as well as further reduce air emissions.

"After a lot of hard work and dedication by our talented team in Gurdon, we are excited to celebrate the completion of our expansion project at our Gurdon lumber operations," said Fritz Mason, vice president and general manager for Georgia-Pacific lumber. "Our investment at Gurdon moves the facility to a top-tier asset and extends our ability to meet the growing needs of our customers. It also demonstrates our commitment to the building products industry, family forest landowners and other local wood suppliers, and to the Gurdon community."

"Georgia-Pacific is among the largest employers in southern Arkansas," said Mike Preston, executive director of the Arkansas Economic Development Commission. "This expansion ensures the company has the space and infrastructure that will allow them to continue to thrive in the state. We appreciate Georgia-Pacific's commitment to doing business here as this is a company that provides great jobs for many Arkansas families."

Earlier this year, Virginia Governor Terry McAuliffe announced that Slick Rock Lumber would open a new sawmill operation in Halifax County. The company, which will invest $535,000 in site improvements and equipment needed to open the new hardwood and softwood sawmill, will create 13 new jobs in the county and source 75 percent of its timber needs from Virginia landowners. Its primary products will be railroad ties and large planks to be made into mats for use by utility, construction and logging companies.

This is the first economic development announcement in Halifax County during the McAuliffe administration and the first facility grant announcement for the county. Slick Rock is also committing to purchase more than $5 million of Virginia timber over the next three years.

Investing in the expansion of the forest products industry in the US South while supporting rural communities is positive for America’s working forests. Growing the forest industry means growing more trees, which provide tremendous environmental, social and economic value on an enormous scale. Most importantly, a growing forest products industry will ensure the preservation of our valuable working forests.

Lumber Prices
Softwood Lumber Prices Tumble 40%; Is Another Rally on the Horizon?
The volatile North American softwood lumber market continues to keep us all guessing as we enter mid-2Q2022. After...
END_OF_DOCUMENT_TOKEN_TO_BE_REPLACED

Log Markets
War in Ukraine Will Tighten Lumber Markets in Europe, China and The US
One immediate impact of the war in Ukraine and the sanctions by Western countries has been a dramatic reduction in...
END_OF_DOCUMENT_TOKEN_TO_BE_REPLACED