This is the fourth in a series of posts covering the recently-published report compiled by Forest2Market titled “Changes in the Residual Wood Fiber Market 2004 to 2017.” Our analysis uncovered four key findings that show both structural and temporal market shifts in recent decades have impacted the markets for wood fiber residuals. This independent report was commissioned by Resources for the Future (RFF), the US Endowment for Forestry & Communities, Inc. (Endowment) and the National Wooden Pallet & Container Association (NWPCA).

The study found that there are four underlying market forces that most impacted the residual market.

(Key Finding #1: There has been a structural decline in printing and writing papers and production of other end products derived from hardwood fiber. Key Finding #2: Buoyant demand for softwood fiber has been driven by strong pulp markets and bioenergy in the form of pellets. Key Finding #3: Renewed softwood lumber demand and announced capacity in the US South present challenges, though more for landowners than producers of residuals.)

Key Finding #4: Wood Fiber constraints in the PNW have hindered growth and led to stagnant, but stable markets.

The market structure and supply dynamics for residual material are considerably different in the Pacific Northwest than they are in the US South. Since the early 1900s, this market has focused on lumber production and sawlog harvests. As a result, pulp mills were designed to consume only conifer sawmill chips, with no log handling equipment. Landowners are not accustomed to growing pulpwood, and thinnings for pulpwood are not common, which is result of mill consumption needs and the fact that logging conditions (steep terrain and high logging costs) make thinnings only marginally commercially feasible.

In the aftermath of the spotted owl crisis, which led to harvest restrictions in national forests in the 1990s, nearly half of the lumber capacity in the PNW evaporated. Since then, the demand from pulp mills for sawmill residuals has far outstripped available supply. The balance is made up by pulp logs or sawlog tops that are chipped in stand-alone chip mills. As a consequence, supply factors are the weighting influence on residual chip pricing, not demand. As evidenced below, sawmill residual chips are priced lower than chip mill chips and are always in high demand in the market.

Pulp mills in the PNW are also much smaller than their counterparts in the South. The average mill consumes 500,000 bone dry tons (BDT) annually (vs. 1.1 million in the South), and the PNW market is just 15% of the size of the US South market. Pulp mills do play a vital role in the health of the entire forestry industry in the PNW, however, no other outlets for residuals exist, as neither the wood energy nor pellet markets have developed in any substantial way in the region.

The forest industry in the PNW faces a unique set of challenges that are principally supply driven. Constrained supply for all wood products limits growth opportunities in the region, keeps log and fiber prices elevated and has led to mill closures and capacity reductions. The domestic PNW industry is resource constrained due to the combined effects of four factors:

Timber inventories in the PNW have been strained throughout the study period as evidenced by the elevated sawlog price levels throughout most of the last ten years. Again, due to limited timber supply, sawlog prices recovered quickly after the lows of 2009. By 2013, sawlog prices had recovered to 2007 levels. The elevated price levels limit additional lumber and panel production and reinforce the notion that timber supply limits upside potential.

Domestic vs. Export Delivered Log Price in the PNW 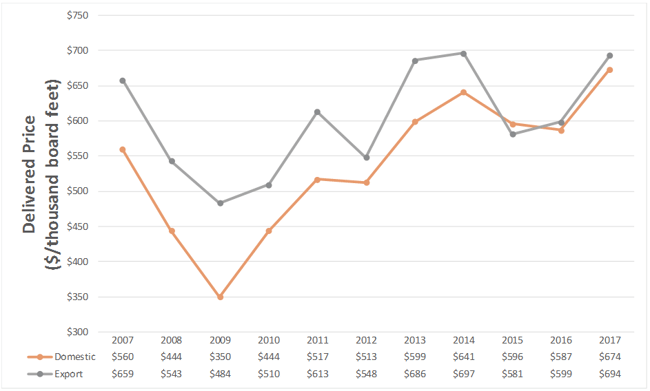 Demand for sawlogs in the PNW has been robust. At the same time, domestic demand for wood chips has decreased because of pulp mill closures. On the surface, one would think that the wood chip demand decrease—just as wood chip production was increasing—would be damaging to the market price of wood chips and create chip backlogs for sawmills. This is not the case, however. Since sawmill chips get consumed first—because of their lower price and availability—pulp mills will increase purchases of lower cost sawmill chips to replace higher cost chip mill chips, a substitution that is certainly beneficial to the economics of the pulp mill and sawmill alike.

Export demand has increased over the study period; wood chip exports to Asia, in particular, have shown some growth. There is also a growing demand for wood pellets in Asia. Unlike the US South, however, industrial wood pellet production in the PNW is virtually non-existent. Despite the forecasted growth in pellet demand for the Asian market, the PNW is simply not in a position to capitalize on the opportunity.

Domestic and Export Chip Demand in the PNW 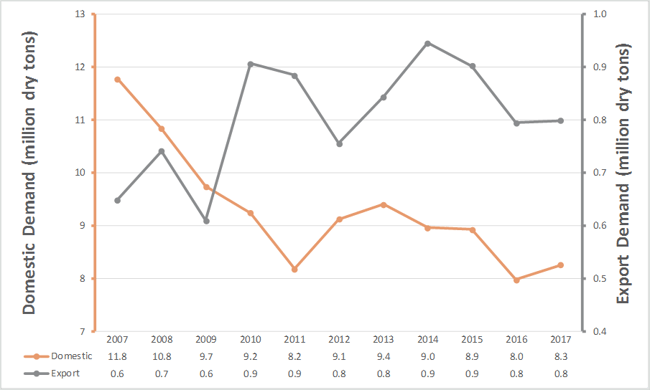 Over the last decade, the trend of conifer residual chip supply in the PNW has mirrored the lumber production trend. Supply is still below 2007 levels, but supplies recovered and stabilized by 2013, just like lumber. Since 2012, annual supply has remained above 5 million bone dry tons. Again, these supply trends show how inextricably linked the restrained sawlog supply, lumber production and eventual chip supply are. Perhaps most importantly, these trends display the limits of the market. 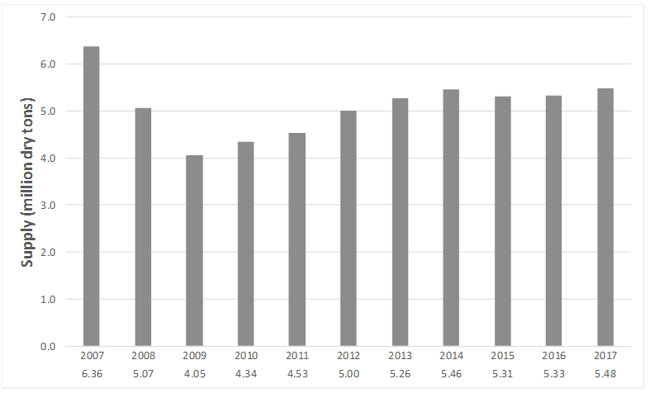 Chip prices in the PNW are volatile, and the volatility is supply driven. Sawmill residual chip prices declined rapidly between 2007 and 2009 as demand dwindled. Prices for residuals were at a high between 2005 and the beginning of 2007 before sawmill production started to decline rapidly in response to the housing market crash. Pulp mills began to lean on whole tree chips to make up the deficit, and this continued through 2009.

In 2010 and 2011, a spike in the market occurred as demand for export chips increased and pulp mill profitability returned. From this point, residue supply began to outweigh demand as lumber production increased. Supply has flattened in recent years, as have volatility and price. 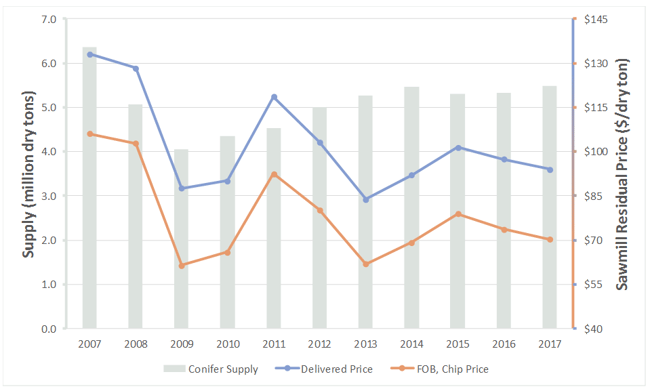 The market for all wood products in the PNW might be best described as structurally stagnant, as the region’s limited timber availability gates the size of the market. Since pulp mills, MDF and MDP facilities are highly reliant on residuals from sawmills, the sawlog resource is the key to fiber availability. Many factors restrict sawlog availability in the PNW, the largest being the lack of harvesting on federal timberland. The added demand of export markets further complicates the supply situation.

In order for the industry in the PNW to grow, new log resources must be supplied. This can come through improved silviculture—improving growth rates—on private timberlands, imports from other markets or increased access to timberland that has been off limits to harvesting. Without new flows for wood resources, however, the PNW will stagnate at its current size. While this could be considered a structural change from a growth perspective, the region’s industry is also reasonably healthy and profitable. That said, the upside potential of the PNW industry is limited due to the structural changes in log supply.

Also notable is the fact that very little capital is flowing to the PNW industry, owing in large part to the restricted log supply and exceedingly high log costs, which are some of the highest in the world. Pulp mill numbers and production have declined dramatically. On the surface, this should be alarming; however, the supply of residual chips is only about half the amount demanded by pulp mills (the rest being made up by chip mill chips).

On the margin, private landowners will improve growth rates and thereby avail more timber to the market. Sawlog imports into the PNW are highly unlikely as British Columbia is dealing with its own sawlog deficit and shipments from any other region would pose too many logistical challenges. The only viable option is to develop avenues to open National Forests to greater harvesting opportunities, without which, the PNW will stagnate at its current size.