Stumpage Market Trends in the US South: Sale and Buyer Types

This series focuses on the stumpage market trends we observed while analyzing the data collected in Forest2Market’s Timber Pricing Service from 2002-2014. This post--Part 2 in the series--highlights reversals in sale methods and buyer types over this time period.

As access to credit tightened and risk increased during the recession, the type of sale most prevalent in the market flipflopped (Figure 3). In an uncertain market, buyers were not willing to go long and tie-up cash in lump-sum sales that would not be harvested immediately. Rather, the market adjusted to pay-as-cut (per-unit) offerings with smaller advances. 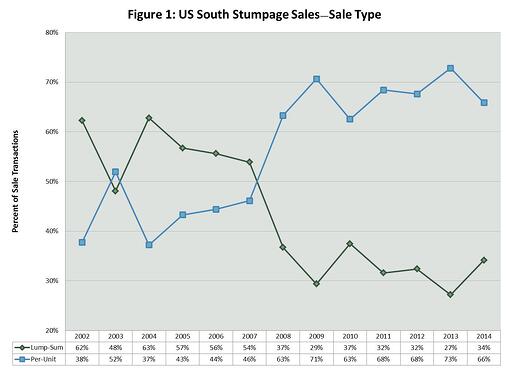 In for-bid sales versus negotiated sales, a similar pattern took shape. Sellers and buyers entered into direct negotiation rather than buyers taking the risk in more competitive, public bid offerings (Figure 4). In 2014, we saw a slight reversal of this trend, and bid offerings increased 4%. 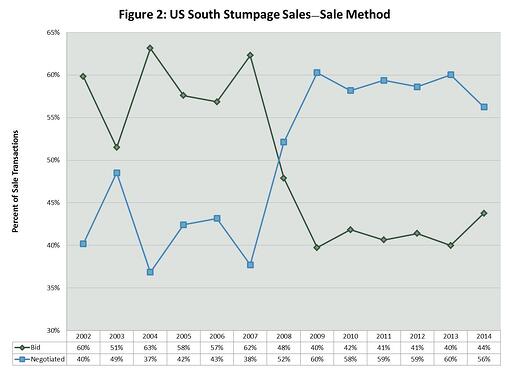 Another trend that evolved during the downturn was a change in mill buying habits, particularly with sawlog and plylog buyers (Figure 5). As these facilities reduced their log purchases, the need for a large procurement staff eroded. As a consequence, these mills no longer had the foresters to cruise and secure stumpage purchases. Instead, a heavier reliance on the dealer/broker/logger system developed. However, since 2013, as these mills have begun to increase production, this trend appears to be reversing as forest products companies are once again entering the stumpage market. 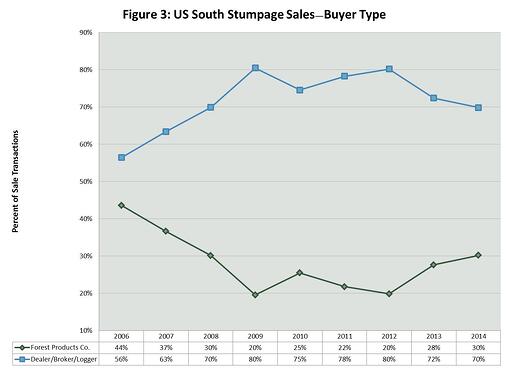 Do you think that these trends will revert to their pre-recession norms? Share your views in the comments section.

Timber Prices
Stumpage Sales Slump: Will History Repeat Itself?
As any professional forester will attest, we quickly learn the truth of an old business adage while working in the...
END_OF_DOCUMENT_TOKEN_TO_BE_REPLACED