The Coming Lumber Gap: Part I

In the first installment of this two-part series, we will examine the looming issue on the horizon that is unavoidable: a sizeable lumber shortage that will need to be addressed if the US housing market is to continue its slow, steady recovery. This supply gap is being driven by the cumulative effects of a number of market forces at work, which we will examine in greater detail in the second installment.

As the forest products industries on both sides of the border continue to adapt to the new US tariffs on Canadian lumber imports, a number of dynamics that could significantly impact the US housing market will be at play in the coming months and years. Despite the resiliency this sector has demonstrated since bottoming in 2009, a lumber supply gap is staring the housing industry in the face, and it must be addressed if the market is going to continue any kind of sustainable recovery.

US housing starts in 2016 totaled 1.17 million units—a nearly 5 percent increase over 2015—making it the strongest year since 2007. To hit that number in 2016, the US housing market consumed approximately 50 billion board feet (BBF) of lumber and of that total, US-produced lumber accounted for roughly 33 BBF while imported lumber—primarily from Canada—accounted for the remaining 17 BBF.

US lumber consumption was up roughly 10 percent from 2015 to 2016, yet US production only increased by 3.4 percent while Canadian production was up 6 percent. Based on these numbers, it is evident that Canada moved a lot of lumber across the border in 2016.

For 2018, Forest2Market is forecasting a fairly conservative 1.3 million housing starts (+4.2 percent relative to 2017). Projected lumber demand in 2018 will reach 51.6 BBF and Canadian imports will likely be substantially lower in the coming months than they were in 2016, which will create a shortage in the market. If Canadian imports make up just 25 percent of demand in 2018 (roughly 13 BBF), the US (and/or other suppliers) will need to make up the difference of roughly 39 BBF. 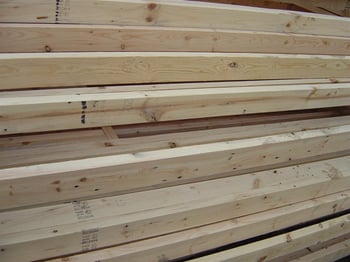 This equates to a gap of roughly 6 BBF based on 2016 data. This gap represents an 18 percent increase over 2016’s total production, and is 12 percent of the forecasted total demand for 2018. Where will this additional supply come from? Who will fill the majority of the gap, and how will it affect prices?

While housing starts were up during the winter months (largely due to mild weather and “pulling forward” some of the spring building), lumber prices have fluctuated wildly since the beginning of the year, and they remain on the (historically) high side. With so much uncertainty affecting the current market, lackluster monthly housing starts for the interim are not surprising. But as more and more Millennials enter into homeownership and this market finally begins kick into high gear, the inevitable lumber shortage will have to be closed to ignite any kind of sustainable growth.

In the next installment, we will examine the dynamics surrounding this coming lumber gap.

Lumber Prices
Softwood Lumber Prices Tumble 40%; Is Another Rally on the Horizon?
The volatile North American softwood lumber market continues to keep us all guessing as we enter mid-2Q2022. After...
END_OF_DOCUMENT_TOKEN_TO_BE_REPLACED

Log Markets
How Do Lumber Producers Determine Log Value?
The red-hot softwood lumber market has garnered a lot of attention over the last two years. Inquiring minds from Main...
END_OF_DOCUMENT_TOKEN_TO_BE_REPLACED