In the final installment of this two-part series, we examine the cumulative effects of a number of dynamics likely impacting the current lumber market. But significant changes in these dynamics in the near-term will both quicken and intensify the demand for new lumber.

Members of the Millennial generation—92 million individuals, the largest generation in American history—are anxiously waiting on the sidelines for their turn at homeownership. We are witnessing a perfect storm of sorts as Millennials begin to actively pursue household formation and homeownership only to find themselves largely priced out of a very tight market. While mortgage rates remain low by historical norms and the unemployment rate continues to drop, it’s simply not enough to convert many in this generation into homeowners. What’s causing the storm?

While these numbers are below expectations, available housing inventory is tight. A recent report by online real estate marketplace Trulia compared the national housing inventory in the 100 largest metro areas from 1Q2012 to 1Q2017 shows that starter homes experienced the largest drop in inventory. During that period, the number of starter and trade-up homes fell roughly 9 percent and 8 percent, respectively. As this inventory becomes scarcer, median home prices continue to rise. Starter and trade-up homebuyers need to spend 3 percent and 2 percent, respectively, more of their income to buy a home now than they did in 2016.

For most Millennials to date, renting has been the only option. Rental inventories have also shrunk dramatically, which has driven up prices and made homeownership a more favorable option in many locations. But the National Association of Homebuilders (NAHB) estimates that the new lumber tariff will raise the price of an average single-family home by $1,236 and $424 for an average multi-family unit. While these increases may seem negligible (especially given that the average new, single-family home price was $368,300 in April), the analysis suggests that every increase in price or rent further discourages homeownership among Millennials.

Trulia also noted that increasing home prices add a new kink to the already complex market dynamic. A lackluster housing recovery might make it difficult for homeowners to sell their current homes, but affordable to buy a new one. Conversely, a strong recovery might make it easy for them to sell, but difficult to buy. Of course, finding a workable balance in this case is the goal of any housing market. But the issue is compounded if families in starter homes simply can’t afford to trade up; they will stay put, and available inventory for first-time homebuyers will continue to shrink.

When the housing market collapsed during the Great Recession of 2008, home construction came to a grinding halt, leaving many workers in the sector without jobs. These workers fled to other industries or other countries, and many haven't returned. Per the NAHB, the building industry employed roughly 3.4 million workers in April 2006; in April 2017, employment was 2.7 million. Jerry Howard, CEO of NAHB recently noted that, "We are now at the point that there is a serious shortage of workers. It's a real problem that ripples throughout the home-building process that ultimately costs the consumer."

Foreign-born workers, the vast majority of whom come from Mexico and South America, make up a large portion of home building and construction crews in the US, and many returned home during the Great Recession and ultimately found employment there. "A lot of workers went back to Mexico," said Alan Laing, executive VP for a national home builder. "The Mexican economy has improved during that time so it's not a compelling proposition to come here.”

The flow of immigrants into the industry has also been slowing for a while and, coupled with the Trump administration’s commitment to enforcing US immigration laws, the shortage of this labor source is likely to continue. “The immigration policies and employment practices make it harder for undocumented workers to gain employment," Laing added.

An increased shortage in available lots has also kept the housing market tighter than it has been in the past. An NAHB report from 2016 showed that the shortage of lots is most apparent in the Western US, where 39 percent of builders said lot supply was “very low,” compared to 23 percent in the South and 18 percent in both the Midwest and Northeast. While the data is not current as of June 2017, the market uncertainty surrounding major events over the last 12 months (the presidential election, lumber tariff, disappointing YTD housing starts numbers, etc.) indicate that lot supply continues to be an issue.

“We have monitored lot availability for the last two decades, and it is clear that the scarcity of building lots is growing,” said NAHB Chief Economist Robert Dietz. “Whether due to land use policy, geographic constraints or other regulatory constraints, the lack of lots for residential construction will have negative impacts on housing affordability in many markets.”

"This study demonstrates the type of over-regulation our industry is facing," said NAHB Immediate Past Chairman of the Board, Ed Brady. "Not only is it inhibiting builders' ability to produce competitively priced homes in a still recovering housing market, but this regulatory burden trickles down to the consumer level and prices many would-be buyers out of the market."

Forest2Market’s current lumber data demonstrates that prices increased rapidly beginning in February before peaking at a 12-year high in April at $440/mbf. However, prices decreased sharply after the new tariff announcement, averaging roughly $402/mbf since the tariff announcement. 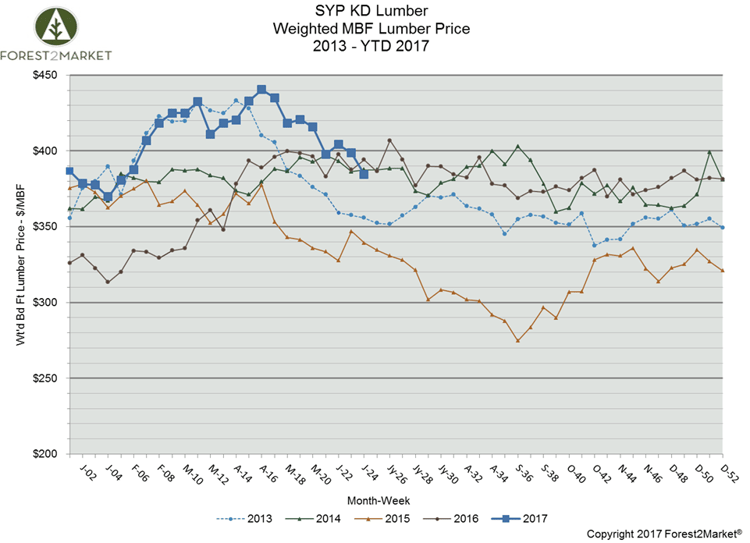 Despite high prices, there is currently a presence of slack in US sawmill capacity utilization. For sawmills, the most-recent data (4Q2016) show a significant gap between full (78.8 percent) and national emergency (59.8 percent) utilization rates. (By comparison, pulp mills’ full and emergency utilization rates are both 85.6 percent.) However, with that much latent capacity across the system, sufficient domestic lumber supply could be injected into the market to address demand and restrict any sustained price run.

All of these dynamics are contributing to an increasingly tight housing market. To say that there is ever-increasing pent up demand would be an understatement. However, when economic conditions and confidence improve just enough that Millennials begin to transition into household formation en masse, the housing market will explode; something’s got to give, and the market generally finds a way to facilitate opportunities. Regardless of the effects of the recently-announced tariff, this is the situation that lumber producers must remain mindful of.

There is a tremendous opportunity on the horizon for those producers that are actively engaged in optimizing their supply chains. It could be the most promising and sustained housing rally in decades and, when the time comes, those producers that have a clear understanding of their operational cost components, flexibility restrictions, strengths and weaknesses and profit margin objectives will be in the best position to take advantage of the opportunity.

Lumber Prices
WRI Market Insights: Global Softwood Lumber Markets
Global trade of softwood lumber fell about 10% in the first half of 2022 compared to the same period in 2021. Most of...
END_OF_DOCUMENT_TOKEN_TO_BE_REPLACED

Lumber Prices
Southern Lumber Prices Continue to Inch Down
After jumping 12% in August due in large part to strong demand from the multi-family construction sector, US housing...
END_OF_DOCUMENT_TOKEN_TO_BE_REPLACED