The Relationship between Demand and Forest Productivity in the US South: Part II

This is the second in a series of posts covering the recently-published report compiled by Forest2Market titled “Historical Perspective on the Relationship between Demand and Forest Productivity in the US South.” Our analysis uncovered seven key findings related to the relationship between demand and forest productivity, which will be explored in this series. This independent report was commissioned by Drax Group, plc, the National Alliance of Forest Owners and the US Endowment for Forestry & Communities, Inc.

Since the middle of the twentieth century, the amount of timberland—unreserved, productive forest land—in the US South has remained stable, increasing by about 3 percent between 1953 and 2015. During this period, economic growth and increased construction spurred consumer demand for forest products, which led timber harvests—or removals—to increase 57 percent. Yet over this same period, the amount of wood fiber—or inventory—stored in Southern forests increased 108 percent.

From 1953 to 2015, US population more than doubled from 159.0 to 321.4 million people, and real GDP increased over six-fold from $2.6 to $16.4 trillion dollars (Figure 2‑B). These shifts increased the utilization of forest products, including paper, lumber and wood panels.

While periods of economic expansion and recession caused annual housing starts to fluctuate in the United States, an average of 1.5 million private housing units were started annually between 1959 and 2006 (Figure 2‑C), a steep increase over the meager 360,000 started annually in the 1930s and 1940s. Homes also became larger: The average size of a single-family home increased from 1,498 square feet in 1965 to 2,687 square feet in 2015 (Figure 2‑D). Together, these changes increased demand for lumber, plywood and particle board, the staples of American home construction.

The Great Recession had a severe negative impact on the forest products industry, especially sawnwood and panel production, which decreased 44 and 35 percent, respectively, between 2005 and 2009 (Figure 2-A, Figure 3). Production is gradually improving but has not yet attained pre-Recession levels.

While industrial wood pellet production in the United States has increased dramatically since 2009, its rate of growth has moderated and remains dwarfed by pulp and paper production (Figure 4). 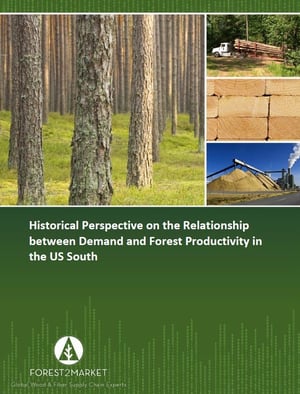 Forest Management
Australian Wildfires: Impacts to Forest Products Industry
The extent, ferocity and impact of the 2019-20 wildfire season in Australia will be felt long into the future at the...
END_OF_DOCUMENT_TOKEN_TO_BE_REPLACED