Top 10 States Where Wildfires Cause the Most Damage

The heat and drought of the summer months is quickly approaching, which means that the US Forest Service (USFS) and fire-fighting crews all over the country are gearing up to do battle in some of the most dangerous conditions on earth. The USFS notes that each year, an average of more than 73,000 wildfires burn about 7 million acres of federal, tribal, state and private land and more than 2,600 structures, and the costs of fighting these fires is ever-increasing.

In 1995, wildland fire cost consumed 16 percent of the USFS budget; in 2015, that number rose to 52 percent, and projected costs for 2025 assume fire will consume roughly 67 percent of the budget. In 2015, when severe drought in the west created conditions favorable for wildfires to spread, over 10 million acres burned. Some areas of the country are more fire-prone than others, and we have written extensively about the importance of sound forest management practices, which could help mitigate damage from wildfires on western lands.

Another added cost of fire suppression that is not so easy to quantify has to do with USFS staffing. As the agency is forced to continue concentrating its resources on fighting fire, considerable manpower is consequently pulled away from other agency duties such as facilitating timber sales on state and federal lands. In the Pacific Northwest (PNW), this has a compounding effect of making it more difficult for the region to reach its timber sales goals while allowing for the continued overgrowth of the forest.

Before the wildfire season gets into full swing, the USFS and partner agencies must look at some of the historical data out of various regions—along with current and projected weather conditions, dead timber inventories, and a number of other factors—to put together response scenarios. To apply some context to the sheer destructiveness of wildfires, financial news and commentary content provider, 24/7 Wall St., recently published an article that takes a unique look at wildfire destruction in each US state[1].

For each state, the research examines area burned and wildfire damage over the last decade as a percentage of total area, as well as large-scale fires (100,000+ acres) over the last 20 years, and some of the state results are surprising. For instance, while over 12 million acres burned in Alaska over the last 10 years, it is not one of the most “wildfire damaged” states due to its size and total wooded acreage (Alaska did come in at #11 on the list). The data also includes acres consumed by planned and controlled burns, which can provide some insight into the amount of active forest management taking place at the state level.

Despite Texas’s whopping 9,300 wildfires in 2016, it’s not surprising that western states make up four of the top five locations. The Pacific Northwest’s (PNW) dense forested acreage and summer climate provide ideal fuel for wildfires to take over. But what can we learn from Idaho at #1? The total area burned in Idaho over the last decade is nearly twice that of Oregon in the #2 spot. Idaho had the 23rd fewest wildfires in 2016 at 630, and had the second most large-scale fires (27) over the last 20 years. And while Idaho did implement planned burns at a higher-than-average rate over the last decade, the state still lost nearly 7 million acres to wildfire.

How is the 2017 wildfire season shaping up thus far? The National Interagency Fire Center issues a monthly significant wildland fire outlook to improve information available to fire management decision makers and communities that may be effected by wildfire. While there are pockets in regions that demonstrate an “above normal” fire potential for June (the most recent forecast available), most of the country—including the PNW—is under “normal” conditions. There are even a few pockets that fall under the “below normal” threat level in fire-stricken Idaho and California. 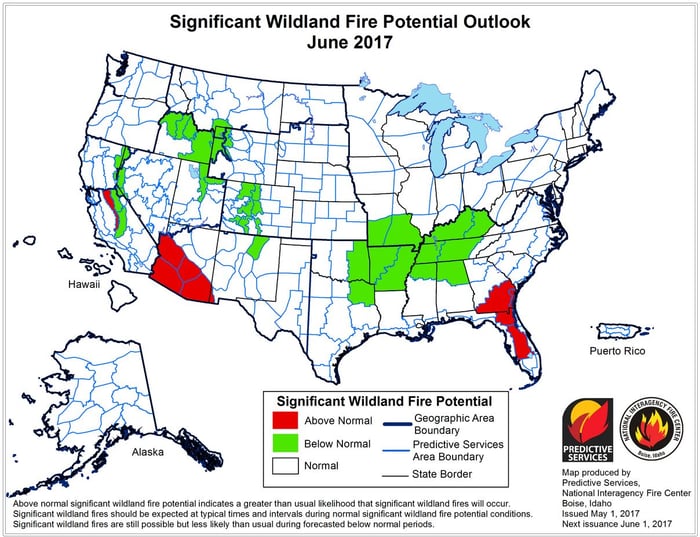 This is good news for the USFS and partner agencies heading into the summer months. The western states received enough rainfall and snowpack over the last six months to vastly improve the drought conditions they have endured in recent years. An Oregon Basin Outlook Report by the USDA notes that snowpack levels are at 155 percent of normal. “Almost every site in the state accumulated more snowpack than normal at the peak of the season. In general, sites across Oregon reached 110% to 160% of normal peak snowpack levels this winter and the remaining mountain snowpack is still well above normal as of May 1st. The last time a snow season was consistently above normal throughout the state was in 2011.”

Though the fire potential outlook for this season looks better than it has in recent years, the forest products industry and all residents of the PNW cannot afford to lose sight of the critical need to increase active forest management practices, including fuel-reduction efforts and thinning in forests that are prone to devastating fires.

[1] To determine the states with the most wildfires, 24/7 Wall St. reviewed data from the National Interagency Fire Center’s Fire and Aviation Management Web Applications Program. The figures are the sum totals of all wildfires reported by the Bureau of Indian Affairs, the Bureau of Land Management, the Department of Defense, the U.S. Fish and Wildlife Service, the National Park Service, the U.S. Forest Service, and other land management departments from 2007 to 2016. The number of large fires refers to the number of fires that burned more than 100,000 acres of land, and also came from the NIFC. The percentage of land burned by wildfires from 2007 to 2016 was calculated by dividing the total acreage burned by wildfires over that period by the total land area of a state, with data from the U.S. Census Bureau that was converted from square miles to acres.