The global forest community and forest products industry are beginning to change the anti-forestry narrative that has so dominated the news cycles for decades. This is progress that is long overdue. Rather than approaching the educational and outreach efforts with a haggard reliance on emotionally-driven images (that are but a snapshot in time and do not reflect forest life cycles), the forest industry has tangible, positive data on its side. Proof always wins in the end, and the overall health and sustainability of America’s forests is best represented in the fact-based conversation that is occurring now.

A number of organizations advocating for, and operating within the forest industry have contributed to the ongoing conversation about the improving wellbeing of our forests. Organizations like the National Association of Forest Owners (NAFO), the newly-formed North American Forest Partnership (NAFP) and the Biomass101 initiative — and many other partners from every part of the forest value chain — are involved in telling these stories from their own unique perspectives. The case is made time and time again, with the support of reliable data, that America’s forests are flourishing.

Two Sides North America, an organization promoting the sustainability of both the graphics communications industry and forest resources, recently released a creative piece of messaging that uses spatial comparisons to illustrate the significance of this data. Per the message titled “Some Thought-Provoking Analogies on Paper, Forests and Recycling,” Two Sides North America President Phil Riebel notes:

The campaign also includes a visual element (below) developed for Two Sides publisher partners, who also help to promote the positive environmental story of sustainable forest management and the forest products industry. 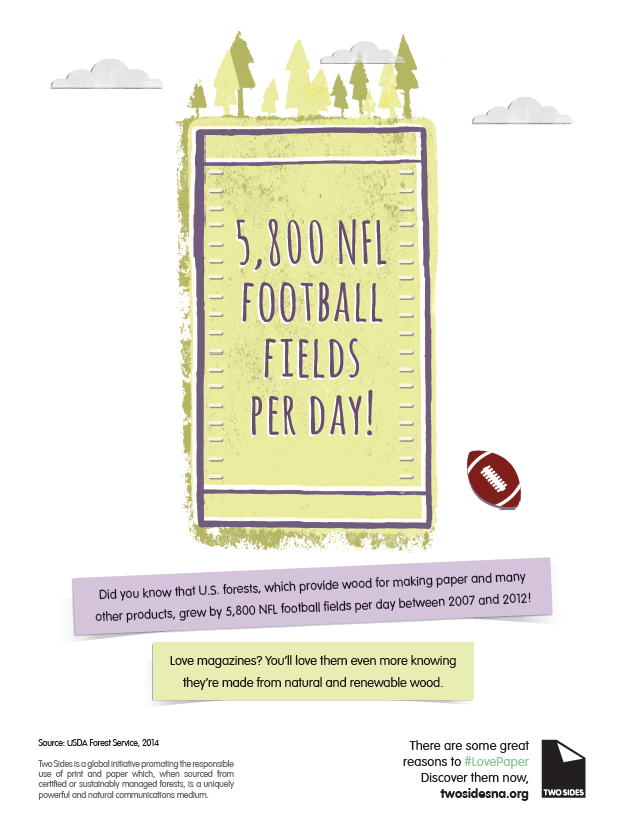 As the forest community begins to join the conversation and combat the many misconceptions that are so pervasive in today’s media, this is the kind of proactive, confident storytelling that will ultimately lead to education about the sustainable value of our forests.

Forest Management
How Misinformation Produces Flawed Climate and Carbon Policies
This post appears courtesy of guest blogger Nick Smith, who is Executive Director of Healthy Forests, Healthy...
END_OF_DOCUMENT_TOKEN_TO_BE_REPLACED
Forest Management
3 Reasons Forests are Invaluable to Both Humanity and the Environment
Forest2Market recently hosted two students from the British International School in Charlotte, NC in support of the...
END_OF_DOCUMENT_TOKEN_TO_BE_REPLACED

Forest Management
Future Forests + Jobs: Growing Forests and Building a Stronger Economy
A core mission of Forest2Market is to provide fact-based, data-driven insights to stakeholders in the forest...
END_OF_DOCUMENT_TOKEN_TO_BE_REPLACED