Hard on the heels of a Eurostat report that listed the United Kingdom as in danger of not meeting its renewable energy targets by 2020, the U.K government announced it would stop issuing Climate Change Levy Exemption Certificates (LEC) beginning August 1, 2015.

Alasdair Cameron, senior economics campaigner with Friends of the Earth, likened the reversal to “making apple juice pay an alcohol tax,” as it will require electricity generators to pay a climate change tax on renewable electricity that significantly reduces climate change impacts.

Until the July 8, 2015 announcement, the U.K. Department of Energy and Climate Change (DECC) has had three policies in place to incent electricity generators to replace high carbon energy sources with lower carbon, renewable sources. These policies include the Climate Change Levy (CCL), which consists of two taxes—the main rate and the Carbon Pricing Support (CPS) mechanism rate—and the Renewables Obligation support mechanism (RO), a subsidy. Both the CCL and the CPS are taxes assessed against generators for the use of fossil fuels in electricity generation.

In 2001, in an effort to encourage the use of renewable sources of electricity as well as discourage the use of fossil fuels, DECC began issuing tradable Levy Exemption Certificates (LEC), which provided generators with exemptions from the CCL main tax (not the CPS) for renewable electricity they supplied to end users. The announcement that LECs would no longer be issued came as a surprise to the industry, which had been expecting the government to announce either a review of the levy or the gradual winding down of the exemption. The government’s mid-game rule change, which comes with one month’s notice, leaves generators with little time to compensate for the revenue loss.

What This Means for Generators and their Suppliers

In the short-term, the revenue losses are expected to be significant. The value of a LEC is currently 5.41 £/MWhe ($8.44 US). For a company like Drax, which is converting the U.K.’s largest coal station to biomass in the form of wood pellets, the initial estimate of the financial impact of this policy change is a reduction in earnings of £30 million ($47 million US) in 2015 and £60 million ($94 million US) in 2016. Because the whittling down of this exemption was anticipated in the industry before 2020, the impact beyond 2016 is likely to be minimal. The government estimates that it will raise approximately £450 million ($702 million US) in the current fiscal year, and that this number will rise to £910 million ($1.42 billion US) in 2020-21.

When we put this exemption in context of other incentives to produce electricity from renewable sources, the impact of its termination seems unlikely to make a meaningful difference in demand for wood pellets. Two other inducements provide much more in revenue or savings than the LEC.

The discontinuation of the LEC represents a less than 8 percent reduction in total incentives. It seems unlikely that this would derail the UK market for industrial wood pellets as a source of renewable energy. While it reduces generator revenues, projects will not turn unprofitable as a result or shut them down. As a result, the flow of pellets from current facilities will remain unfettered, as they are already sold under long-term contracts to facilities that have committed investments.

As long as these incentives remain in place or are replaced (already in process is the replacement of the RO mechanism with Contracts for Difference, or CfD), producing electricity from wood pellets will continue to be the least costly path for helping the UK reach its carbon emissions goals. As a result, wood pellet demand is likely to be unaffected.

A more serious repercussion of this abrupt reversal of the policy may be its effect on investments in renewable projects. Because this is just one in a series of policy reversals, the pattern creates an atmosphere of uncertainty that will “create mistrust among investors and private industry,” according to Neil Woodford, a U.K. fund manager who wrote an open letter to the government after the announcement. “If Government cannot be trusted to fulfil its long-term commitments then it will have to accept that it cannot rely on support from institutional investors. That would not be a good outcome for the UK economy.

He continued, “I have to conclude that the Government has either failed to understand the implications of this policy change or wilfully ignored the interests of capital providers in this vital industry. Long-term capital projects need consistency that extends way beyond the length of the political cycle.”

And the pattern continues to unfold. On July 22, UK Energy and Climate Secretary Amber Rudd announced that the government would remove the guaranteed level of subsidy for biomass conversions and co-firing projects for the remainder of the RO, a move estimated to save the government and rate payers £500 per year in 2020/21.

Together with discontinuing subsidies for onshore wind farms and increased support for fracking and North Sea oilfield investment, the energy policy of the current government may affect new investments in renewable energy. Catherine Mitchell, a professor of energy policy at the University of Exeter, foresees trouble if this continues: “[this energy policy] reduces the chances of us meeting our various legal requirements, and presents serious political risk to investors, which in itself makes energy more expensive.”

Bioenergy
Enviva to Double Wood Pellet Production, Signs MOU With First US-Based Customer
The largest export wood pellet producer in the US South has reached an important milestone, as industrial demand for...
END_OF_DOCUMENT_TOKEN_TO_BE_REPLACED 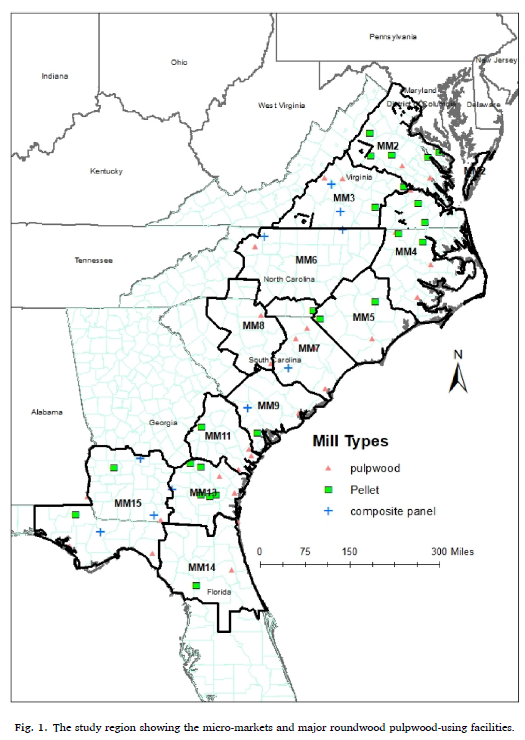 Timber Prices
Quantifying the Impacts of Wood Pellets on Pulpwood Stumpage Markets in the US South
This is an abbreviated version of Dr. Rajan Parajuli’s article published in Volume 317 of the Journal of Cleaner...
END_OF_DOCUMENT_TOKEN_TO_BE_REPLACED