Per a newly-released report from a joint collaboration between the United Nations Environmental Programme (UNEP) and the Frankfurt School (FS), the annual global investment in new renewables capacity in 2015 was $266 billion—more than double the estimated $130 billion invested in coal and gas power stations in 2015. Total investments in renewables, including early-stage technology and R&D, as well as spending on new capacity was $286 billion or 3 percent higher than the previous record set in 2011. Since 2004, the world has invested an impressive $2.3 trillion in renewable energy.

Renewables also added more to global energy generation capacity than all other technologies combined in 2015 and, for first time, developing world investments in 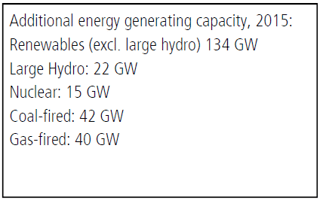 The 134 gigawatts of renewable power added worldwide in 2015 compares to 106GW in 2014 and 87GW in 2013. UNEP Executive Director Achim Steiner noted that, "Renewables are becoming ever more central to our low-carbon lifestyles, and the record-setting investments in 2015 are further proof of this trend.” He continued, “Access to clean, modern energy is of enormous value for all societies, but especially so in regions where reliable energy can offer profound improvements in quality of life, economic development and environmental sustainability.”

Despite the surge in wood pellet demand in recent years, the UNEP/FS report highlights the fact that new global investment in renewables is trending towards wind and solar, with smaller sectors losing relative importance. In 2015, this trend continued: 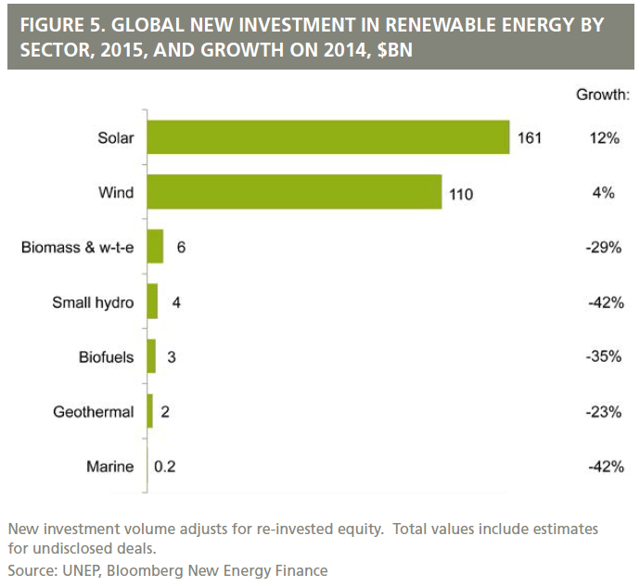 As noted in Figure 5 above, global investment in solar companies led all renewables in 2015, but that doesn’t tell the entire story. The global number represents public market funding, as well as venture capital (VC) and private equity (PE) funding, which tends to go towards newer technologies rather than more mature ones. When removing the public market numbers, it’s clear that solar is where VC and PE investors are focusing their efforts for the near-term; $2.4 billion in VC and PE funding commitments for this technology in 2015 was the most seen since 2008, representing an increase of almost $1 billion in 2014.

The falling cost of solar panels over the last few years has dramatically increased the number of potential end-users of this technology. As a result, investors have shifted their focus towards technologies that are designed to help make solar available to new markets and previously inaccessible sections of society. The UNEP report continues, “Fenix International, for instance, raised $12.6 million in Series B funding to help it supply mobile-enabled solar systems to off-grid communities in Africa.”

It is important to remember that the UNEP report covers new investment into each sector, not existing or recent investment in ongoing operations or facility conversions. As technology becomes more affordable in the solar sector, it will naturally be more appealing in the near-term because it is a resource that doesn’t require the harvesting of a raw material and any subsequent infrastructure, supply chain and regulatory management schemes. The sun shines in every corner of the globe and its energy can be captured and reused for generating electricity on both small and large scales. There is therefore great investment appeal with this resource.

But biomass has been a proven renewable resource for thousands of years, and it is still an attractive option for a relatively seamless conversion from coal to a carbon-neutral feedstock. Wood raw materials are abundant and offer scalable flexibility for the production of thermal energy and electricity, which is why many European utilities have relied on wood pellets as a feedstock of choice during plant conversions.

A Study in Biomass Success

Drax Power in the UK has demonstrated that investment in this type of conversion is sound business practice; in 2012, the company began the conversion of three of its boiler lines from coal to biomass, which included the installation of a new raw materials handling infrastructure. Now in the process of converting the third and final unit, the transition to biomass represents a $600 million dollar investment.

Drax consumed more than 5 million metric tons of wood pellets in 2015 and this figure will rise to 7 million annually with the completion of the third unit. The company has also invested in the wood pellet supply chain by securing its own supply via vertical integration. Drax operates two new manufacturing facilities in the US South that will supply 900,000 metric tons of wood pellets, and the company is in the process of building a pellet storage/shipping facility in Baton Rouge, LA. These operations represent an additional investment of $350 million, despite regulatory uncertainty at home in the UK.

Recently, the UK’s Energy and Climate Change Committee (CCC) scrapped a competition for £1 billion of government funding that would support carbon capture. The White Rose Project, based at the Drax power station near Selby, was one of two proposals competing for a share of the government money when the competition was abandoned. It is no secret that Drax’s success at converting to biomass has been driven by such subsidies; the company has been at the forefront of green energy production precisely due to governmental emissions targets, renewables goals and related incentives.

It is no wonder, then, that the reduction of funding would therefore limit VC and PE investment in biomass technology and plant conversion in the UK. The CCC also noted that the government’s removal of support for onshore wind power and solar generation had damaged investor confidence in that sector as well. Committee chairman Angus MacNeil said, “Nervousness among investors will make it harder and more expensive to build the new energy infrastructure that we need. Any increase in the cost of project capital will ultimately get passed on to consumers through higher energy bills.”

As noted above, investment in renewables in the developing world was significantly higher in 2015. Part of the reason for this was because of the enormous investment in China; more than a third of all the renewables investments around the world in 2015 occurred there. At the same time, clean energy spending in Europe slowed—down 21 percent from $62 billion in 2014 to $48.8 billion in 2015.

New investment was lower in Europe because many of these countries have existing green energy intiatives. Ulf Moslener, professor for Sustainable Energy Finance at Frankfurt School and co-author of the report, addressed why he believes Europe's investments are declining. "These economies already have a significant part of renewables, and are now struggling with adapting their energy systems to these new technologies. Storage will play a large role in fixing that."

Per professor Moslener’s contention and also worth consideration is that fact that these countries also need to update their electricity grids with additional storage capacities before they will be able to fully capture all the renewable energy they can now generate. This is a very important distinction when analyzing the larger numbers; the proper infrastructure must be in place for renewables to pay economic and environmental dividends down the road. Much of Europe has already done the work of converting from coal to renewables, and must now adapt existing infrastructures as a next step.

"We're really at a very interesting juncture... the leading markets—Germany, Denmark, Spain, the UK—are going to do some pretty substantial structural changes," Michael Liebrich, chairman of the advisory board at Bloomberg New Energy Finance and co-author of the report, recently stated. "I'm not surprised they've slowed down investments while they do that."

Bioenergy
The Value of Carbon Emission Avoidance with Biopower Generation
Per a recent report published by the National Petroleum Council (NPC)—an advisory committee that represents the...
END_OF_DOCUMENT_TOKEN_TO_BE_REPLACED

Bioenergy
WSJ’s Incomplete Reporting Perpetuates Misconceptions About Bioenergy
A recent article published in the Wall Street Journal notes that the increased consumption of wood pellets in the...
END_OF_DOCUMENT_TOKEN_TO_BE_REPLACED