Reflecting the view that “manufacturing is starting to rebound, but full recovery is a long way off,” total industrial production (IP) increased 1.4 percent in May (-15.3 percent YoY), as many factories resumed at least partial operations following virus-related shutdowns. Even so, total IP in May was 15.4 percent below its pre-pandemic level in February. Manufacturing output rose 3.8 percent in May after sharp drops in March and April. Most major industries posted increases, with the largest gain registered by motor vehicles and parts (+120 percent MoM, although that index remained more than 60 percent below its February 2020 level). Mining and utilities declined 6.8 percent and 2.3 percent, respectively.

The Institute for Supply Management’s (ISM) monthly sentiment survey showed US manufacturing moving back into “an expected expansion cycle” during June. The PMI registered 52.6 percent, up 9.5PP from the May reading. (50 percent is the breakpoint between contraction and expansion.) All of the sub-indexes showed improvement: the drop in slow deliveries (-11.1PP) indicates firms are ramping up activity, and thetick downward in customer inventories (-1.6PP) is suggestive of a potential upturn in demand.

The non-manufacturing sector also jumped back into expansion (by a record +11.7PP, to 57.1 percent). The most noteworthy changes in the NMI sub-indexes included business activity (+25.0PP), new orders (+19.7PP), and exports (+17.4PP). “Respondents remain concerned about the coronavirus and the more recent civil unrest,” said ISM’s Anthony Nieves, but “are cautiously optimistic about business conditions and the economy as businesses are beginning to reopen.”

Of the industries we track, only Paper Products contracted. Comments from respondents included:

Findings of IHS Markit’s June surveys paralleled those of their ISM counterparts, although both Markit surveys remained in contraction. “June saw a record surge in the PMI’s main gauge of business activity in the U.S. as increasing numbers of companies returned to work and expanded their operations amid the reopening of the economy,” wrote Markit’s Chris Williamson. “The survey points to a strong initial rebound from the low point seen at the height of the pandemic lockdown in April, with indicators of output, demand, exports and employment all showing steep gains… Many, however, remain constrained by social distancing measures.” 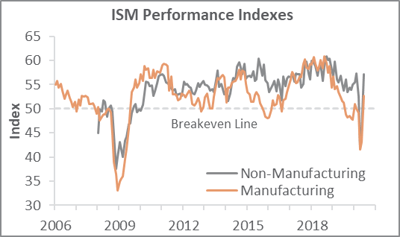 The consumer price index (CPI) retreated by 0.1 percent in May (+0.1 percent YoY) after falling 0.8 percent in April. Declines in the indexes for motor vehicle insurance, energy, and apparel more than offset increases in food and shelter indexes to result in the monthly decrease in the seasonally adjusted all-items index. The gasoline index declined 3.5 percent in May, leading to a 1.8 percent decline in the energy index. The food index, in contrast, increased 0.7 percent as the index for food at home rose 1.0 percent. 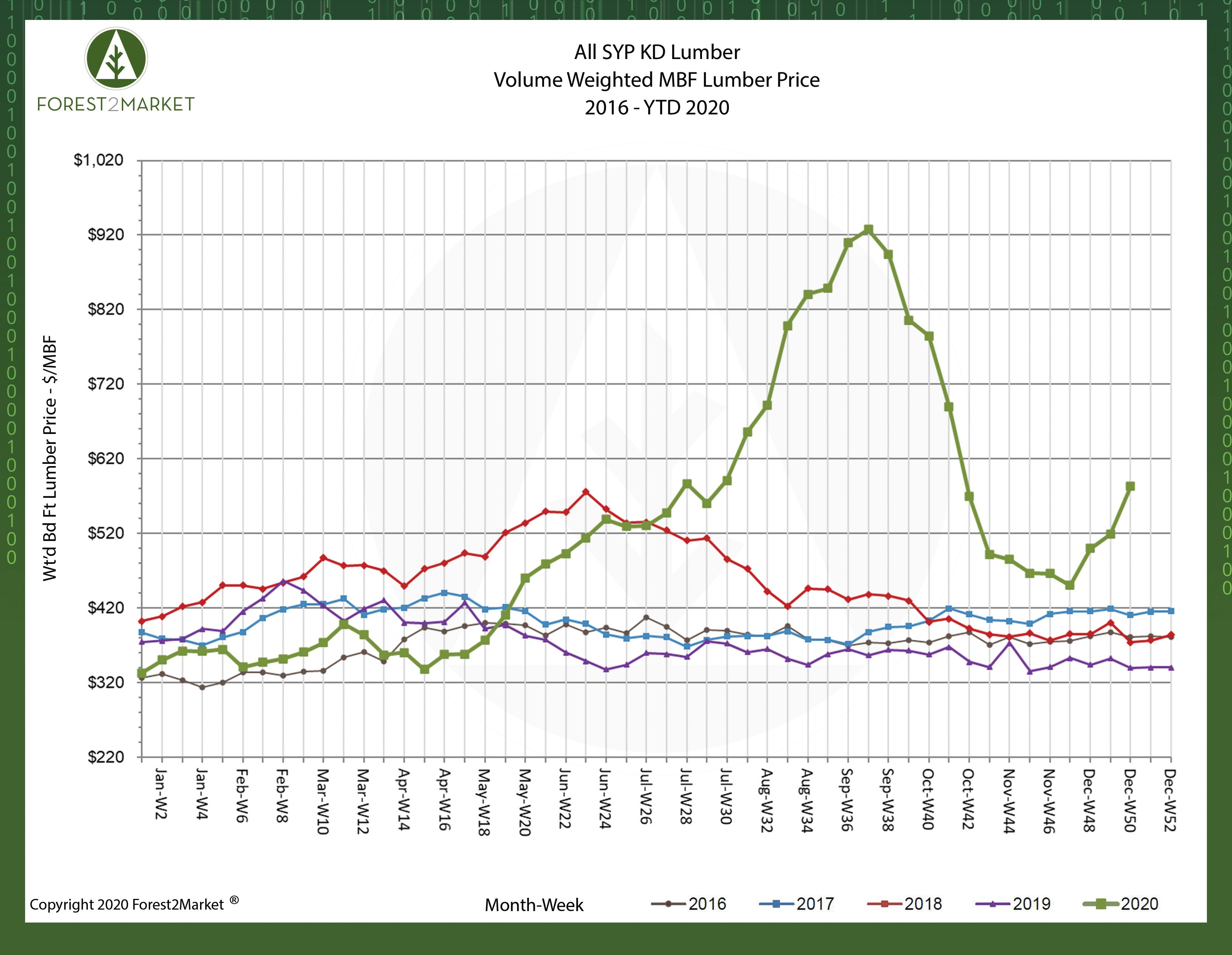 Lumber Prices
Lumber Market 2020 Year in Review: What’s Next?
It’s been a long, strange year, to be sure. While my annual predictions for the forest industry in 2020 didn’t miss...
END_OF_DOCUMENT_TOKEN_TO_BE_REPLACED

US forest industry
2020's Impact on the PNW Forest Sector
Like other regions in the US, the forest products industry in the Pacific Northwest (PNW) has remained surprisingly...
END_OF_DOCUMENT_TOKEN_TO_BE_REPLACED