US forest industry performance in January and February was recently reported by both the US government and the Institute for Supply Management.

“Looking ahead, the supply chain challenges posed by the coronavirus and Boeing production halt will combine with the steadfast headwinds from weak global growth and protectionist trade policies to prevent a resuscitation of manufacturing activity,” said Oxford Economics’ Oren Klachkin. 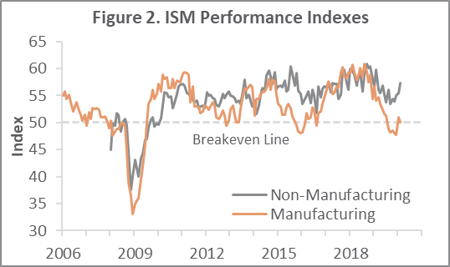 The Institute for Supply Management’s (ISM) monthly sentiment survey showed that U.S. manufacturing barely expanded in February. The PMI registered 50.1 percent, down 0.8PP from the January reading. (50 percent is the breakpoint between contraction and expansion.) Slumps in imports (-8.7PP) and input prices (-7.4PP), declines in production (-4.0PP) and new orders (-2.2PP), and a surge in slow deliveries (+4.4PP) suggest weakening conditions.

Meanwhile, results of the non-manufacturing sector survey were much more upbeat; the NMI accelerated (+1.8PP) to 57.3 percent. New orders (+6.9PP), exports (+5.5PP) and employment (+2.5PP) were the main drivers behind the increase.

Of the industries we track, only Ag & Forestry contracted. Respondent comments included the following:

As has become common in recent months, findings of IHS Markit’s February surveys were mixed relative to their ISM counterparts. The service-sector surveys, in particular, showed markedly different conditions: ISM’s NMI was at its highest level in a year whereas Markit’s services PMI was at its weakest since October 2013.

The consumer price index (CPI) rose 0.1 percent in January (+2.5 percent YoY) after rising 0.2 percent in December. The index for shelter (+0.4 percent) accounted for the largest part of the increase in the seasonally adjusted all-items index, with the indexes for food (+0.2 percent) and for medical care services (+0.4 percent) also rising. These increases more than offset a decrease in the gasoline index, which fell 1.6 percent in January. The energy index declined 0.7 percent, and the major energy component indexes were mixed.

The producer price index (PPI) advanced 0.5 percent (+2.1 percent YoY); 90 percent of the increase in the headline number is attributable to prices for final demand services, which climbed 0.7 percent. By contrast, the index for final demand goods inched up 0.1 percent.

“The 0.5 percent jump in final producer prices in January was driven by one-off factors, including a jump in retail margins and an administered increase in Medicare hospital payments,” observed Capital Economics’ Michael Pearce.